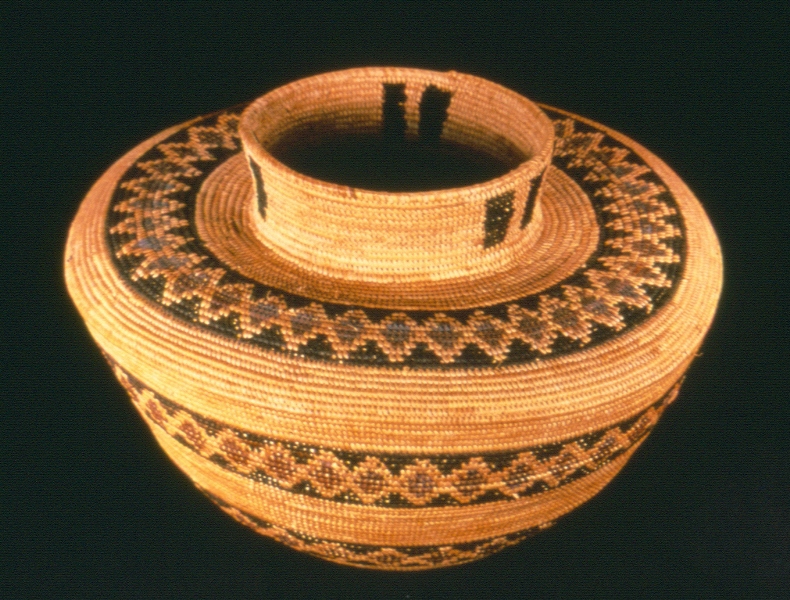 California State Parks manages the largest and most diverse natural and cultural heritage holdings of any state agency in the nation. Our 280 parks protect and preserve an unparalleled collection of culturally and environmentally sensitive features and ancient habitats, including many significant California Indian villages.

Outstanding examples of rock art, sacred sites and cultural preserves are part of California’s most vital heritage. Before the arrival of Europeans settlers in the mid-1700’s, there were more than 300,000 indigenous people residing throughout California.

These parks and museums serve as centers for learning the history, practices and beliefs of California’s Indian people. Each year, tens of thousands of California school children gain an appreciation of the richness and significance of California Indian heritage by visiting one or more of the state’s parks or museums.

Today, visitors are able to see and enjoy cultural representations of these early societies, from rock paintings to ancient village sites, from reconstructed dwellings to museum exhibits. By attending programs and special events, the public can also learn about contemporary California Indian culture.

California State Parks maintains a commitment to contemporary California Indian culture by partnering with tribes throughout the state and Indian organizations to support their cultural activities.

Ahjumawi Lava Springs State Park: "Where the waters come together...." is a translation of the California Indian word Ahjumawi, which is also the self describing word used by the band of Pit River of Indians who still inhabit the area. Within the park and on nearby stretches of the Tule River and Ja-She Creek are some of the best examples of "stone fish traps" made by native Ajumawi fishermen. The park contains bedrock mortars, village sites and rock art sites. Ahjumawi is a place of exceptional, even primeval, beauty. Location: Fall River Mills Park Unit Phone: 530-335-2777

Anza-Borrego Desert State Park:  With over 600,000 acres, Anza-Borrego Desert State Park is the largest state park in California (and in the contiguous United States). Included in the 12 wilderness areas and miles of hiking trails, the park provide visitors with an unparalleled opportunity to experience the wonders of the Colorado Desert and adjacent foothills and mountains. Learn about the archaeology, prehistory, and history of the park at the new exhibits in the Visitor Center at the park headquarters complex in Borrego Springs. In addition, researchers can access the district's substantial collection of prehistoric and historic artifacts and documents housed at the Begole Archaeological Research Center.  Field trips and educational programs are sponsored by the park's cultural resources staff in partnership with the district's Colorado Desert Archaeology Society volunteers. Several interpreted trails in the park provide the visitor with opportunities to visit ancient Cahuilla and Kumeyaay village sites, hunting trails and rock art. There is a California Indian museum in the park that houses valuable artifacts from many of the local Indian tribes.  Anza-Borrego Desert State Park contains thousands of archaeological sites.         Location:   San Diego County     Park Unit Phone:  760-767-5311

Chumash Painted Cave State Historic Park:  The sandstone cave houses at this park depict religious drawings by Chumash Native Americans, as well as likenesses of coastal fishermen that date back to the 1600s. Found above Santa Barbara in a steep canyon, the site preserves these fine examples of Native American art on the side walls of the rock shelter.  The pictographs made by Chumash people in the sandstone cave are some of the best examples of painted rock art in California.        Location: San Marcos Pass    Park Unit Phone: 805-733-3713

Clear Lake State Park:  This park has a self-guided Indian Nature Trail through the site of what was a former Pomo Indian tribal village.     Location: Kelseyville   Park Unit Phone: 707-279-4293

Cuyamaca Rancho State Park:  Cuyamaca Ranch SP was home to Kumeyaay people from prehistoric times into the nineteenth century. The archaeological remains of this occupation are often encountered along the park's many riding and hiking trails. The park has a display of a California Indian residence dating back at least 7,000 years and bedrock mortars.   Location: Descano   Park Unit Phone: 760-765-0755

Indian Grinding Rock State Historic Park:   This park contains 1,185 granite bedrock mortars, which is the largest collection of mortars in North America.  Chaw’se Regional Indian Museum features a variety of exhibits and an outstanding collection of Sierra Nevada Indian artifacts, including those from Northern, Central, and Southern Miwok, Maidu, Konkow, Monache, Nisenan, Tubatulabal, Washo and Foothill Yokut.  In the Miwok language, Chaw'se refers to the grinding holes where acorns, seeds, and other items were processed. This park includes a Miwok village complete with a roundhouse, bedrock mortars and petroglyphs. The museum includes 1,500 objects including feather dance regalia, stone tools, and other items that represent the material culture of the Sierra Miwok. The Chaw'se museum collections and interpretive exhibits include "both past and present-day" objects used by Miwok people.     Location: Pine Grove
Park Unit Phone: 209-298-7488

Lake Oroville State Recreation Area:  This California State Parks' unit has displays of Maidu culture and lifestyle and two audio visual presentations, including “Ishi, The Last Yahi.” There is also a self-guided Nature Trail that explains the use of local plants by the Konkow tribe.   Location: Oroville    Park Unit Phone: 530- 538-2200

La Purísima Mission State Historic Park:    "Misión la Purísima Concepción de María Santísima," founded in 1787, is one of the most completely restored missions of the 21 Spanish missions in California. This is the largest and most authentic mission restoration project in the American West and contains the remains of a reconstructed Indian village.   Location: Lompoc      Park Unit Phone:  805-733-3713

Mc Arthur-Burney Memorial Falls State Park:  The park's centerpiece is the 129-foot Burney Falls, which is not the largest waterfall in the state, but possibly the most beautiful and is a sacred area for California Indians. Burney Falls is know as a "power place" by Indians, who saw water as a "supernatural boundary." Burney Creek originates from the park's underground springs and flows to Lake Britton, getting larger along the way to the majestic falls.
Location:   Burney         Park Unit Phone:  530-335-2777

Morro Bay State Park:   The "Chumash Garden" is part of the Museum of Natural History located in Morro Bay State Park.  Visitors can learn how the Chumash people used native plants of this area in their daily lives.
Location:  Morro Bay   Museum Phone: 805-772-2694

Sue-meg State Park:  This park includes Sumeg Yurok Village with traditional style family houses which are currently used by Yuroks for education of their youth and to share their culture.  In the Yurok language, Sumeg refers to an ancient ceremonial and important gathering place. Sue-meg State Park on the North Coast of California was primarily Yurok Indian Territory with the Wyiot tribe to the south, Tolowa tribe to the north, and the Karuk and Hoopa tribes to the east. The Yurok Village consists of homes, a sweathouse, changing houses and a dance house. The surrounding archaeological sites have great importance. The village houses an original dugout redwood canoe, which was crafted by the late Yurok canoe maker, Dewey George. This park contains a Native American Plant Garden which has the plants used in medicinal, basketry, subsistence and ceremonial purposes of the Yurok Tribe.   Location: Trinidad
Park Unit Phone:  707-677-3570

Santa Cruz Mission State Historic Park:  On display is circa 1824 row-type housing, the only surviving Indian housing of its type among the California missions.     Location: Santa Cruz   Park Phone Number: 831-429-2850

Sonoma State Historic Park: Unlike most parks with a plot of land and geographical boundaries, Sonoma State Historic Park is a series of historic attractions in several locations within the community. The park is comprised of six sites with the "Sonoma Barracks" having valuable interpretation activities of California Indian culture.          Location: Sonoma
Sonoma Barracks Phone: 707-939-9420

State Indian Museum: Cultural items include basketry, beadwork, clothing and exhibits about the ongoing traditions of various California Indian tribes; emphasis on Central Valley groups including the Yana, Yokuts Monache, Patwin, Wintu, Maidu, Koncow, Nisenan, Tubatulabal and Nomlaki. There is a special display about “Ishi, Last of the Yahi Indians.”  This museum exhibits over 700 objects made by California Indians. Illustrating the theme "A Continuing Culture," the objects are mounted in displays interpreting spirtual activities, objects needed for daily living and examples of excellence in basketry. In June of each year the museum holds an "Honored Elders" Day when California Elders are recognized for their life long contributions to continuing California Indian culture. Another annual event is "Acorn Day" in October where demonstrations involve making traditional acorn foods.
Location: Sacramento
Museum Phone:  916-324-0971

Sutter Buttes State Park:  Before modern levees, winter storms frequently turned the Sacramento Valley into an inland sea. The Buttes were an island refuge for California Indians, settlers and wildlife. The Maidu Indians are know to have called them “Histum Yani”  which some Indians translate as “Spirit Mountain."  In April 2005, the State Park and Recreation Commission classified the Buttes as a State Park, the newest unit in the California State Park System.
Location: Sutter County       Note: This park is not open to the public at this time.

Tomo-Kahni State Historic Park:   Kawaiisu Native American Village was created as a unit of California State Parks in 1993 to protect and preserve the integrity of the location. Overlooking Sand Canyon to the east and the Tehachapi valley to the west, Tomo-Kahni, or "Winter Village," was the site of a Kawaiisu (Nuooah Village). The Kawaiisu migrated from the Great Basin and made Tehachapi their home for two to three thousand years. The Kawaiisu are noted for their finely woven baskets of intricate and colorful design. Aside from the Kawaiisu winter village, there are trails and rock art. Due to the extremely sensitive nature of the site, Tomo-Kahni is available to the public by tour only. These tours are led by trained State Park Volunteers on weekends during the spring and fall months.   Location:  Tehachapi Mountains
Park Unit Phone: 661-942-0662

Wassama Round House State Historic Park:   Historic site used as a ceremonial meeting placed by California Indians is preserved in this park. It includes a reconstructed “dance house” still used for Miwok and Yohut celebrations. The Round House is open by appointment only, 11 am to 4 pm.  Location: Friant    Park Unit Phone:  599- 822-2332

Washoe Meadows State Park: This park occupies 620 acres of meadow and woodland in the valley at the base of the escarpment leading to Echo Summit. The park was named for the Native Americans who inhabited the area for thousands of years.  Location:  South Lake Tahoe        Park Unit Phone: 530-694-2248