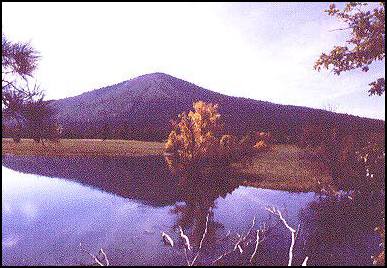 This paper examines Pomoan cosmology, the supernatural landscape, and the special portals through which individuals accessed the other world. Of special importance are the boundaries, which delineated the cultural and supernatural realms, thus creating a supernatural frontier in Pomoan cosmology. As will be seen, the frontier manifested itself cognitively in a number of areas, including rock, water, elevation, menstruation, and death.

Like most California Indians, the Pomo perceived a tripartite division of their world. There were Upper and Lower Worlds filled with supernatural power, and a Middle World in which people lived. Structurally, the Pomo's Middle World landscape was comprised of communal lands, which I refer to as community, and wild lands, which I refer to as wilderness. By community, I mean those lands, which were immediately adjacent to a village, in other words, the village "fringe," the village itself, and the primary roads which linked the different villages. Therefore, community represents those lands, which were considered to be under the direct control of people and their cultural laws. On the other hand, wilderness refers to those lands which the Pomo did not consider to be under their direct control, but rather subject to natural and/or supernatural laws.

The Pomo thought of the village as being the "Inside," and the wilderness as being the "Outside." The literal meaning for "Inside" was "inside the house," while the word for "house" usually connoted "village" as well. Thus, the Inside was another way of saying inside the community, or of the culture. On the other hand, the Outside generally denoted the wilderness, the wild areas to which one went for hunting and gathering wild foods. Thus, within Pomoan cosmology, there existed a dualism, which contrasted the concepts of culture and nature, domestic and wild, and community and wilderness.

In the village, power was of a communal nature, and it required elaborate rituals, which combined the energies of numerous individuals to import supernatural intervention from the Outside. In the wilderness, however, personal power could be had alone, by way of supernatural experience.

Although power resided outside culture, the supernatural frontier extended out of the wilderness and into one's community. The supernatural realm interfaced with the Pomo community in two main areas: menstruation and death.

The mystery and power of menstruation suggested to the Pomo a contact point with the supernatural realm. Supernatural power dwelled within or periodically visited the adult women of a community. Menstrual power was seemingly viewed as "pure" power, and thus difficult to control. The Pomo restricted women during their menses so as to prevent injury to both the affected women and those around them.

Death offered another contact point with the supernatural. Upon death, the ghost of the deceased prepared for the journey to the land of the dead. During that time, the ghost lingered around the corpse. Those coming in contact with the corpse risked exposure to the raw power of the supernatural. The Pomo developed elaborate controls to protect themselves from the dangers associated with mourning and the disposal of the dead. Mourners and undertakers alike restricted their activities and diets for days or even months following a loved one's death. Hunting and the eating of meat were especially prohibited during this period. 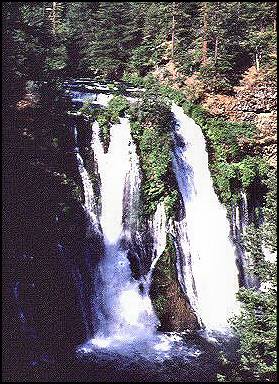 Although a form of communal or corporate power dwelled within the village, real power resided in the wilds. The wilderness abounded in power. It was manifested in the rocks, springs, animals, and trees. Power was sought after by some individuals, and it occasionally came to those who did not seek it.

Once Outside, an individual in search of power found an appropriate portal through which to access the supernatural world. These portals were geographic features, such as rock crevices, caves, springs, pools, and mountain tops. Rocks appear to have served as the primary frontier separating the actual and supernatural worlds. Passage through rock was an important aspect of shamanism throughout western North America.


A Pomo ritual which may have included movement through rock involved the ethnographically-documented petroglyph boulders known as "baby rocks." The spirits of future children dwelled in these rocks, and were born to parents who followed the proper ritual. The wilderness was full of power capable of affecting human fertility, and certain springs, trees, gopher mounds, rocks, mud, and snakes could cause pregnancy. In addition, a female effigy made of clay, and called "Earth Woman," was given to sterile women to insure conception. Apparently, the powers affecting fertility resided beneath the surface of Mother Earth.

A childless woman fasted for four days before visiting the baby rock alone. The fact that she went alone, and after fasting, thus assuring sensory deprivation, suggests that she may have sought an altered state of consciousness at the petroglyph boulder. If the spirits of the unborn children resided in the rock, the carving of petroglyphs on it may have allowed one entrance into the rock for the purpose of negotiation.

Cupules and grooves are examples of elemental forms, and in many cases, incidental petroglyphs, and thus suggest an association with rituals focused on altered states of consciousness. In other words, the production of cupules and grooves may have been the incidental result of rituals involving rhythmic pounding and/or grooving actions on rock. This site consists of a boulder bearing parallel linear arrangements of cupules and grooves. Numerous pitted boulders occur throughout Pomo territory. Many of these boulders suggest use by shamans and others intent on finding power. 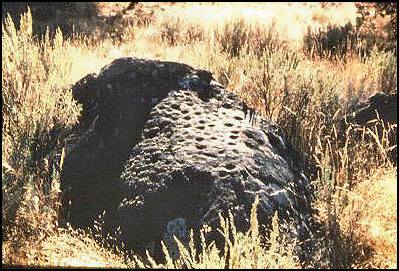 Shamans also may have produced many of the curvilinear and rectilinear petroglyphs found in Pomo territory. Indeed, concentric circles, grids, and star designs, which are all examples of basic phosphene patterns, may represent the entoptic or "behind the eye" phenomena of altered states of consciousness.

A neuropsychological model developed by David Lewis-Williams and Thomas Dowson offers a methodological tool for testing the posited relationship between shamanism and rock art. The model defines seven recurring entoptic forms, and seven principles by which the entoptics are perceived in an altered state of consciousness. 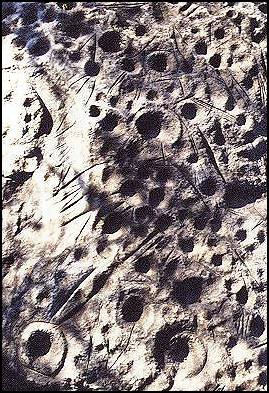 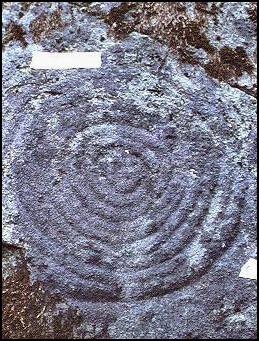 Several Pomo sites are especially suited to discussions of entoptic associations. Many examples of entoptic-like rock art elements occur in close association with crevices and unusual rock features. There is some suggestion that a shaman entered the supernatural world by way of the crevices and other such features while undergoing an altered state of consciousness, and that the petroglyphs found there signify the experience or mark the entrance as such. 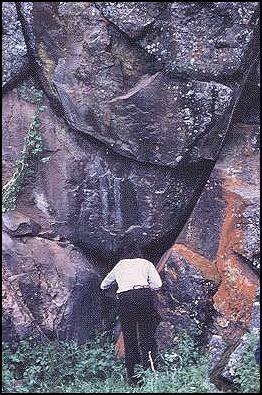 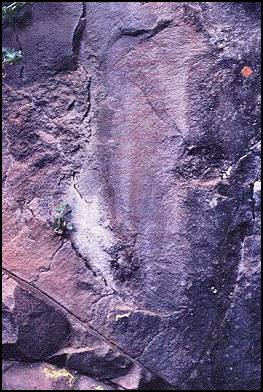 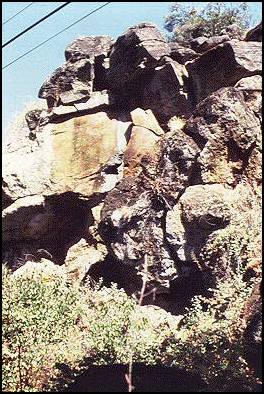 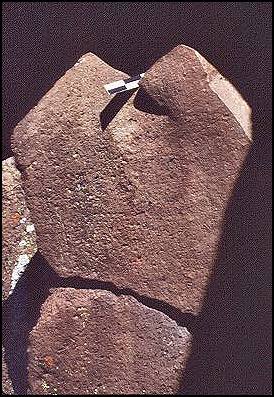 Water was another aspect of the supernatural frontier. Most Pomo rock art sites occur adjacent to or near water sources. There is a strong suggestion that some of the occurrences are associated with fishing rituals. Often, the petroglyph boulders are located within streams at narrow points or near deep holes.

Water served as a portal to the supernatural world. Shamans ritually bathed in ponds and pools in order to supplement or maintain their powers, while the immersion of powerful objects, such as the charmstones of a recently deceased shaman, helped control the objects' dangerous powers. Connection with the supernatural also is indicated by the Pomo belief in Bagil, the supernatural water monster who inhabited springs and punished taboo violators, especially women in violation of menstrual restrictions.

Elevation was a third aspect of the supernatural frontier. Traditionally, most cultures have had a fascination with mountaintops and elevated points. For many, god is closer at hand in high places. The Pomo ethnographic record indicates that ritual training usually occurred in the "hills" away from the villages. Mountains were perceived as holy and powerful places. Some of the Pomo petroglyph sites occur in elevated locations. In several Pomo ceremonies, ritual participants, including those swinging bullroarers to attract the spirits of the supernatural realm, positioned themselves atop the roundhouse, which appears to have symbolized the Upper, Middle, and Lower Worlds. There is some suggestion that the roof of the roundhouse served as a ritual mountaintop during these ceremonies. Additional references to elevation and its connection with the supernatural are found throughout the ethnographic record, including Pomo creation stories, and references to birds and the use of their feathers, and whistles fashioned from their bones, in numerous ceremonies. Birds, especially the condor and eagle, were perceived as liminal creatures capable of connecting the Middle and Upper Worlds, while creatures such as the serpent, and perhaps the lizard, connected the Middle and Lower Worlds.

Menstruation was a fourth aspect of the supernatural frontier. Through their ability to give birth, women were in constant contact with the supernatural realm. Anthropologists Edwin and Shirley Ardener have termed this inherently female contact zone the "wild." During menstruation, and after giving birth, a woman's contact with the supernatural was so intense that she was greatly restricted in her activities and behavior. This was done to protect both the woman and her community. During the period of restriction, the woman's power was potent enough to kill someone by inadvertently looking at them.

Finally, death served to demarcate the supernatural realm as well. Perhaps no activities were as common nor as potentially destructive as those which surrounded death and the ritual disposal of the deceased. The dead went to live in the land of the dead, which was itself a part of the supernatural world. Upon death, and for a period of time afterwards, the ghost of the deceased lingered about the corpse, and visited the favorite haunts of its lifetime. Contact with ghosts thus exposed living members of the community to the supernatural. The Pomo imposed rigorous restrictions on all those affected by death. The family of the deceased and those who assisted in disposing of the corpse, were especially restricted. In essence, however, the entire community was restricted in one way or another.

In conclusion, the ethnographic record indicates that the Pomo recognized a number of areas where the cultural and supernatural worlds coalesced. Through the use of structural models developed by Edwin and Shirley Ardener and Claude Levi-Strauss, and a neuropsychological model developed by David Lewis-Williams and Thomas Dowson, it is possible to identify the portals through which the Pomo accessed the other world. By going into rock or water, or by climbing higher in elevation, one intentionally accessed the supernatural. The supernatural was also accessed naturally by means of menstruation and death. Whereas intentional access was typically a private affair of personal consequence, natural access was often a community affair requiring community regulations. Either way, the Pomo lived their lives surrounded by a supernatural world from which they regularly sought protection, intervention, and benefit.