Yes
Dogs allowed on multipurpose trail or road. Dogs not allowed in the historic buildings or visitor center.

The park is about two miles northeast of Lompoc.
Driving time from Lompoc takes about 5 to 15 minutes depending on your location. Visitors can also bike, jog, or walk to the mission from Lompoc.

For thousands of years, the land containing present day La Purisima Mission State Historic Park served as home to the Chumash people, who spoke one of the Central Chumashan languages which became known as Purísimeño.

The Purísimeño Chumash lived in an area of narrow coastal terraces with rocky exposed shores, sand dunes, and small valleys.  The interface of warm and cold waters, and coastal and inland plant communities created a rich resource environment.  The Chumash lived in villages with domed dwellings called ‘ap. They hunted game and fished—using different fishing innovations for hook and line catches of larger fish.  Important trade networks were developed with the Yokuts in the southern San Joaquin Valley along the Santa Maria and Cuyama rivers.

On December 8, 1787, Father Fermin Lasuén, the Franciscan successor to Father Junípero Serra, founded Misión la Purísima Concepción de María Santísima in the present-day city of Lompoc.  By 1804 more than 1,500 Chumash who’d been removed from their land were laboring at the mission—constructing adobe dwellings, practicing agriculture, and raising livestock.  La Purísima prospered under Father Mariano Payeras, who arrived in 1804.  The mission began producing leading commodities to trade such as soap, candles, and leather.

At the height of its industry, however, La Purísima faced a series of setbacks. Between 1804 and 1807, smallpox and measles struck and several hundred Chumash died. Then, in 1812, violent earthquakes, followed by torrential rains, destroyed the mission’s original buildings. La Purísima was then moved four miles northeast across the Santa Ynez River to a place known to the Chumash people as Amúu and adjacent to El Camino Real, the “Royal Highway” that connected all the missions.

Using local Chumash labor, Father Payeras directed the rebuilding of La Purísima in a linear layout with four-and-a-half-foot-thick walls of adobe to resist the threat of future earthquakes.  In addition to the church, padre’s residence, and Indian Apartments, the new mission also contained a blacksmith shop, tanning vats, and a garden that provided edible plants and medicinal herbs.  An intricate three mile-long water system that included an aqueduct and underground piping was also added, along with abundant farming and grazing lands.  In time, more than 20,000 cattle and sheep roamed the hills, along with hundreds of horses, mules, and other livestock.  This remote but active outpost became the seat of mission government for all California missions from 1815 to 1823.

After Mexico took over California, promises of citizenship to indigenous people were slow to take effect, creating underlying frustrations.  In February 1824, the severe whipping of a Chumash worker at Mission Santa Inés set off a revolt that spread to other missions.  While many Chumash fled north, several hundred occupied La Purísima until soldiers recaptured the mission on March 17.

With the secularization of missions in 1834, the Franciscans lost control and many of the Chumash moved into pueblo communities to work at nearby ranchos.  Subsequent smallpox epidemics decimated the Purísimeño population.  A portion of the former mission lands were granted to Chumash workers Elceario and Pastor Choyama in 1845.  The remainder of the mission lands, including the mission buildings, were purchased by Jonathan (Juan) Temple and later sold to Ramón Malo, who had been granted adjacent Rancho Santa Rita.  After Malo’s death the property passed from owner to owner and the buildings eventually fell into ruin.  The Federal government returned some of the decrepit mission property to the Catholic Church in 1874.  The Union Oil Company bought portions of the land in 1903 and subsequently deeded parcels in 1933 to Santa Barbara County, which in turn deeded the land to the State of California.

Are you looking for a historic setting for your wedding or event?

Main Church: a spacious and warm atmosphere with River-of-Life doors that open out to a view of the animal corrals, with burros, horses, longhorn cattle, sheep and goat-filled meadows. It also boasts original tile floors, and mission-era art covering the walls and altar. This church can accommodate up to 300 guests.

Padre’s Chapel: a generous room with an open beam ceiling, redwood floors, mission-era art and furnishings and a beautiful altar area. This church can accommodate up to 100 guests.

Garden Area: set around a historic fountain within a five-acre garden filled with native and domestic plants typical of a mission garden. This area can accommodate up to 100 guests.

La Sala (The Padre’s Living Room): The River-of-Life doors open out to a view of the Historic Garden. Just steps away from the Padre’s Chapel, it has a cozy atmosphere with a wood burning fireplace, redwood floors and mission-era art and furnishings. This room can accommodate up to 50 people.

To reserve one of these areas for a wedding or special event, please contact our Special Event Coordinator LPM.SpecialEvents@parks.ca.gov

Agents of Discovery is an augmented reality app that allows users to further connect with and discover the vast history of this historic site.  At the park, users are able to search for challenges and answer questions about the park’s vast history.

Public Guided Tours are available Saturday at 11:00 a.m. and 1:00 p.m. and Wednesday through Sunday at 1:00 p.m.  Tours are approximately 90 minutes long.  Guides walk you through the historic 1 mile loop of historic mission buildings and grounds.  This walking tour includes dirt pathways and rustic doorways as well as a few steps during the tour.  If you are interested in joining one of our tours please meet at our visitor center prior to the tour time. 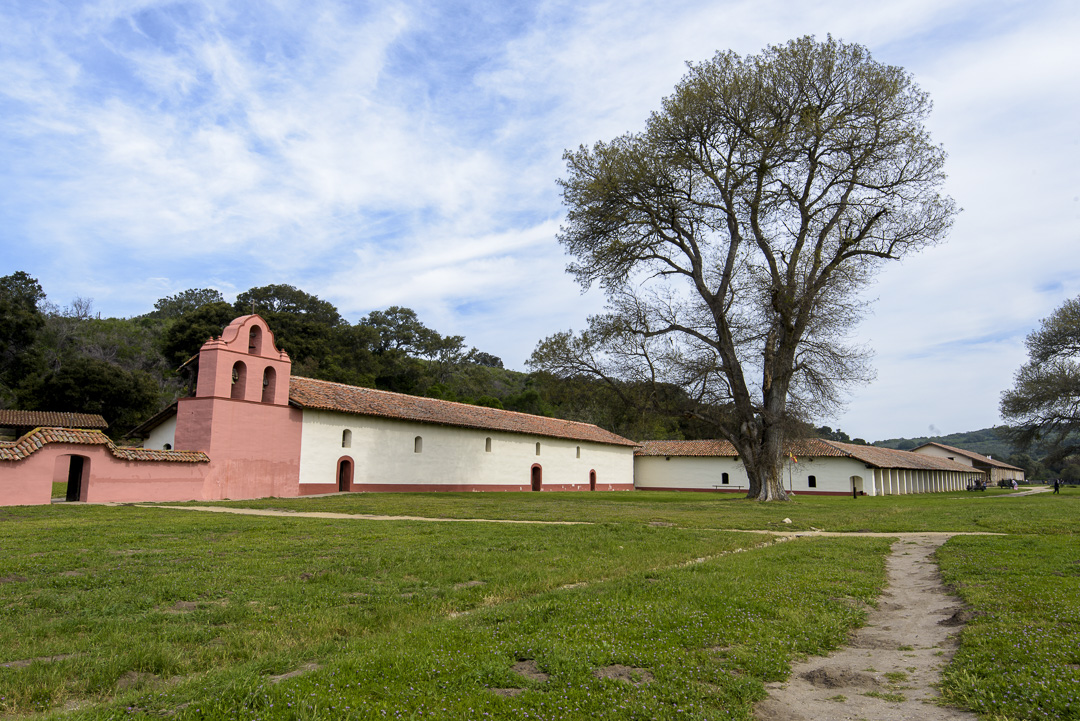 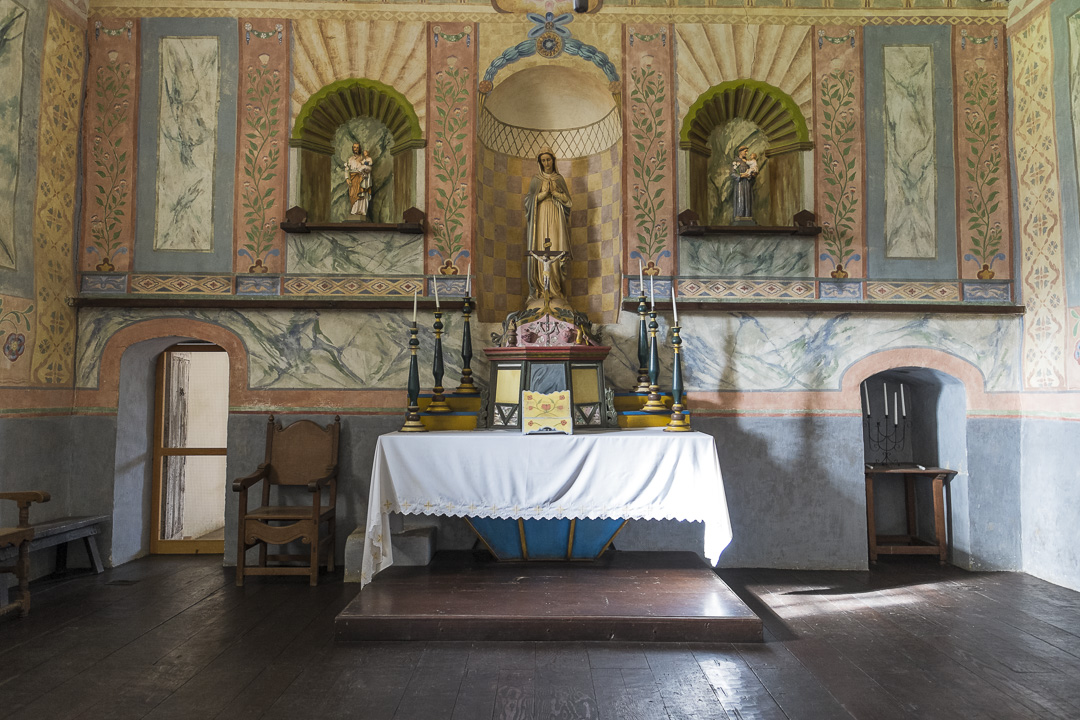 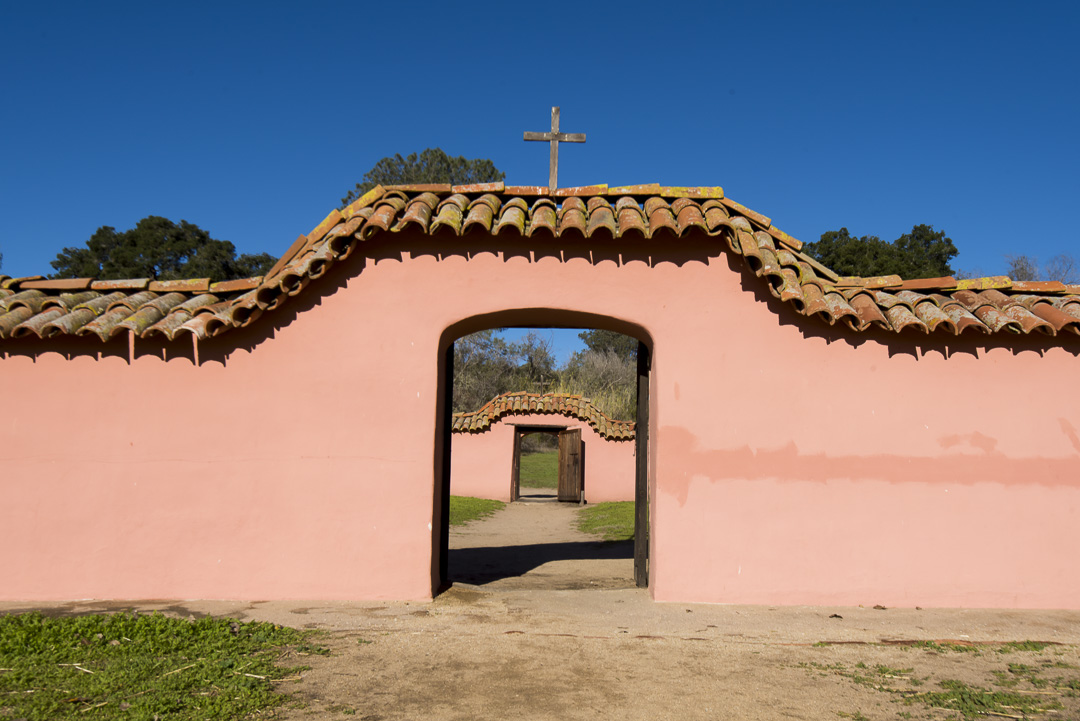 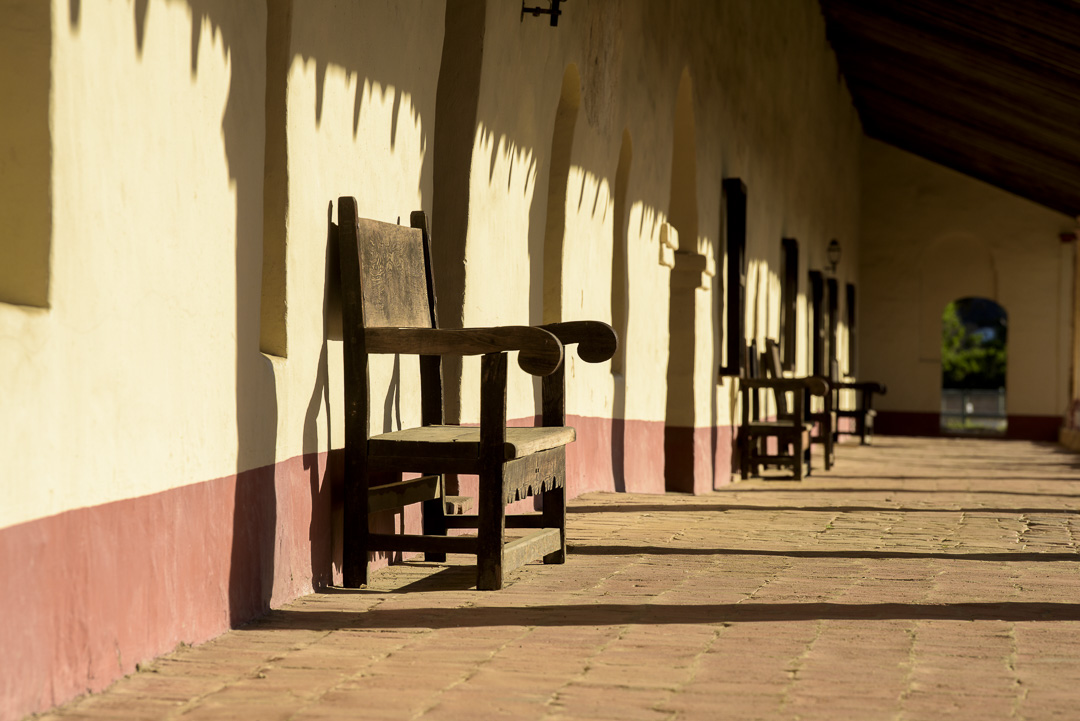 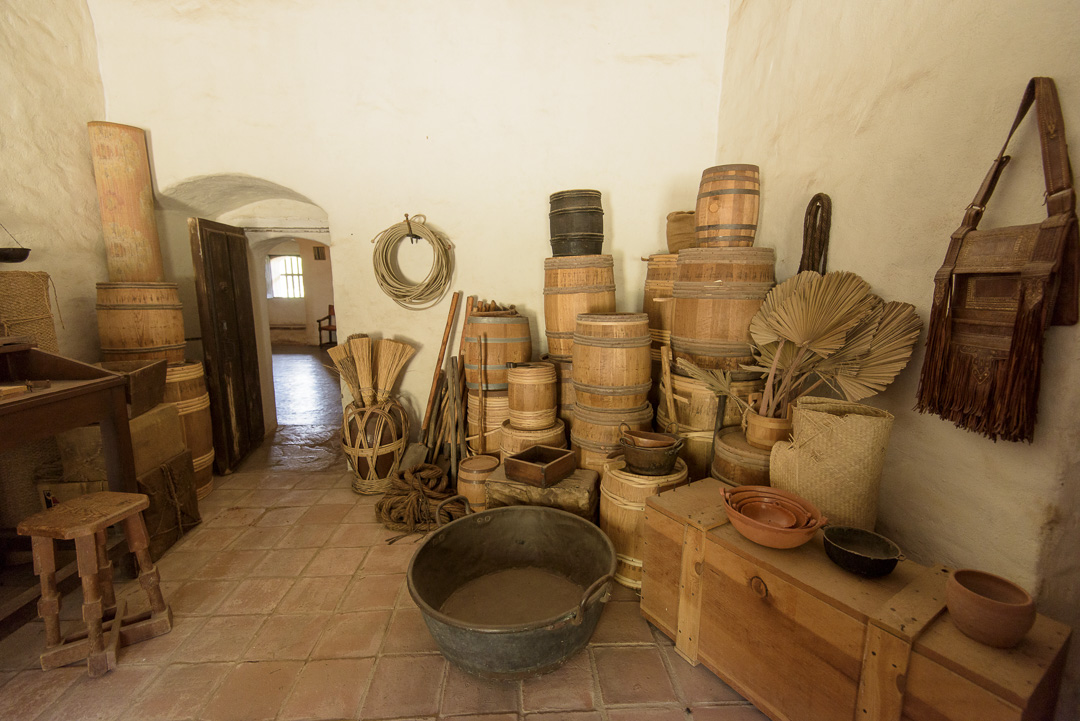 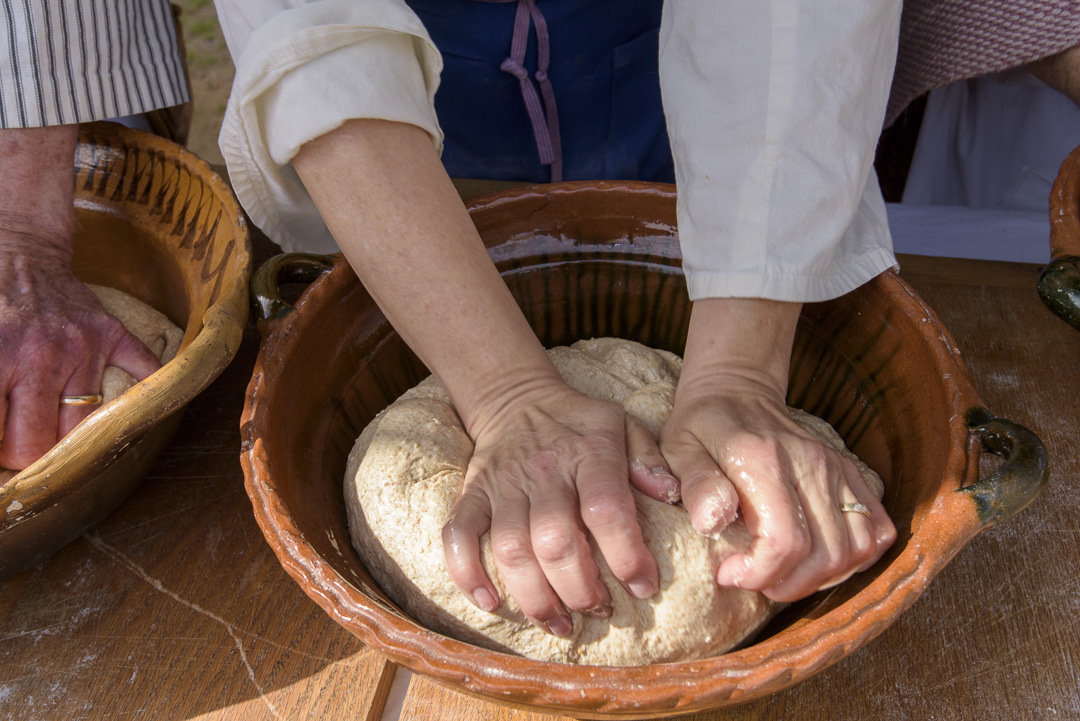 Mission Life Day is a way to explore the crafts of the Mission era like weaving, bread making, pottery, blacksmithing just to name a few.

Buckskin clad members of the American Mountain Men share mountain men history and skills. Cooking, hide preparation and tanning, leather working, rope making, and blacksmithing are among the skills that visitors may experience. Equipment will be on display and tall tales will surround the campfire.

Held in the historic main church of La Purisima Mission to celebrate the founding of the mission.  Founding Day recognizes the day La Purisima Mission was established on December 8, 1787.  The public is invited to attend the free noon mass held each year on this day, and purchase advance tickets for the evening concert.

Hi! Can't make it to the Mission in person? Check out the incredible Virtual Tour complete with videos of our staff explaining various rooms of the Mission. This tool is ideal to prepare for a visit or to see what the site offers from the Comfort of your home.