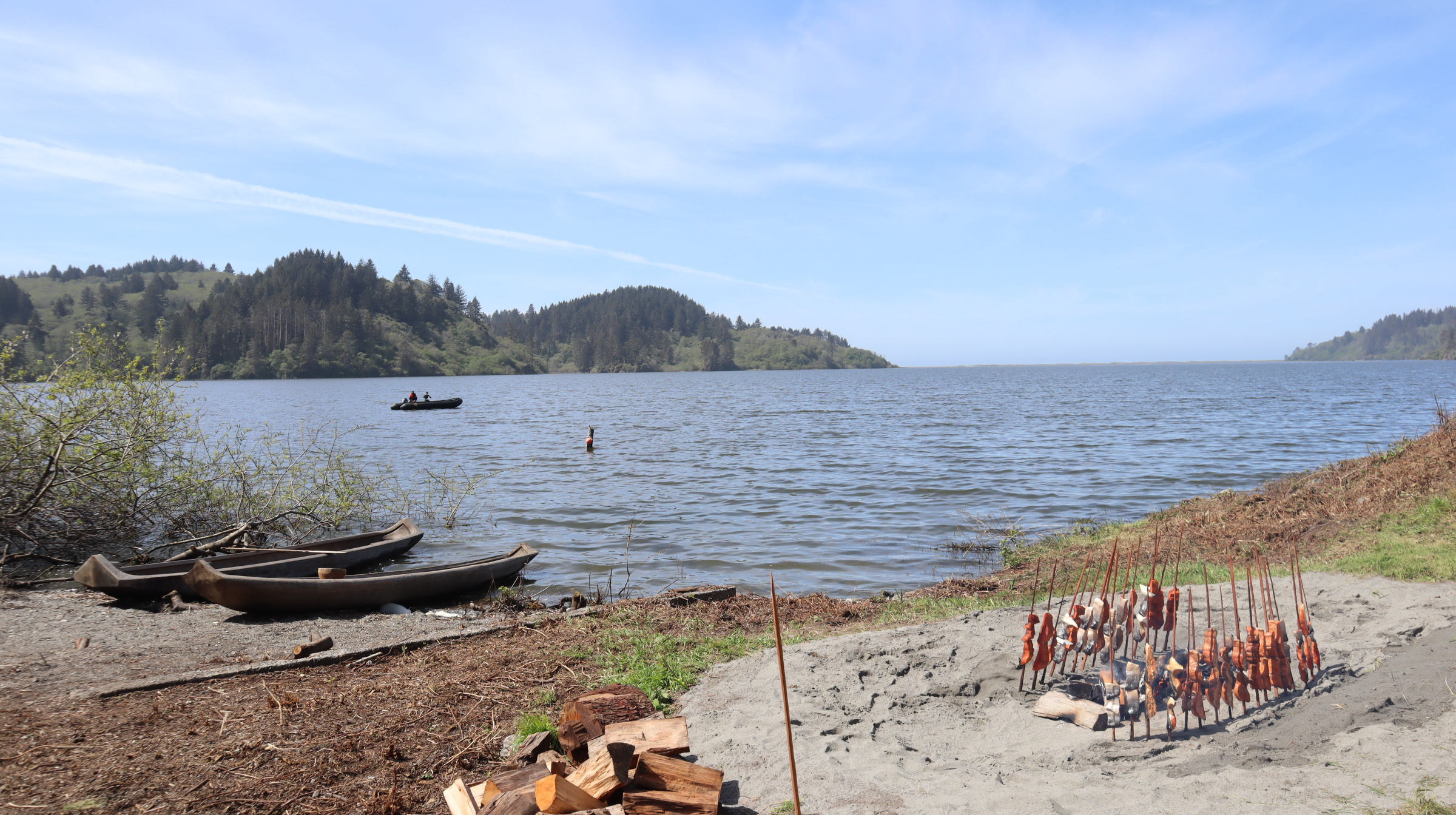 More than 150 tribal and state park officials as well as state and federal congress members and agency representatives traveled up to Yurok Country to attend the special celebration. Broadcasted by Parks California, the livestreamed part of the event featured commentary from the Tribe, California State Parks and Redwood National Park as well as Yurok elders who informed viewers about the Tribe’s unique relationship to the coastal lagoon.

“The restoration of our role as the steward of Chah-pekw O’ Ket’-toh represents a significant step toward the healing of our people,” said Joseph L. James, the Chairman of the Yurok Tribe. “We are extremely proud to be the first tribe in California to operate a visitor center within the state park system. It is humbling to know this precedent sets the stage for many other tribes to follow suit. I would like the thank the North Coast Redwoods State Park for taking the time to build a reciprocal relationship with the Tribe and taking action to correct an historic wrong.”

“I hope public land managers from all over California and the entire US use the partnership between the state park and the tribe as a blueprint to build solid working relationships with sovereign tribal nations in their regions,” added California State Parks North Coast Redwoods Superintendent Victor Bjelajac. “Our partnership on the visitor center, renaming of Sue-meg State Park and condor restoration projects are only the beginning. I know we will embark on many more equally exciting endeavors in the not so distant future.” 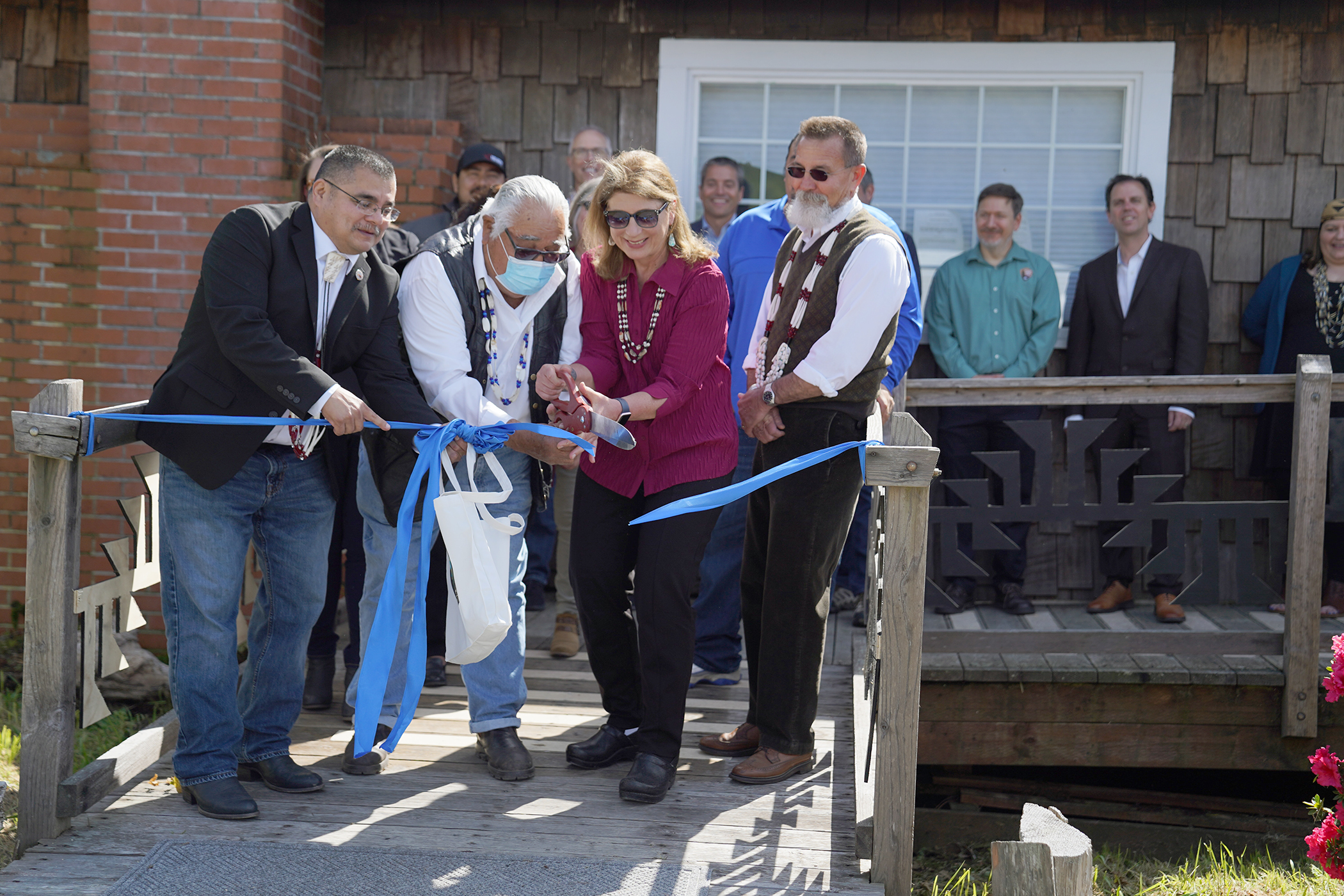 “Visitors have an opportunity to learn about the Tribe from Yurok citizens,” Clayburn said.

For countless generations, Yurok families occupied multiple villages, such as Chah-pekw and Cho-chkwee, near the coastal lagoon. The residents of the villages lived in relative peace until the California Gold Rush, when European settlers attempted a genocide against the Tribe and neighboring indigenous nations. The Tribe endured several devastating atrocities during this tumultuous time period, but the Yurok people were never removed from the region. In fact, many contemporary Yurok citizens are descendants of the Chah-pekw and Cho-kwee villagers who survived the Native American holocaust. One of the descendants, Yurok Tribal Council Member Sherri Provolt, assisted in the formation of the agreement that paved the way for the Tribe to operate the Chah-pekw O’ Ket’-toh Visitor Center.

“It feels really good to regain our rightful place as the primary caretaker of Chah-pekw O’ Ket’-toh,” said Tribal Council Member Provolt. “I know our ancestors would be proud that we are making positive change for future generations of Yurok people and natives throughout the state.”

The Tribe is making progress in other big ways too. The soon-to-be realized reintroduction of the California condor was also be recognized at today’s event. Later this month, the Yurok Tribe and Redwood National Park plan to release the first four condors to take flight in the region since the late 1800s. The Northern California Condor Restoration Program, comprised of biologists and technicians from Tribe and Redwood National Park, will be managing the new flock. A more detailed announcement will be made when the release date is finalized.

Since 2008, the Tribe has been laying the groundwork to reintroduce condors in Yurok Country. With support from Redwood National Park, US Fish and Wildlife Service and the Administration for Native Americans, as well as the Bureau of Indian Affairs, Pacific Gas and Electric and many other contributors, such as the Global Conservation Fund, the Yurok Wildlife Department completed the tremendous amount of work required to reintroduce the critically endangered species. The following tasks represent a small fraction of what they had to accomplish in order to make condor reintroduction a reality: extensive environmental assessments, contaminant analyses, constant fundraising, planning, designing and constructing facilities, performing intensive community outreach and coordinating with numerous stakeholders and collaborators.

In the Yurok worldview, Prey-go-neesh (condor) is one of the most sacred species. The bird is featured prominently in the Tribe’s creation story and performs an essential function in the White Deerskin Dance and Jump Dance.

“The purpose of the Jump Dance and White Deerskin Dance is to bring balance to the world. Our condor restoration work is a representation of this sacred obligation. Through condor reintroduction, we are fixing an imbalance in the natural world and restoring a critical part of our culture,” concluded Chairman James.

As California State Parks’ statutory partner, Parks California’s mission is to help strengthen parks and inspire all to experience these extraordinary places.

The Yurok Tribe is the largest Tribe in California with more than 6,300 members. The Tribe’s ancestral territory comprises 7.5 percent of the California coastline, spanning from the Little River to the south and

Damnation Creek to the north. The eastern boundary is the Klamath River’s confluence with the Trinity River. The Tribe is a leader in natural resource management, fisheries restoration and cultural protection.