A lagoon is a closed but often brackish (salty water mixed with fresh) body of water near the ocean. Humboldt Lagoons, lying between Eureka and the Oregon border, are part of the largest lagoon system in North America. The system has been created by an ongoing clash of continental plates—a “subduction zone,” where the Gorda Plate dives under the North American Plate. Earthquakes are common—most of them small.

Big Lagoon, which frequently breaches its sand spit after winter rains. Thousands of birds live or migrate through here, as does a federally endangered fish, the tidewater goby.

Dry Lagoon, which was once more like a lake. Farmers drained it, but their attempts to grow crops here failed. Dry Lagoon’s wetland now attracts migrating birds.

Freshwater Lagoon, which is co-managed with Redwood National and State Parks. A fully enclosed body of water, Freshwater is stocked with rainbow trout. It also hosts bluegills, catfish, and largemouth bass.

Photographers beware: Bulls can weigh up to 1,200 pounds and aggressively guard their harems, especially during mating season in the fall. Females are wary during calving season in May and June. Respect their habitat and observe safely, from a distance. 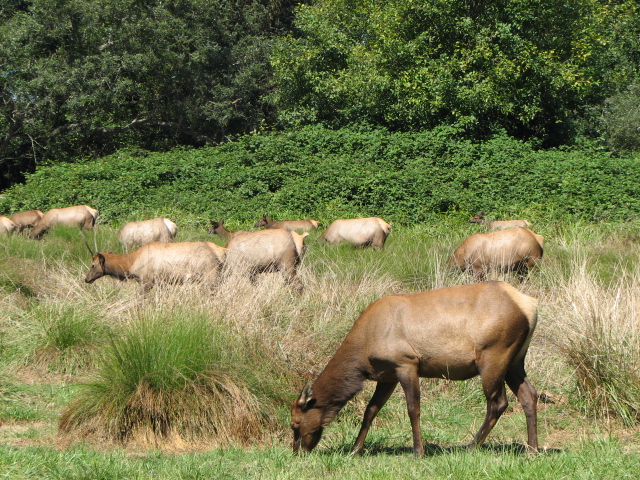 Mollusks
Mollusks here unfortunately include New Zealand mud snails. Like native snails, these pests are occasionally eaten by fish. Unlike natives, Save the Redwoods League reports, http://www.savetheredwoods.org/grant/snail-invasion-could-mean-trouble-for-food-web, New Zealand mud snails can close trap doors in their shells and emerge from the other end of the fish unscathed. They are a dead end in the food web.

Dune mats are communities of low-growing plants that live on the dunes closest to the beach. It’s a hardy group that can tolerate wind, salt spray, poor soil, and dense fog. Native dune mats can be displaced by invasive exotic species such as jubata or pampas grass, ice plant, and European beach grass. State Parks staff has been restoring the dunes here; a vibrant dune mat community has emerged, with species that include beach strawberries, sand verbena, and (non-edible) beach carrots. 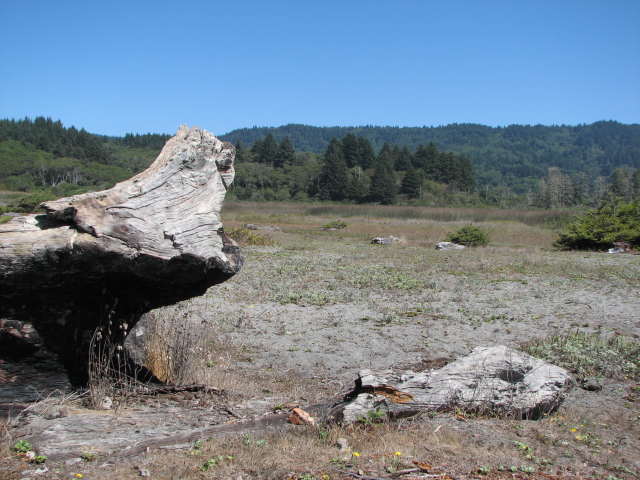 Prairie balds, found across Highway 101 from the Stone Lagoon Visitor Center, are dominated by grasses (including small patches of Pacific reed grass) interspersed with Douglas iris and bracken fern.

In Humboldt Lagoons’ forests, coast redwood and salt-spray-tolerant Sitka spruce thrive near the ocean among western hemlock and grand fir. Red alder and willows grow along streams. In spring, azaleas, calypso orchids, blue pimpernel, and many other flowers bloom. In summer, the forest produces salmonberries, blackberries, thimbleberries, and huckleberries.

Stone Lagoon Visitor Center has more information on the park’s natural and cultural history, as well as on weekend boating options. Sit on a sofa beside a big picture window to take it all in.

To find out more about research in California's redwood parks, go to Save the Redwoods League’s website. http://www.savetheredwoods.org/our-work/study/redwood-research/redwoods-research