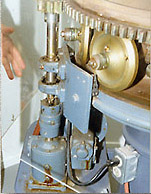 Now we're almost to the top of the light-house. We're standing in the lantern room. It was made back at the Light-house Establishment's general depot in New York and shipped around the Horn for use here. It's made of iron and has a double-door system we used to make sure the inside of the room wasn't directly exposed to the outdoors. This separation of the interior of the lens room from the outside environment helped keep the interior as clean as possible and protect the room from sudden changes in temperature.

"Why was it so important to keep the room clean," you ask. Well, all the glass surfaces had to be absolutely clean so as much light produced by the lamp could pass through the glass as possible. One problem with an open burner system was that if the wicks were not adjusted and trimmed correctly they would produce soot. The soot would deposit on the glass surfaces and reduce the amount of light passing through to the outside. If this had happened, ships wouldn't have been able to see our light as far out to sea as they should have. As a result, some ships may have had a difficult time navigating.

Years ago the original clockwork mechanism, that is, the one I worked with, was removed from Pigeon Point. Today they have this mechanism from a smaller lens in place to give you an idea how we used to turn the lens.

Remember that weight we saw down in the base of the light-house? In my day the cable that was attached to the weight ran all the way up the center of the light-house, around a couple of pulleys, and up through a slot in the floor of the lens room to attach to the drum in the bottom of the clockwork. This one has a similar, but much smaller, drum.

The drum would turn as the cable unwound while the weight dropped into the pit in the foundation of the light-house. As the drum turned it caused gears to turn in the mechanism, including this one on the top. That gear engaged with a gear near the base of the lens and turned the lens around. The mechanism allowed for accurate adjustment of the turning rate of the lens. It was set to turn the lens one complete revolution every four minutes. I'll show you why that was important in a minute.

Every four hours of operation we had to wind the weight back up so it could start the process all over again.

Today this little electric motor does the job of turning the lens when they operate it each year around the anniversary date of the first lighting of the lens. November 15th