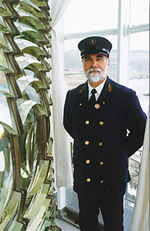 Here we are, at the top of the light-house. This area is called the "Gallery." During the hours of operation, I would normally be in the room below this one. During the day we would be up here preparing for the night's shift. Whenever we came up here we were required by the Lighthouse establishment to put on long-sleeve linen aprons that came below our knees and closed around our necks. We wore these aprons to protect the lens from being scratched or otherwise injured by brass buttons, coarse woolens, or other coarse articles of our clothing that could come in contact with the lens during the operation of cleaning.

All these glass surfaces need to be cleaned every day, inside and out. Again, here is a sample of the Light-house board's instructions to keepers:

After extinguishing the light in the morning, the lens, before the operation of cleaning it is commenced, should be dusted with a feather brush to remove any dust which may have accumulated upon it, and which, if left upon it while it is cleaned with rouge and spirits of wine, will scratch and injure it.

As soon as the lens is thoroughly cleaned the cover should be carefully put on it, and so closed at top and bottom as to exclude all dust which might rise up in cleaning the interior of the lantern.

Let me show you a couple of other items in the gallery that were very important to us in the 19th century. I doubt folks today would even know what they're looking at. 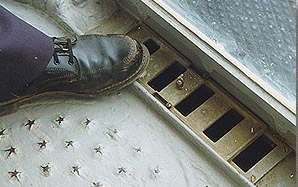 Remember that before 1926, and the introduction of electricity to the lighthouse, we were using illumination systems that depended on burning lard oil or kerosene. It was very important to be sure we were getting the optimum burn from the lamp. Also, keep in mind that in those days there were no doors or windows we could open to the outside from the lens room or the gallery. This was to help keep the lens room clean and protect against sudden changes in temperature. However, we needed a good airflow to the burner for the best light possible.

That's where these louvered vents came in. There are several of them at the base of the glass walls, evenly spaced around the gallery. We would adjust them as the direction and intensity of the wind shifted.

Keeping in mind there were no windows or doors to the outside from the lens room, what do you think this is? I can tell you this much, it's another example of the specialized construction of the lighthouse. 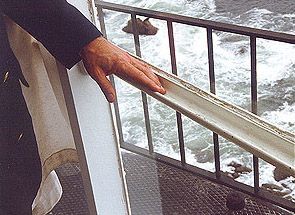 What happens to a window on a cold night when the interior of a room is warmer than the outside? The windows fog up! These cupped areas were used to collect the water as the moisture would run down off the glass. Then we could soak it up with a towel.