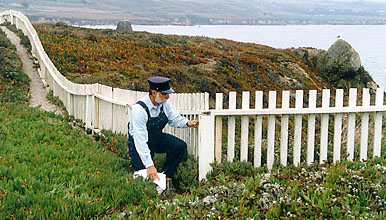 Pigeon Point was first lit in 1872. I worked for the United States Light-house Establishment which was part of the Treasury Department. Earlier in my life I had been to sea for a few years. This background helped me to appreciate the importance of the work light-house keepers performed. As First Assistant Keeper I earned $600* a year, my boss, the Principle Keeper made $1,000 year. According to the Light-house Board, in 1889 it cost $3,842.00 a year just for the maintenance of a first-order light-house like Pigeon Point.

Be able to read, write, and keep accounts

Be able to perform the requisite manual labor

Be able to pull and sail a boat

Have enough mechanical ability to make the necessary minor repairs about the premises and keep them painted, whitewashed, and in order.

After three months of service, you were examined by an inspector, who, if he found that you had the qualities needed at that station, certified that fact to the Light-house Board, which, upon their approval, you were fully appointed to the position by the Treasury Department. Young men who had seen some sea service were preferred as assistants at the larger stations. Retired sea captains or mates with families were frequently selected for stations requiring a single keeper.

The Light-house establishment provided us with detailed instructions on every aspect of our duties. For example, here is the "recipe" for making whitewash:

Slake half a bushel of unslaked lime with boiling water, keeping it covered during the process. Strain it and add a peck of salt, dissolved in warm water; three pounds of ground rice put in boiling water, and boiled to a thin paste; half a pound of powered Spanish whiting, and a pound of clear glue, dissolved in warm water; mix these well together, and let the mixture stand for several days. Keep the wash thus prepared in a kettle of portable furnace, and when used put it on as hot as possible, with painter' or whitewash brushes.

The Uniform
On May 1, 1884 the Light House Board placed the following uniform regulation into effect:
The uniform for male keepers and assistant keepers of light-stations, and the masters, mates, engineers, and assistant engineers of light vessels and tenders, will consist of coat, vest, trousers, and a cap or helmet. The coat will be a double-breasted sack, with five large regulation buttons on each side--the top buttons placed close to the collar, and the lower ones about 6 inches from the bottom, and the others at equal spaces between the top and lower buttons. ... the above will be made of suitable dark indigo-blue kersey or flannel. The cap will be made of dark-blue cloth, with a cloth-covered visor and an adjustable chin-strap of cloth held by yellow-metal regulation buttons. A yellow-metal light-house badge will be worn in the middle of the front of the cap.

The Light House Board gave us our first uniform when we were hired. After that were were on our own to replace uniform clothing as it wore out.

The Board considered it the duty of every light-keeper to stand by his light as long as the light-house stands, and that for him to desert it when in danger was as cowardly as a soldier to leave his guns on the advance of an enemy. As keepers we were trained to consider the care of the light and the light-house property our paramount duty, beyond any personal consideration. The esprit du corps in the light house service was such that instances happened when the keepers on duty died at their post. Other keepers, in times of great danger to the light-house and all around, have saved their lens, letting their family shift for themselves!

It was everyone's job to keep the structures and equipment in good working order. We always had to be ready for a surprise inspection by the District Inspector. District Inspectors were officers in the U.S. Navy. They were required to inspect every lightstation, light ship, tender, etc. in their district every quarter and report on their findings to the Light House Board. Our inspector was based in the Light-house Establishment's 12th District office in San Francisco. Every so often, he would just "stop by."

*Author's note: Facts, figures, and procedures cited in the Virtual Tower Tour are based on the following light-house service documents kindly made available by Frank Perry, author of The History of Pigeon Point Lighthouse.

Instructions and Directions to Guide Light-House Keepers and Others Belonging to the Light-House Establishment, issued January 1, 1870, Fifth Edition.