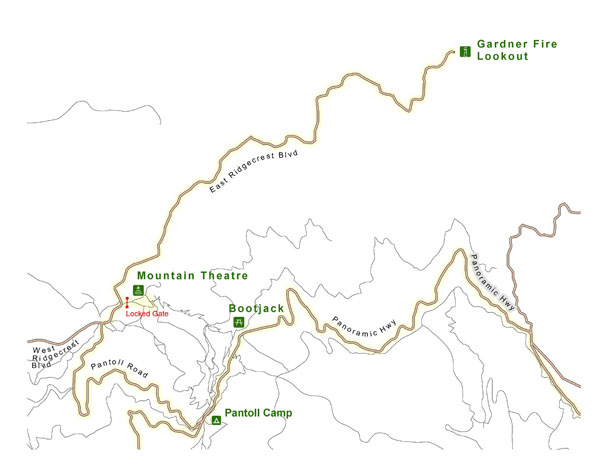 A mountainside natural grassy bowl, surrounded by oak trees, with a spectacular view of the San Francisco Bay and the East Bay hills beyond: this has been the setting for the annual Mountain Play since 1913. What could be a better location for an outdoor performance? Between 1934 and 1937 it was made better—thanks to the hard work of the war veterans of CCC Company 1920V.

Other CCC structures at Mount Tamalpais include a picnic area, campground and fire lookout.

Bootjack Picnic Area
From the road, you can see stone steps and a wall, and some of the tables and stoves in the picnic area up the hill. The best feature of this area is the 6-way stove in the center of the picnic area. To see it, you will need to park and either walk up the stairs, or access the picnic area via the accessible trail. 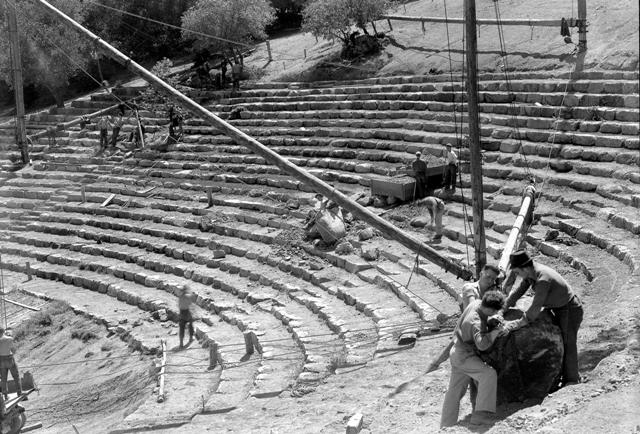 Mountain Theater
The Mountain Theater, now officially called the Cushing Memorial Theater, is about a 1/3 mile walk on a paved gentle path from the parking lot. Note the stone monument to the Civilian Conservation Corps at the point where the theater access road and path split.

The massive stone amphitheater, which seats around 5000, still looks very much as it did when it was built. The rocks used to construct the theater weigh several tons each. All were moved in place using ropes, levers, hoists, cables, and manpower. These were not teenagers doing the work: the men would have been in their mid-thirties to mid-forties.

Other CCC structures in the area include the original men’s and women’s restrooms, no longer used (the stone buildings on a side road you may have noticed as you approached the theater), and the curved building that now houses restrooms. The “new” restroom building was originally the performers’ dressing room.

Gardner Fire Lookout
Keep your eyes open to spot the Gardner fire lookout as you approach East Peak.  Its native stone at first glance blends with the rock of the peak. Use of local materials was a major feature of the “park rustic” style of many CCC projects. You will have an excellent view of the tower from the parking lot at the base of the peak. The park Visitor Center and a wheelchair-accessible picnic area are also located by East Peak.

The 1920th built this tower between 1935 and 1936. It is still an active Marin County Fire Department lookout. As you view the sturdy stone, wood and steel tower perched on the peak, imagine hauling all the materials up either by cable or by hand. That is how the veterans of the 1920th did it. They also built a water system, including the rock pressure pump house that you can see below the peak, and ran electricity and phone lines. According to  Marin County Fire Department history, “. . . equipped with electricity, hot and cold running water, and telephone, this lookout was acclaimed ‘The Deluxe Lookout Station of California’”.

Want to Go Farther?
Not far away at all, you can see more work by the Mount Tamalpais CCC companies at Muir Woods National Monument. The main entrance is also off of Panoramic Highway, between Mount Tamalpais and Highway 1. 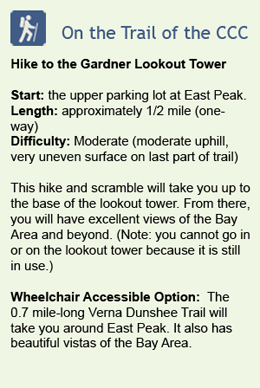