On Friday, May 17, 2013, the State Park and Recreation Commission unanimously approved the General Plan for Big Basin Redwoods SP. The Commission also approved an amendment to the West Waddell Creek State Wilderness adding 390 acres to the state wilderness located in Big Basin. 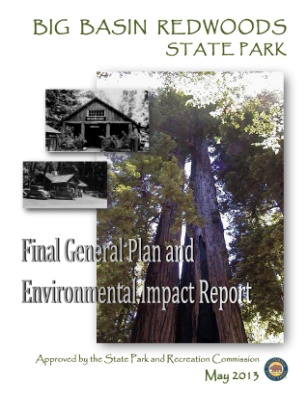 The Final General Plan document includes an Addendum to the Final EIR that introduces a January 2014 Settlement Agreement that stipulates specific actions to be taken by State Parks to further efforts to protect the marbled murrelet.

You can view or download the General Plan/FEIR text and maps from the following links listed below:
Final General Plan / EIR
Final EIR/ Response to Comments

On June 18, 2012, the California State Parks released to the general public and public agencies the Preliminary General Plan / Draft Environmental Impact Report for Big Basin Redwoods State Park.  The general plan will guide future management direction at the park.  It contains a comprehensive and integrated set of parkwide goals and guidelines for the long-term management of the park that focus on protection of environmental resources, enhancements to visitor use and opportunities, and improvements to administration and operations of the park.  IN addition, the general plan includes proposed park development and designates appropriate land uses.

The Draft Environmental Impact Report (EIR) that is included in the Preliminary General Plan contains the environmental analysis of potentially significant effects of the proposed project.  Together, the Draft EIR and the Department's Response to Comments (RTC) constitute the Final Environmental Impact Report for the project.  The focus of the RTC is on the disposition of environmental issues that have been raised in the comments, as specified by CEQA Guidelines Section 15088(b), but also includes responses related to planning considerations of the Preliminary General Plan.

The Big Basin Redwoods State Park General Plan was developed as part of a regional planning effort, along with the recently completed general plans for Butano State Park and Año Nuevo State Park. These parks share many natural and cultural characteristics, and have similar visitor demographics. Each one also has its own outstanding features and visitor opportunities. This planning process recognized the potential for regional collaboration between these and other nearby public lands in resource protection, recreation, interpretation, and park management.

Three public workshops were held during the early planning stages. Participants learned about the planning process, reviewed the resource data, and provided input on issues, concerns, and recommendations for the park’s future. Using this input, the planning team has been developing alternative concepts and preliminary plan guidelines for public review.

Notices and Newsletters were sent out to announce meetings and report on planning progress:


PUBLIC PARTICIPATION in the PLANNING PROCESS

A General Plan workshop was held on March 26, 2011 at the Felton Community Hall. The planning team provided details on the long range goals and preliminary planning proposals (Preferred Alternative) and received public comments and suggestions for the future of Big Basin Redwoods State Park. This meeting was attended by 75+ people who endured the wet weather and challenging road conditions for this opportunity to review the materials and talk with the rangers and planning staff. A number of letters and emails were also received expressing their support and/or concerns for future protection of old growth redwoods and opportunities for improved facilities and expanded use. A summary of public comments is available for review by clicking here.

A General Plan Public Meeting in an open house atmosphere was held on February 4 and February 6, 2010. The public commented on the Alternatives presented for the future of Big Basin Redwoods State Park. The planning possibilities for the future of Big Basin as presented in the three alternative plans received mixed reviews. The two public meetings were well attended and the feedback that we received expressed continued interests for park access and trails to support equestrians, bicyclists, hikers; also with concerns by individuals, neighbors and representatives from various organizations for the protection of redwood forests, wilderness areas, historic buildings, and long-term management of and stewardship of park resources.   A summary of public comments is available for review.


SURVEYS
A survey was taken shortly before the Feb. 4 and Feb. 6, 2010 public meetings from a select audience who had camped at Big Basin Redwoods SP in 2009. Campers were primarily from outside the region, but not for all responders. This information assisted the General Planning Team to understand what activities campers like to do or expect to do at Big Basin. As of March 17, of the 6578 people who were sent the survey by e-mail, 1831 completed it (almost 28 percent - a high return). Since this survey was sent to campers, as expected, the activity that most respondents wanted to do was "camping" (96 percent), followed by "hiking" (83 percent), "relaxing in the outdoors" (75 percent), and "walking for pleasure" (62 percent). See the complete survey results.

Many of our documents are Adobe Portable Document Format (PDF) files and require the Adobe Reader, free software that lets you view and print these files. Take this link to the Adobe website to download the AdobeReader