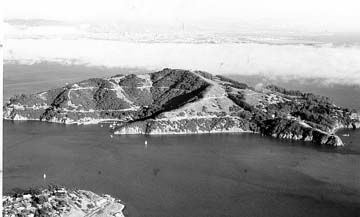 In August 1775, Lt. Juan Manuel de Ayala brought his sailing ship, the San Carlos, into San Francisco Bay, and anchored in what is now Ayala Cove. His mission was to develop an accurate description of the bay that future Spanish ship captains could rely on.

Ayala's pilot, Don Jose de Canizares, explored the bay in the ship's launch, and did the necessary map work - the first maps ever made of the magnificent and now world-famous harbor. The San Carlos remained at anchor beside the island that Ayala christened Isla de Los Angeles. This name followed a practice then common among Catholic explorers of naming sites for the religious feast days nearest to the time of discovery.

In the early years of the nineteenth century, the island was probably uninhabited. The Indians had all been drawn into Mission San Francisco de Asis (Mission Dolores in San Francisco), or driven out of the region. After 1808, though, Russian sea otter hunting expeditions visited the island, establishing a storehouse there. In 1814, the British 16-gun sloop-of-war, the HMS Racoon, was damaged off the coast of Northern California, but managed to stay afloat long enough to reach San Francisco Bay. In March and April of that year, the ship was repaired on the beach at Ayala Cove. Today, the deep-water channel between Tiburon and Angel Island is named Raccoon Strait, in honor of the old British sailing ship.

In 1837, Antonio Maria Osio asked the governor of California to give Angel Island to him for use as a cattle ranch. In his capacity as military commandant of Alta California, General Vallejo endorsed the petition with the proviso that some of the island be reserved for harbor defense. The governor approved Osio's grant in 1839, and thereafter he kept cattle - up to 50 of them - on the island. He had several houses built for use by his herders and other attendants, although he himself never lived on the island.