US Army on the Island

With concern mounting over threats to the Bay Area from Confederate sympathizers and naval forces, the federal government established Camp Reynolds (West Garrison) on Angel Island in 1863. Artillery batteries were built near the camp and at Points Stuart, Knox, and Blunt. After the Civil War, Camp Reynolds became an infantry camp, serving as a depot for recruits, and as a staging area for troops serving in campaigns against the Apache, Sioux, Modoc, and other Indian tribes. In 1886, a report critical of Pacific Coast harbor defenses led to development of new gun batteries on the southwest side of the island facing the Golden Gate. Batteries Ledyard, Wallace, and Drew (the remains of which are visible today) were in operation by 1904, but decommissioned as obsolete just five years later.

U.S. Army presence on the island increased significantly in 1899, when a quarantine station was built at Fort McDowell on the eastern end of the island. This new facility made it possible to isolate troops who had been exposed to contagious diseases while serving overseas in the Spanish-American War and the Philippine Insurrection. 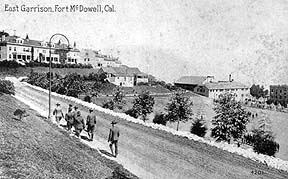 The new facility at Fort McDowell grew quickly from a quarantine station to a discharge depot, and by 1905, some 87,000 men had passed through, on their way to and from the Pacific.

In 1910 and 1911, Fort McDowell was expand into a major facility for receiving recruits and processing military personnel for overseas assignment. Construction included a huge 600 man barracks, a mess hall, and a hospital. During the next few years, this new construction made Fort McDowell the world's largest and most elaborate military induction center.

In 1917, following the U.S. declaration of war on Germany, the facilities at Fort McDowell were put to heavy use. Even the area next to the Immigration Station North Garrison was pressed into service as a prison for "enemy aliens" (most of them German citizens), who had been arrested on board ships in West Coast harbors. These men were later transferred to permanent detention quarter in North Carolina. 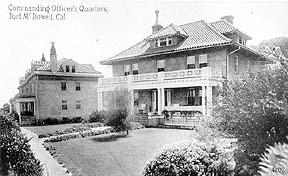 In 1918, Angel Island was used as a debarkation and discharge point for troops returning from the war. Thereafter, through the 1920s and 1930s, busy Fort McDowell inducted and discharged, handling the transfer of about 40,000 men per year --- more than were processed by any other U.S. military post during those years. The reason for much of this activity was that from 1900 to 1941, the only U. S. military bases outside the continental United States were in the Pacific (the Philippines, Hawaii, the Panama Canal Zone, etc.) and Fort McDowell was the nation's only military overseas processing station. Because of this overseas orientation, the ordinary, routine military life of the fort acquired a unique and distinctly international atmosphere.

After the bombing of Pearl Harbor on December 7, 1941 and the outbreak of World War II, the abandoned Immigration Station was turned into a prisoner of war processing facility. Before the war was over hundreds of Japanese, German, and Italian prisoners were temporarily detained here. At the same time, Fort McDowell itself served as a major point of embarkation for troops headed toward the Pacific war zone.

As troops began to return home, a 60-foot-high illuminated "Welcome Home, Well Done" sign was erected on the south-facing slope of the island. The rush continued into 1946, and then tapered off rapidly, so that in July of that year, the army decided to close down Fort McDowell, and declare the entire island surplus property.