Creation of the Park 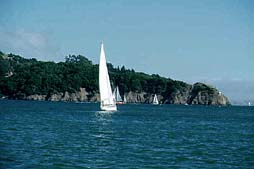 The movement to make the island into a public park got underway in 1947 and 1948, after the federal government declared it surplus property. A thorough study of the island's historical background was carried out by the National Park Service, and in 1954, after various delays, a number of citizens' groups managed to persuade the State Park Commission to acquire about 37 acres surrounding Ayala Cove. Meanwhile, the US Army had selected the island as a site for a Nike missile launching facility and radar control station. Despite this partial re-occupation of the island by the army, additional acreage above the cove was acquired by the State in 1958, and the mountain top itself was re-christened Mount Caroline Livermore, in honor of the dedicated Marin County conservationist who led the campaign to create Angel Island State Park.

In 1962 the Nike missile base on the south side of the island was deactivated, and the army once again left the island. In December of that year, the entire island was turned over to the State of California for park purposes -- with the single exception of the unmanned Coast Guard station on Point Blunt, which continue in active operation to this day.