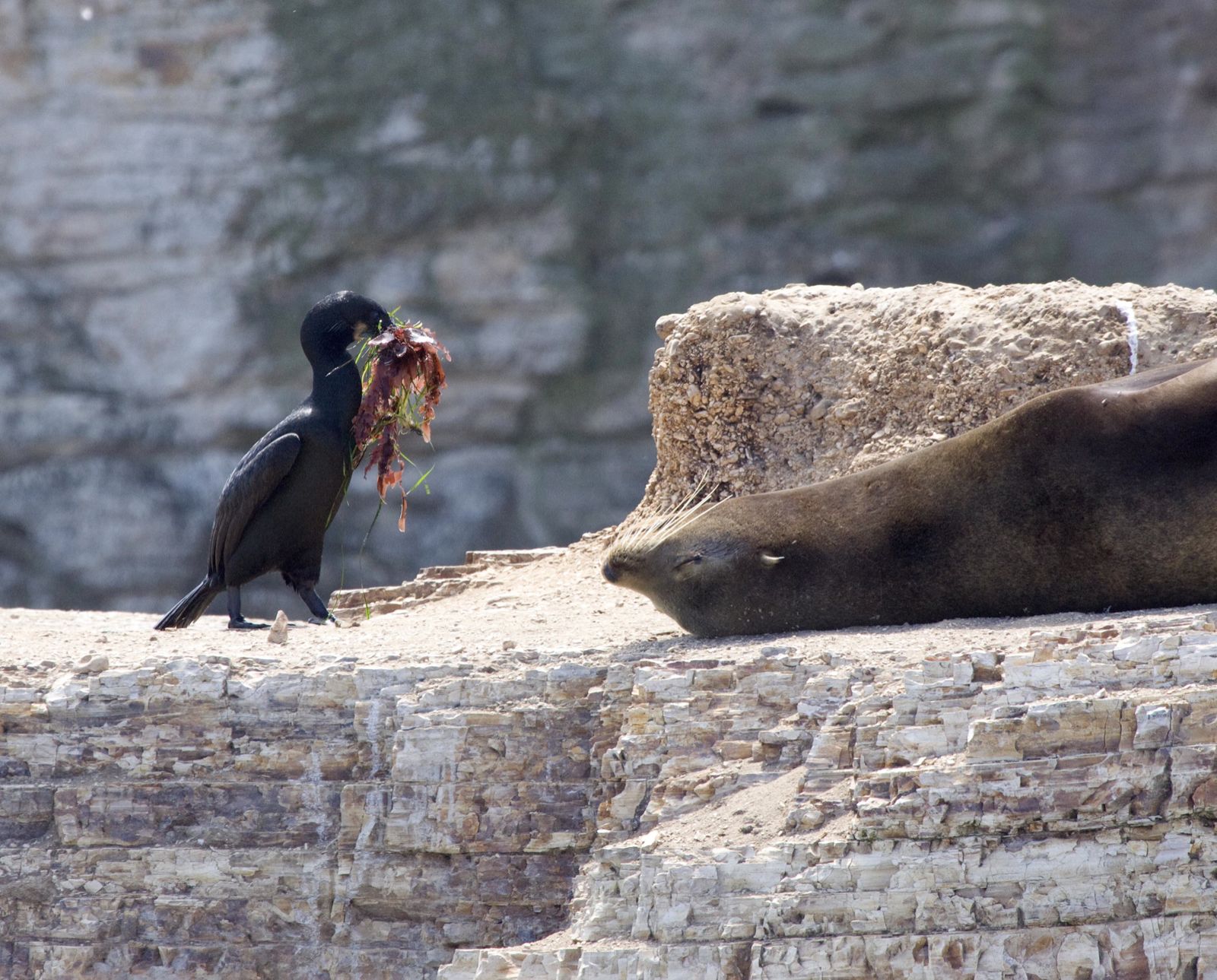 Coastal Año Nuevo SP supports a notably high diversity of avian life. The sandy beach and tidepool habitats along the coast provide important feeding and resting areas for multiple species of shorebirds and gulls. During winter and migration, western whimbrils, western sandpipers, willets, and rare long-billed curlews are just a few of the shorebirds that feed on the invertebrates living in the sand along the beach. At least seven species of gulls migrate through the area in spring, some of them resting and feeding on the beach. The coastal scrub blanketing the coastal bluffs is home to resident species such as the wrentit, song sparrow and California towhee. Annual grasslands provide valuable hunting grounds for raptors such as American kestrels, red-tailed hawks, and American peregrine falcons. Waterbirds such as mallards, cinnamon teals, and California brown pelicans can be seen on the freshwater ponds. Great horned owls and barn owls are two of the more common of seven species of owls that have been recorded breeding in the coastal area of the park.

The coastline of Año Nuevo SP is home to a number of listed bird species. California brown pelicans feed in the coastal waters, and can be seen bathing in the freshwater ponds in the park. Bank swallows, a state threatened species, nest along the sandy cliffs of Año Nuevo Point, and can be seen in spring and summer flying low over the dunes and ponds. The state threatened American peregrine falcon hunts along the coast, and can be seen diving over coastal scrub in fast pursuit of prey. Federally threatened western snowy plovers have been documented breeding on Año Nuevo Beach in the past, and winter on the beaches as well. The rhinoceros auklets that nest on Año Nuevo Island are a California Species of Special Concern. These seabirds nest in both natural burrows and artificial burrows installed by researchers to restore and enhance the population.

The Douglas-fir and redwood forests of Año Nuevo SP are home to birds such as the Steller’s jay, brown creeper and Pacific wren, a tiny bird with a bursting, musical song that echoes through the forest. Along the streams of the park, migrants such as Wilson’s warblers, Swainson’s thrushes, and black-headed grosbeaks nest in the montane riparian habitat. In the more open coastal scrub and grasslands of the park, a number of species are present, including wrentits, white-crowned sparrows, and Bewick’s wrens. Annual grasslands provide good hunting grounds for numerous species of raptors, including red-tailed hawks.

A number of sensitive bird species occur in Año Nuevo SP. The combination of open and forested habitats makes for prime raptor hunting and nesting habitat. Species such as the northern harrier, white-tailed kite, and Cooper’s hawk can all be found in Año Nuevo SP. Northern harriers and white-tailed kites can be seen hunting over the open grasslands, and Cooper’s hawks hunt small birds and mammals in the coastal oak woodland and montane riparian habitats. Although Año Nuevo SP does not contain old growth redwood nesting habitat for the marbled murrelet, it is likely that this endangered seabird uses corridors through the park to reach nesting areas further inland. Purple martins, a California Species of Special Concern that nests in cavities, are present in the park. Other bird Species of Special Concern that may be seen in Año Nuevo SP include Vaux’s swift, loggerhead shrike, and yellow warbler.

Of particular concern is the federally threatened and state endangered marbled murrelet. It has been listed because of population declines throughout its range in California, Oregon, and Washington,  primarily due to habitat loss. Current major threats include logging or modification of habitat, oil spills and predation of eggs by Steller’s jays and common ravens. Egg predation is particularly evident in the Santa Cruz Mountains population. Marbled murrelet surveys in the Santa Cruz Mountains have shown a drastic reduction in detections of murrelets in the past 10 years. At Big Basin Redwoods SP the average number of detections has gone from 55 in 1995 to less than five in 2005. The numbers from other nearby parks also show a similar decline.