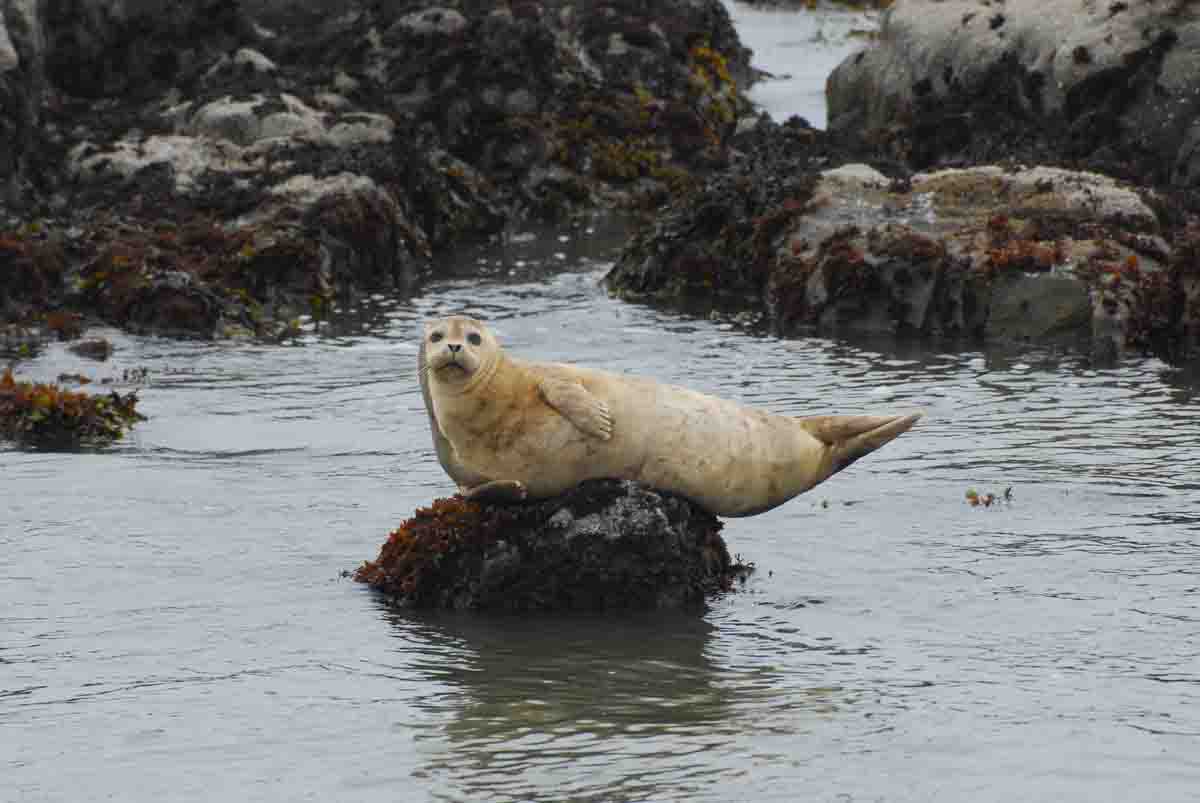 The moderate climate of California's central coast region helps make intertidal life at Ano Nuevo among the most luxuriant in the world. Air and sea temperatures vary far less from winter to summer than is true in other parts of the world. As a result of this and other factors, tide pools along the rocky shoreline teem with life. More than 300 species of invertebrates have been recorded at Año Nuevo, including an unusual number of rare species. Common life forms include clams, abalone, limpets, chitons, hermit crabs and flower-like anemones. Tiny worms build huge honeycomb homes on shallow rocky ledges. Nutrients from seal and sea lion wastes seem to fertilize the lush aquatic plant growth, so that rockfish and bottom fish abound in offshore waters.

Año Nuevo Island and the adjacent mainland beaches make up one of the most important pinniped rookery and resting areas in central and northern California. (Pinnipeds are animals with finlike feet or flippers.) Northern elephant seals are the largest, and, in many ways, the most impressive of these animals. Harbor seals are much smaller and quite wary and elusive. Two kinds of sea lions are also present: Steller and California. The tawny brown or yellowish Steller sea lions, which mate on the rocks around the island from mid August, are most often seen on the rocky outer portions of the island.

California sea lions (Zalophus Californianus) are present at Año Nuevo Island throughout the year, though their density varies by season--highest during the summer breeding season and lowest during the winter months.  Prior to ~2010, Año Nuevo Island was largely a haulout location where the sea lions would rest for a day or two as they migrate up and down the coast.  While this is still true, Año Nuevo Island is now a breeding colony.  Throughout the 2010s, the number of California sea lion births increased rapidly and appears to have stabilized between 800 and 1000 births per year.  The sea lion breeding season runs from May through August and this is the period when we typically see the highest density of animals (up to ~13,000 at one time!). The characteristic bark of the males is both loud and incessant and can be heard for miles. By contrast, the forlorn, almost human wail of a female who has lost her pup stands out in sharp relief from the cacophony of the males. Harbor seals live on the island all year and breed there in April and May. They can often be seen bobbing in the surf just off the reserve's beaches, with only their heads out of the water. They can also be seen occasionally on offshore rocks where the mottled pattern of their coats is apparent.

Visitors may occasionally spot sea otters offshore, diving for food or floating on their backs. Like the elephant seal, this animal is returning from near-extinction to reoccupy its former range. Sea otter mothers and pups returned to Año Nuevo in the early 1980s, the first sea otters to enter this immediate area in more than a century.

Throughout the spring months, the telltale 10 to 15 foot spouts of the California gray whale are sometimes visible as they pass the Año Nuevo Point during their annual migration between their breeding grounds off Baja California and their feedings in the Bering Sea.