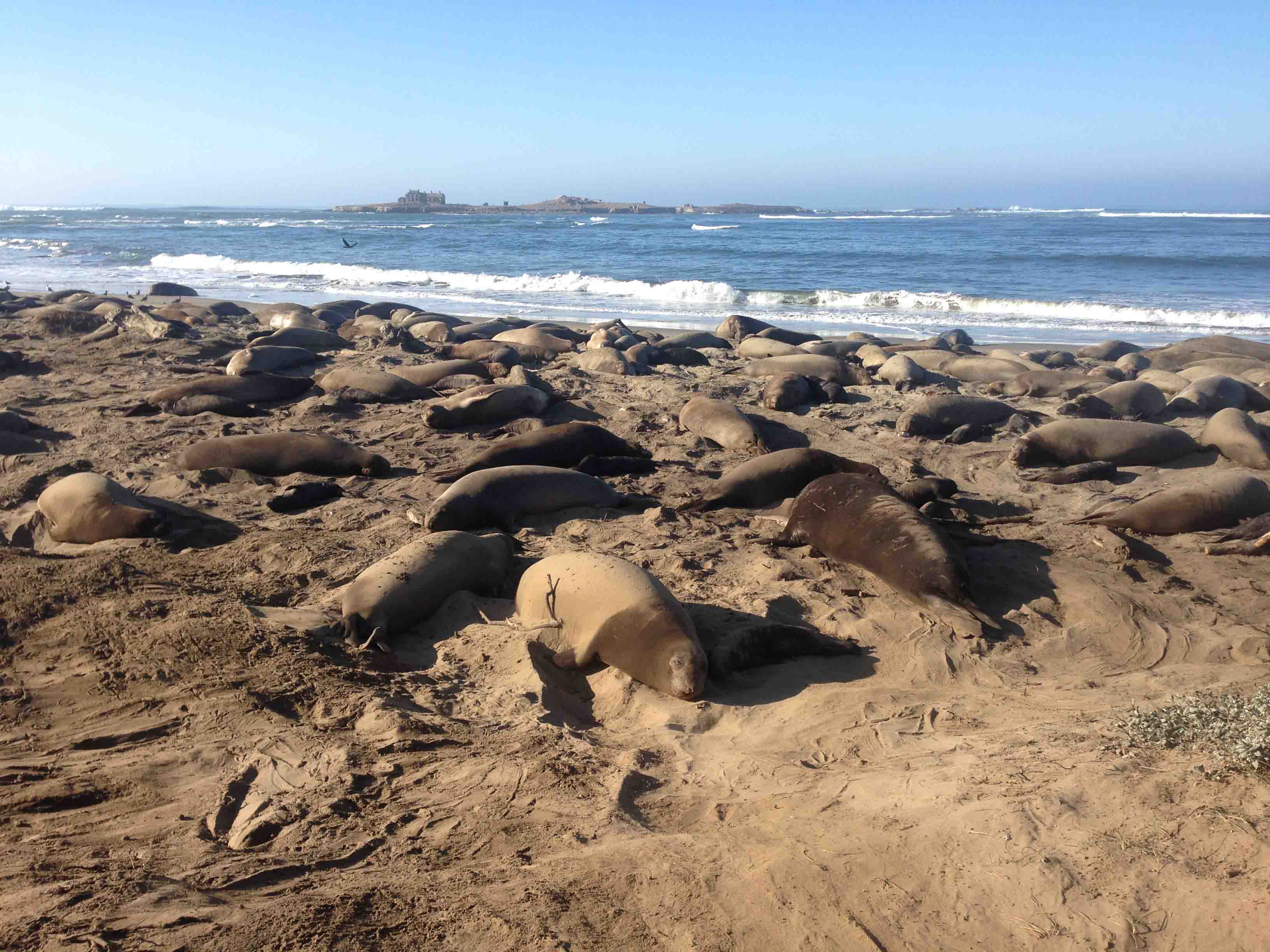 Perhaps the most compelling attraction for human visitors to Año Nuevo State Reserve is the large colony of northern elephant seals that assembles here each winter. Their name is reflective of their large size and the long pendulous noses on the males. These large animals spend most of their lives at sea, coming ashore only to molt, give birth, and mate.

History
Hundreds of thousands of northern elephant seals once inhabited the Pacific Ocean. They were slaughtered wholesale in the 1800s for the oil that could be rendered from their blubber. By 1892, only 50 to 100 individuals were left. The only remaining colony was on the Guadalupe Island off the coast of Baja California.

In 1922, the Mexican government gave protected status to elephant seals, and the U. S. government followed suit a few years later when the seals began to appear in Southern California waters. Since that time, elephant seals have continued to multiply exponentially, and they have extended their breeding range as far north as Point Reyes. Today, there are approximately 200,000 northern elephant seals.

Breeding Season
The elephant seal breeding season begins at Año Nuevo in December, when the first males arrive. From fourteen to sixteen feet long and weighing up to 2 1/2 tons, these huge bulls engage in violent battles to establish dominance. The successful bulls do much of the breeding, with most of the duty falling on the "alpha" bull at the top of the social ladder.

Birth
In late December, the females begin to arrive and form "harems" on the beaches of the Reserve. Much smaller than the males, they average ten to twelve feet in length and weigh 1,200 to 2,000 pounds. Three to six days after she arrives, the female gives birth to the pup that was conceived the previous year. Normally only one pup is born to each female, and she nurses for 25 to 28 days.

Nursing
Ordinarily, a mother nurses her own pup, although if they are separated another female may adopt the youngster. Feeding on its mother's rich milk (55% fat), the pup grows from approximately 75 pounds at birth to 250-350 pounds in less than a month. Some resourceful pups nurse from two or three females. They can weigh 600 pounds and are aptly called "super weaners."

Mating and Gestation
Females come into season and mate about 24 days after giving birth. However, the fertilized egg does not implant in the wall of her uterus for about four months--a rare phenomenon called "delayed implantation." The theory is that the female is so weak after nursing and fasting that she doesn't have enough energy to nourish the egg. Since the seals' gestation period is seven months, this delay means that the young will be born after the female reaches her breeding ground the following year. The pups could not survive if born at sea. Adult females may mate several times before returning to the ocean, abruptly weaning their pups by desertion. By mid-March, most of the adult seals are gone, leaving the pups behind.

Weaners
When the weaned pups are four to six weeks old, their original coat of black fur molts and is replaced by a shiny new silver coat. Soon afterward, they begin learning to swim in the shallow offshore waters or in ponds formed by rainwater. They are very curious and rather awkward and somewhat afraid of the water at first. But they learn quickly, spend more and more time swimming about, and then, during the last three weeks of April, they go to sea one by one and disperse northwestward. They feed off the coast of northern Washington and Vancouver Island in British Columbia and do not appear on land again until September.

Molting
Pinnipeds, like other mammals, must replace old skin and hair. Most animals shed hairs year-round, but elephant seals do it all at once. The molting process is so abrupt in the elephant seal that it is called a catastrophic molt. During the spring and summer months, elephant seals return to Año Nuevo for their annual molts.

Feeding
At sea, elephant seals typically dive 20 minutes to a depth of 1,000 to 2,000 feet in search of food: rays, skates, rat fish, squid, and small sharks. The maximum recorded depth is 5,692 feet. The females eat nothing while they are giving birth, nursing, and mating, and the males go without food for up to three months at that time. They are preyed upon by killer whales and sharks.