Yes
Dogs allowed on paved road and in campground. Dogs not allowed on trails.

Fourteen-mile Malibu Creek is the principal watercourse of the Santa Monica Mountains that ends at Malibu Lagoon. . There are 15 miles of streamside trail through oak and sycamore woodlands on chaparral-covered slopes. Following the trail along Malibu Creek, the visitor will be treated to spectacular vistas, including volcanic rock gorges, scenic pools, and breathtaking views of the Las Virgenes Valley and Malibu Canyon.

Culturally, this area was the center of Chumash Native American life for centuries.  One of the park's most significant points of interest is the Sepulveda Adobe, which was constructed in 1863 on what had been part of an early Spanish land grant.  This historic structure was restored in 2003, but unfortunately was destroyed in the 2018 Woolsey fire. In the early 1900's another adobe was built along Malibu Creek by Johnny Mott, a famous LA attorney.  With only the dramatic stone fireplace left standing, it is known today as the Mott Adobe ruins.  Perhaps the most prominent frequent guest at the Mott Adobe was President Herbert Hoover.

Previous to being opened to the public in 1976, the park was used extensively to film numerous movies and TV shows, such as Planet of the Apes and M*A*S*H.  Most of the park’s land holdings were acquired from 20th Century Fox, which purchased the former Crags Country Club for on-location film and television filming. The original Planet of the Apes movie and the beloved M*A*S*H TV show were among dozens or perhaps hundreds of productions filmed here continuing to this day.

Showers: The park's showers are token-operated. The token machines accept ONLY one dollar bills. Change for larger bills is not available at this time.

Firewood policy: Firewood is allowed to be burned in a fire rings in the campground on LOW (Green) level Fire Safety Day(s). Burning firelogs (ex: Duraflame log) and charcoal briquettes in the fire rings is allowed when fire level is at Medium (Yellow) and weather permits. On a HIGH (Red) level wood, firelogs, or briquettes are NOT allowed to be burned. Check the sign near the campground entrance to see the day's fire level. 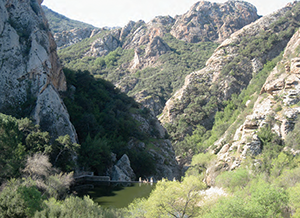 (Photograph by Pam Irvine)
Malibu Creek State Park
Malibu Creek State Park contains excellent exposures of the Conejo Volcanics that cover large portions of the modern Santa Monica Mountains of the Transverse Ranges geomorphic province. The Conjeo Volcanics are one of several Miocene volcanic fields along the California coast that erupted in response to a major reorientation of the tectonic plate boundary between the North American tectonic plate, the subducting Monterey microplate, and the better-known Farallon Plate. The reorientation caused local areas of extension and crustal thinning. The molten rocks below the thin oceanic crust ascended through the crust along fractures to the surface and erupted as volcanic rocks.

Dogs on a leash are allowed in the park's day use areas and campground. Dogs are not allowed on the backcountry trails or dirt roads.