Sunrise to Sunset year 'round.

The park is northeast of Redding, 6 miles north of Highway 299 on Highway 89 near Burney.

Visitors will be able to reserve campsites and lodging six months in advance from the current date. Bookings may extend from the arrival date to the desired departure date – based on availability and the park’s maximum stay rules.
Campsites are typically available on a first come, first served basis between Labor Day and mid-May annually. The cabins are closed during winter.

Visitors,
McArthur Burney Falls State Park experiences very high visitation beginning in April and continuing through October.  On holidays and all summer weekends, the park will fill to capacity and the entrance will be closed.  Please note that if you park along Highway 89 outside of the park, your vehicle may be subject to citation and tow.  If you arrive to find the entrance closed, please return at a later time, typically after 4:00pm.  Plan your visit accordingly.
McArthur Burney Falls Memorial State Park entrance kiosk only accepts cash payment between Mid-September and Mid-May.  Please bring small bills to pay-by-envelope at the entrance kiosk.

The park is within the Cascade Range and Modoc Plateau natural region, with forest and five miles of streamside and lake shoreline, including a portion of Lake Britton.

The park's centerpiece is the 129-foot Burney Falls, which is not the highest or largest waterfall in the state, but possibly the most beautiful. Additional water comes from springs, joining to create a mist-filled basin. Burney Creek originates from the park's underground springs and flows to Lake Britton, getting larger along the way to the majestic falls.

The park's landscape was created by volcanic activity as well as erosion from weather and streams. This volcanic region is surrounded by mountain peaks and is covered by black volcanic rock, or basalt. Created over a million years ago, the layered, porous basalt retains rainwater and snow melt, which forms a large underground reservoir.

Within the park, the water emerges as springs at and above Burney Falls, where it flows at 100 million gallons every day.

Burney Falls was named after pioneer settler Samuel Burney who lived in the area in the 1850s. The McArthurs were pioneer settlers who arrived in the late 1800s. Descendants were responsible for saving the waterfall and nearby land from development. They bought the property and gave it to the state as a gift in the 1920s.

On the Sunday of Columbus Day weekend, the park hosts Heritage Day, featuring demonstrations and recreations of activities and crafts common to people during the late 19th century.

The park is northeast of Redding, six miles north of Highway 299 on Highway 89 near Burney.

Summer and spring are warm; fall and winter can be cool. Layered clothing is advised. 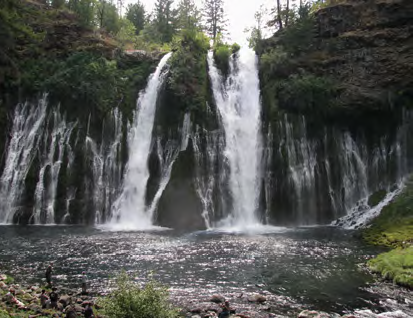 (Photograph by Michael Wopat)
McArthur-Burney Falls Memorial State Park
Burney Falls at McArthur-Burney Falls Memorial State Park is an outstanding example of a waterfall and stream fed by large springs that are commonly associated with areas covered by recent lava flows, and also of a waterfall formed by the undercutting of horizontal rock layers. The soft white rock is diatomite. Its presence is evidence that a very large lake once filled the region and supported abundant tiny freshwater plankton called diatoms.