GEOLOGY
Castle Rock’s famed Vaqueros sandstone originated as submarine fan deposits on the continental shelf about 30 to 40 million years ago. The deposits were elevated and moved north by repeated violent movements along the tectonic plate boundaries now defined by the San Andreas Fault. Over the eons, outcrops have eroded to form pits, pockets, honeycombs, caves, ribs, and ridges. Referred to as tafoni, these erosional patterns have endless variations. 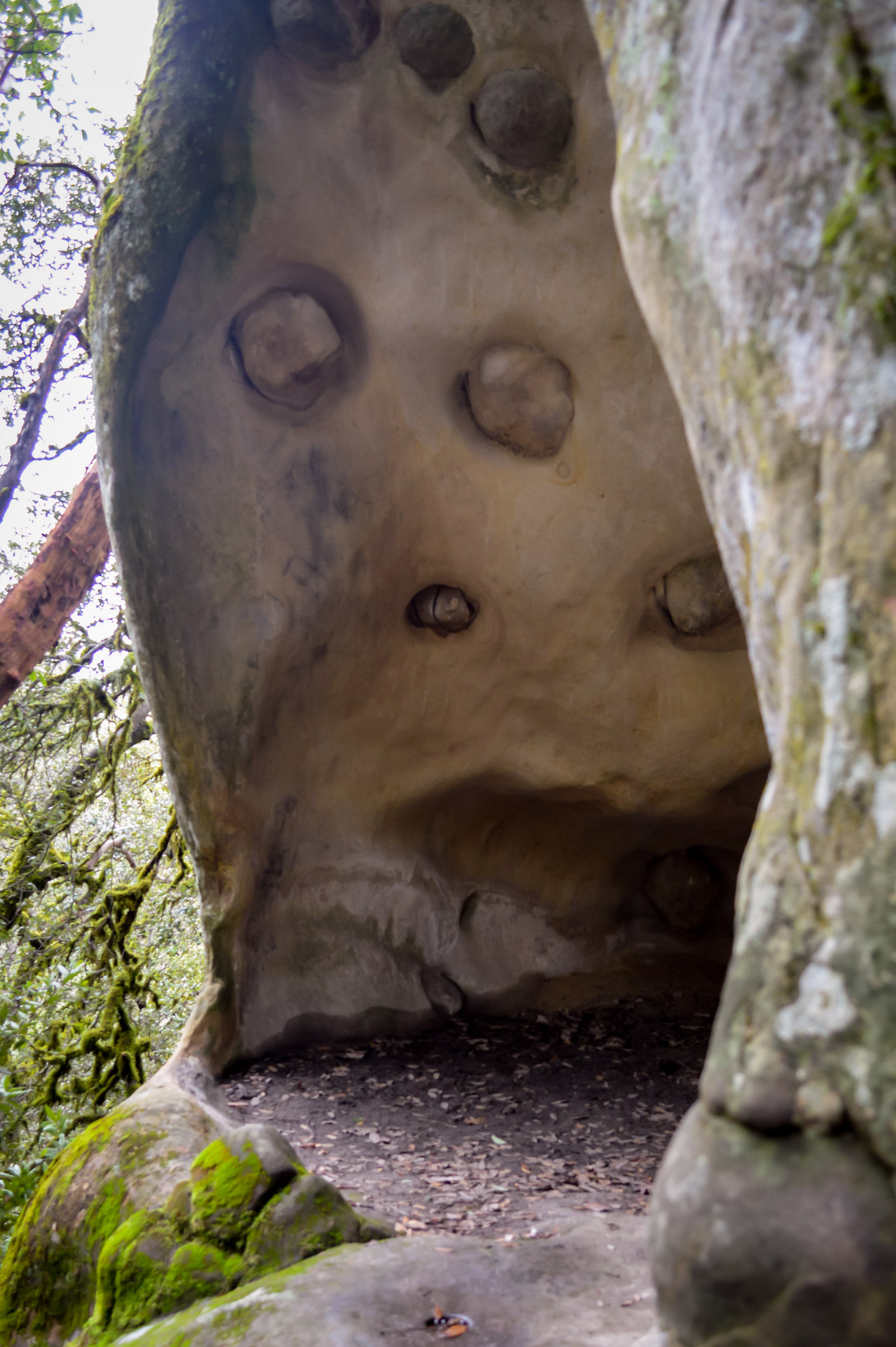 The sandstone is made of coarse grains of cemented sand. The local Mediterranean climate (wet winters and long, dry summers) sets the stage for what  occurs. During the rainy season, slightly acidic rain water seeps into the rock, gradually dissolving minerals that hold the sand grains together. Throughout the dry summers, water wicks to the surface and evaporates from the rock, leaving the minerals behind. This forms a strong crust on the outer part of the rock but weakens the inside. Where the cementing materials are missing, sand grains collapse, leaving pockets, cavities, and caves. When the surface of the rock breaks and falls away, erosion occurs more rapidly. 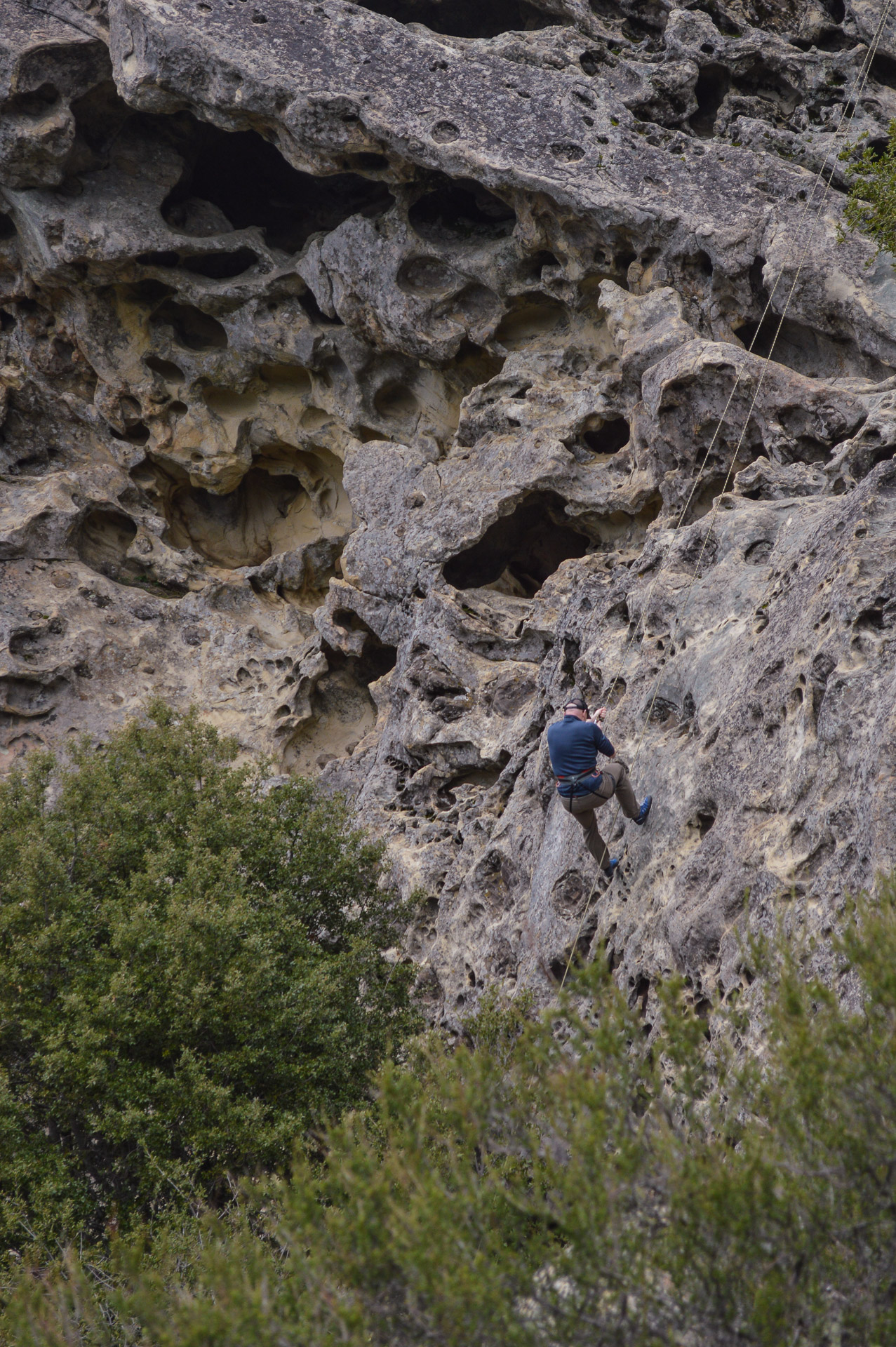 Oak Woodlands
Evergreen coast live oaks, canyon live oaks, and deciduous California black oaks yield abundant crops of acorns. Birds and squirrels flock to these woodlands to eat and stock up for winter. Look and listen for the raucous calls of acorn woodpeckers. See if you can spot where they stow their acorns.
California black oaks are rarely found elsewhere in the Santa Cruz Mountains. Here they occur at higher elevations, near ridgetop grasslands and in mixed evergreen and oak woodland habitats. Their large acorns attract dozens of species of birds and are sought after by western gray squirrels and black-tailed deer. Owls, woodpeckers, and squirrels use their branches and trunks for nest sites and dens.

Ridgetop Grasslands
Castle Rock’s ridgetops have thin soils exposed to sun and wind. Purple needle grass, golden nuggets and other wildflowers populate these open areas, which also offer forest and ocean views. Gophers, voles and mice feed on grassland seeds. They, in turn, are hunted by snakes, hawks and owls. 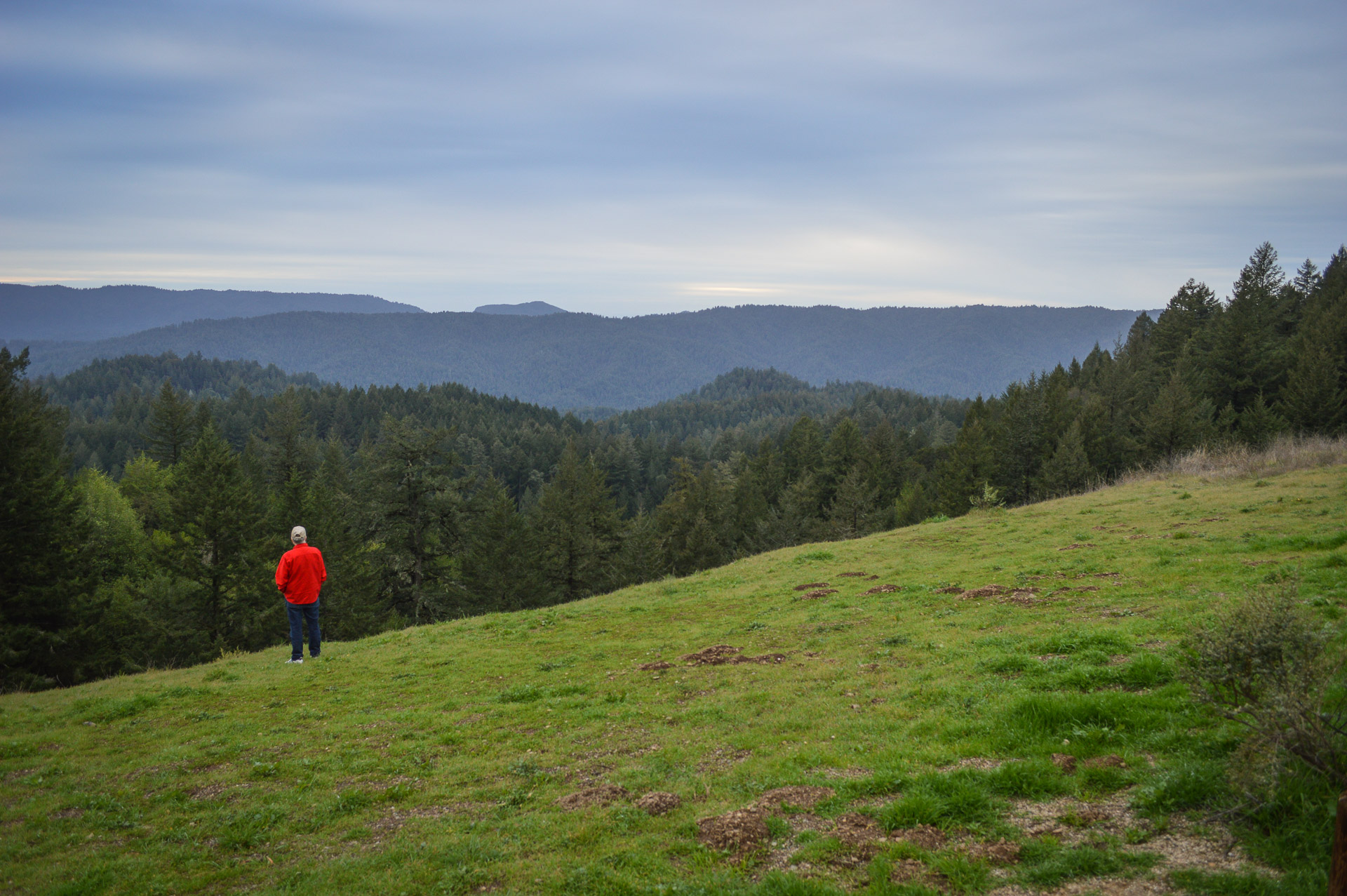 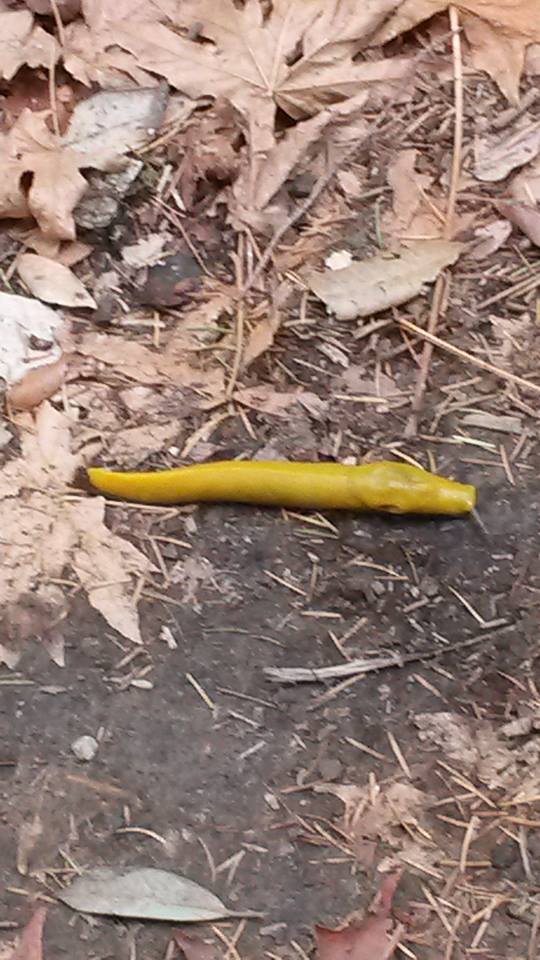 Bats feed on insects in the evenings. Brown creepers travel up tree trunks, probing beneath bark for bugs. When they reach the top, these one-way birds fly back down to begin again.

Snags and Dead Wood
Dead trees or snags and downed logs are an important for forest life. Snags are homes for bats, woodpeckers, swallows, salamanders, and insects. Decomposing logs and large branches provide nutrients and hold moisture. They feed and shelter rodents, reptiles, amphibians, and insects. You may see ferns, fungi, and even young trees sprouting from dead logs. 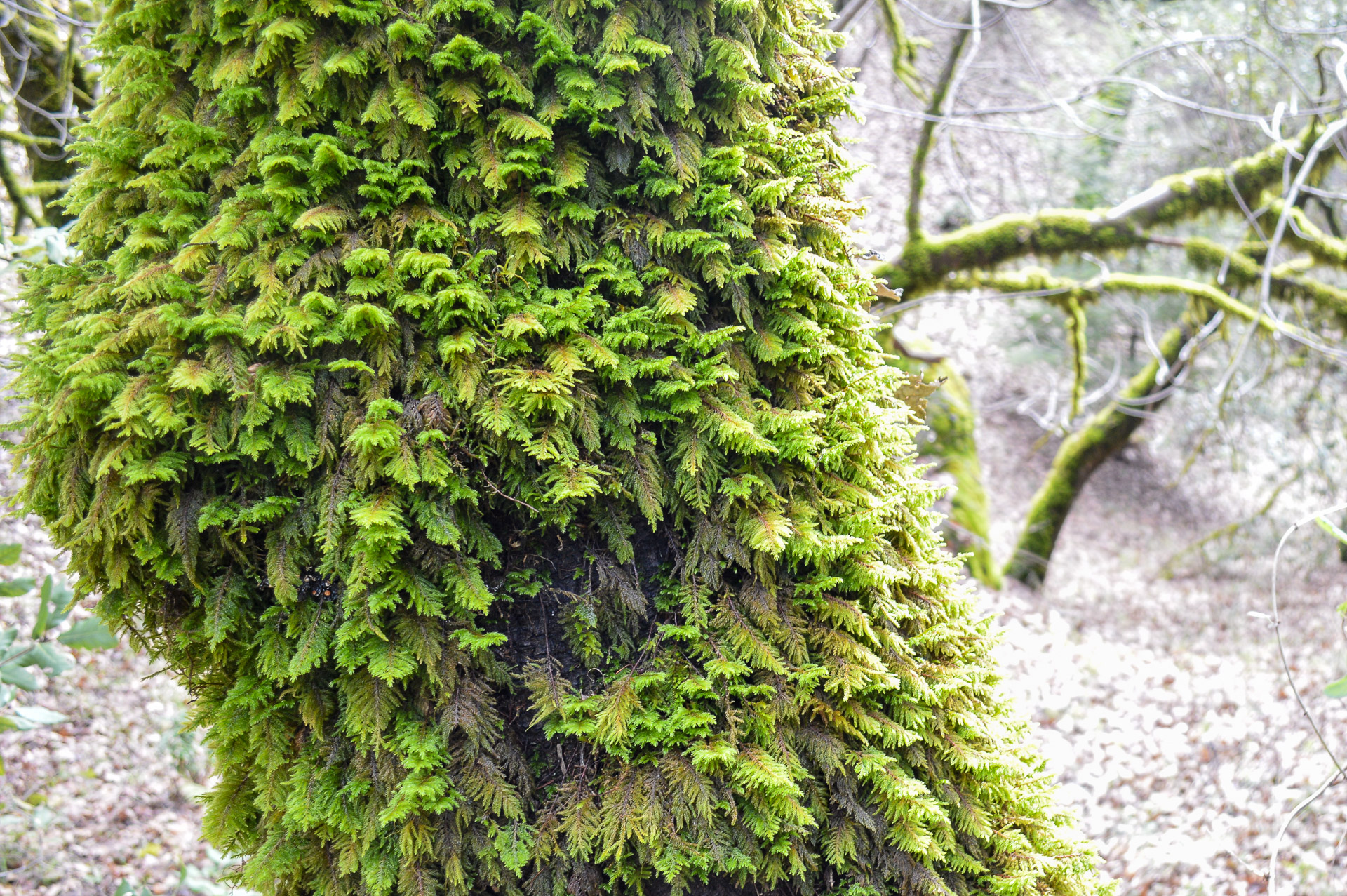 Chaparral
Chaparral includes dense thickets of woody, drought-tolerant shrubs such as chamise, toyon, manzanita, coffeeberry, coyote bush, and bush monkeyflower. Many birds, such as wrentits, wrens, and towhees are attracted to chaparral for its plentiful berries, seeds, and insects. Mice find shelter and live on seeds and insects found beneath the leaf litter. Coyotes and foxes feed on birds and rodents. 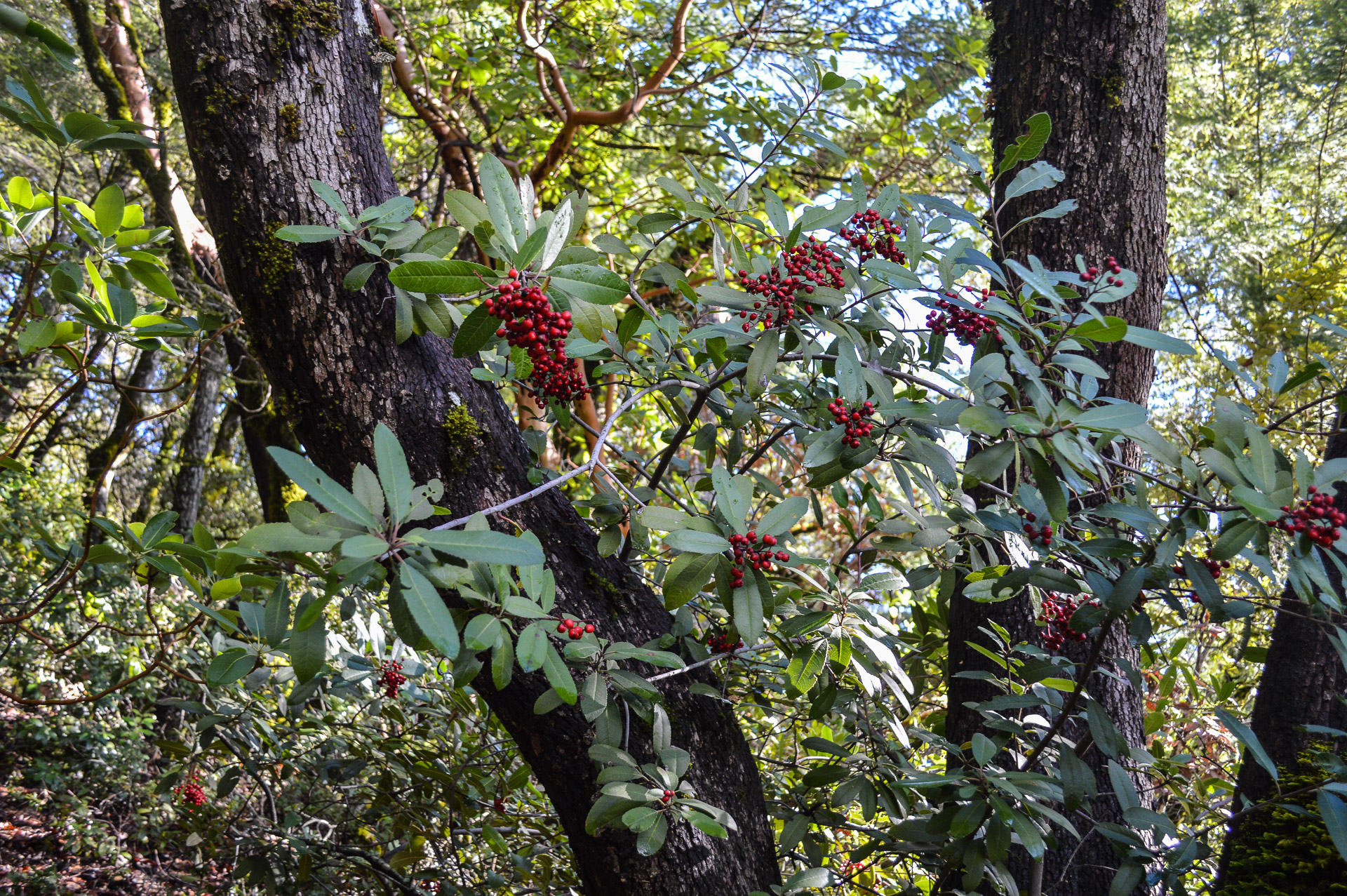 CLIMATE CHANGE
In a time of climate change, redwoods are an asset. Their size and longevity help them store more climate-altering carbon dioxide than other plants. Even old redwoods continue to grow, each year adding more carbon-filled wood than smaller, younger trees. After redwoods die, their rot-resistant wood keeps that carbon out of the atmosphere for a long time.
Could redwoods be harmed by climate change? They do not seem to be suffering so far. However, scientists say that increasing temperatures, along with decreasing summer fog, could pose a threat in the decades to come. To find out more about the effects of climate change in California’s redwood parks, go to this Save the Redwoods League web page.