“Cool Parks” is an initiative by California State Parks that responds to the pressing challenges of climate change. This program will identify and address emerging environmental threats to the resources of the State Park System. It will engage not only those who manage and interpret our parklands, but park visitors and the broader public as well.

Scientific evidence overwhelmingly indicates that California’s climate is warming—along with the planet’s as a whole. Globally, the ten warmest years on record have occurred since 1995.

In California, recent decades have seen an increase in average air temperatures and summertime heat extremes. These statistical findings are accompanied by shrinking mountain glaciers, fewer foggy days along the North Coast, and an eight-inch rise in sea level at the Golden Gate during the past century. Also, tree deaths in the Sierra Nevada and the frequency of large wildfires have both increased. 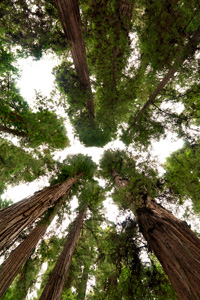 Fewer foggy days along the coast may pose problems for California's famed coastal redwoods--fog is a primary source of the moisture needed by these magnificent trees.

Data gathered over the past half-century show a steady rise in the amount of heat-trapping carbon dioxide that our atmosphere contains. This rise continues a longer upward trend that began about the time of the industrial revolution.

Climate scientists now generally agree that human-caused emissions of carbon dioxide and other “greenhouse gases” are a key factor in the current warming trend. The State of California officially embraces this conclusion.

Check out our pages linked to the right that focus specifically on the prospects for our parks as a result of climate change, parks' unique role in studying and combating climate change, and the "Cool Parks" response to climate change. There's also a "You Can Help!" page to direct you to specific actions you can take. We've also created a web-friendly version of our new "Climate Change and California State Parks" brochure.

Be sure to also visit the State of California's Climate Change Portal for information about what other State agencies and departments are doing.