When trees breathe they take in carbon dioxide, release oxygen and store carbon in their trunks. Trees lock away carbon in a more permanent way than other plant species due to their size and relatively longer life spans.

This process, called carbon sequestration, is something California’s redwoods do better than just about any other species on the planet. When given the right conditions, redwood trees gain height and girth quickly. Underground, forest soils and root structures store even more carbon. Because redwoods live for thousands of years, they are a very long-term source of carbon storage. 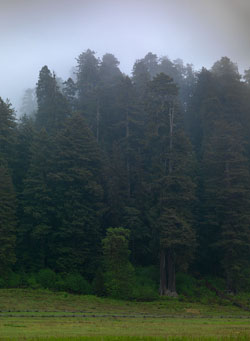 Both young and old growth redwoods (which grow in many state parks, like Prairie Creek Redwoods State Park shown here) take CO2 out of the air, storing it for generations.

Due to logging and development, an estimated 93 percent of our valuable old growth redwoods have been turned into lumber, mulch and firewood. California is the only place in the world where redwoods thrive, and state parks are home to the largest stands of remaining old-growth redwoods. State parks also manage valuable second and first growth forests, creating opportunities for more greenhouse gas storage, and facilitating natural forest growth.

Undisturbed forests do the best job at sequestering carbon. Cutting down trees inevitably alters carbon storage, and releases carbon dioxide into the air as the wood decays. Twenty percent of greenhouse gas emissions come from deforestation and other forms of land use change.

Undisturbed forests in state parks have more plant and animal species (are more biodiverse) and this leads to forest health. Healthy forests are more able to adapt to the challenges presented by climate change including changes in temperature, soil moisture, and water availability. The result is an improved capacity to regenerate after fire, as well as resistance to and recovery from pests and diseases. Protection of undisturbed forests in parklands is one of the best ways to ensure maintenance of biodiversity over the long term.

Marshes also sequester carbon. When coastal marshes are drained, soils ploughed or lands burned, the carbon stored there is exposed to oxygen with which it forms CO2 and finds its way into the atmosphere. There it persists for a long time, trapping heat as a greenhouse gas.