A single California valley might contain several microclimates. In the fog belt it might be drizzly and misty all day long, even while a mile or two away the sun is shining in the banana belt. When comparing networks of valleys, California sees just as much diversity. Redwood groves meet grassland meadows, snowy mountains fall to desert floors, and temperate belts facilitate year-round agriculture.

This is one of the reasons California is teeming with tall trees and diverse and plentiful ocean life. It’s a state full of biodiversity hotspots—areas where microclimates and evolution have fostered pockets of rare plants and animals. Yet microclimates are sensitive to changes in temperature and precipitation. Small climate changes have a big impact. This is one of the reasons hotspots will suffer as climate change continues. 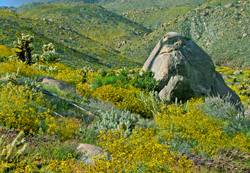 Parks, like Anza-Borrego Desert State Park (pictured here), preserve and protect some of the richest "biodiversity hotspots" on the planet.

In fact, state parks in California represent the “hottest of hotspots” by protecting ever more endangered plant and animal species. By preserving these ecosystems, we help address climate change.

In addition, parks create buffers around hotspots. By providing open space zones around critical habitats, resiliency is increased. These buffers assist ecosystems in their struggle to maintain balance.

Preservation not only makes biodiversity hotspots more resilient to change, but buffers provide plants and animals with space to expand and shift.

California State Parks also connect habitats, providing opportunities for displaced species to relocate. In light of climate change, many species are beginning to seek higher elevation habitats where precipitation and temperature now mimic the climate in lower region. As species move, they will need protected corridors to migrate.

Climate change poses a particular threat to existing wildlife corridors. Businesses and homes may have to move, posing new development threats to open spaces. By connecting high elevation hills to the beach, and linking valleys together, parks preserve corridors from development.