Frank Milner's Barbershop
Frank Milner arrived at Allensworth from the Bay Area in 1911 and set up his first barbershop in a small frame house. Milner’s barbershop played an important part in the early Allensworth community. The men of the town met at Milner’s to argue over "all manner of agreements and disagreements." (Armilda Archer Smith noted that "Women didn’t go in barbershops in those days.") The community orchestra, organized by Joshua Singleton, practiced in the shop.

The Milner barber shop is first class in its accomodations. Plans are already drawn for a large building, the sand  and molds being on the ground for the creation of a cement block house, containing barber shop, pool room, bath, cigar business acumen and a valuable asset to Allensworth.   (The Oakland Sunshine, December 27, 1913)

In 1914, he built a concrete block structure on this site. Josephine Hackett recalled its construction:

Mr. Milner and helpers mixed sand and cement together, poured the mix into a press, and soon a rectangular block would be formed. As these became dry and firm enough to hold together, they were put into place to form the walls of the building. A large picture window was installed in the front wall, and a stationary barber’s pole was cemented into a hole just outside the front door and painted with the customary red and blue stripes.

A neat barber shop is operated by Mr. Frank Milner, a young man of energy and tact, who came here to visit the colony about three years ago, and never left. He is one of the young men of the race that many about the cities might emulate success. Mr. Milner also owns several pieces of outlying land.  (The California Eagle, October 3, 1914)

In the early 1920s, as Allensworth’s economic problems grew, some of the settlers moved on. By 1924, Frank Milner had established his barbershop in Tulare. He was in business there for many years, and among his customers were men who had once been his neighbors in Allensworth.

The last two images are of the only remaining concrete block from Frank Milner's barbershop.
It was recovered during excavation 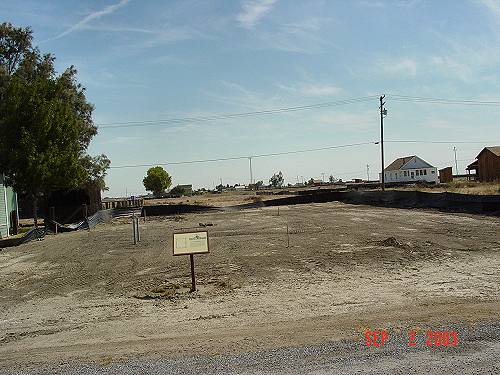 The current building program at Colonel Allensworth SHP includes the reconstruction of Milner's barbershop. The structure was important both for the town’s history and as an example of its architectural diversity. The barbershop was the only concrete block structure in Allensworth. Over time, it had been completely dismantled, with only the concrete foundation walls remaining. This picture was taken in September 2003 at the Milner's barbershop reconstruction site. Excavation work has been completed. 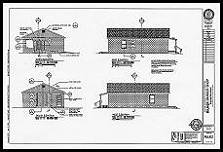 The archaeological work at Milner’s barbershop is planned to include public demonstration and participation. Testing was ongoing during the Annual Rededication of the park in October 2001. An information board was set up in front of the site, and the crew took turns explaining the methods, purpose, and results of the testing. Back dirt, from which diagnostic material had been removed, was piled near the site, and visitors of all ages were invited to screen. Crewmembers helped to identify the finds and stressed saving them according to site area. Public response was overwhelmingly positive.  Artifacts recovered from the Milner barbershop site include:

Archaeological testing was conducted to expose the foundation, as well as two interior walls and the remains of a storage cellar. Shallow units, one at the southeast corner and one at the southwest, showed the depth of the foundation. Two deeper units in the northeast quadrant established the location of the cellar. Trenches, one east-west and one north-south, revealed the interior walls.

Click on the thumbnail below to view the full-size image.