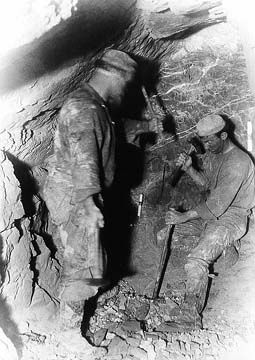 Within two years of James W. Marshall's discovery of gold in 1848, great hordes of '49ers had panned out most of California's gold-bearing streambeds. Only a few miners had any real idea of the quantities of gold that were locked beneath the surface of the Sierra in sheet-like veins of quartz. But in June 1850, George McKnight discovered a gold-bearing quartz outcropping about a mile from here (near St. Patrick's church in downtown Grass Valley). Then, in October of 1850, a lumberman named George Roberts found flecks of gold in a surface outcropping of quartz where the park's main parking lot is now.

Hearing the news, hundreds of miners flocked to this area to stake out the customary 40-foot by 30-foot placer claims. They soon found, however, that they lacked the skills necessary to tunnel deep into the earth. Chipping and blasting rock was hard and dangerous work. Cave-ins were frequent, and tunnels were continually being flooded by underground springs. By 1851, the land was perforated with hundreds of "coyote holes" - vertical holes in the ground, 20 to 40 feet deep, that resembled water wells. Miners were lowered into these holes in buckets. George Roberts, like many others, became discouraged and sold his claim for $350 to a group that was consolidating small claims into a single operation to be known as the Ophir Hill Mine. In 1852, the Ophir Hill Mine property was purchased by John Rush, who changed the name to Empire Quartz Hill Company.