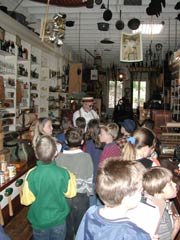 The Litsch General Store was owned and operated by the Litsch Family from 1850 to 1950. The store experienced many changes over the 100 years it was in operation.

California State Parks now operates the Litsch Store as a General Merchandise Museum. The store has been restored to the 1880s appearance and contains many original items that were actually for sale at that time.