Though Lake Perris was established to provide Southern Californians recreational opportunities in boating, picnicking and swimming, camping, hiking, and others, the park is also home to many species of animals and plants native (and some not native) to the Southern California.  Additionally, the park holds a past of rich cultural history.

Here, you can find information on some of plants, animals, and historical stories of Lake Perris SRA.  On the right side, you will find links to common animals in the area, and below you will find descriptions of the natural plant members and communities that make up the landscape of Lake Perris, as well as the human history of the park. 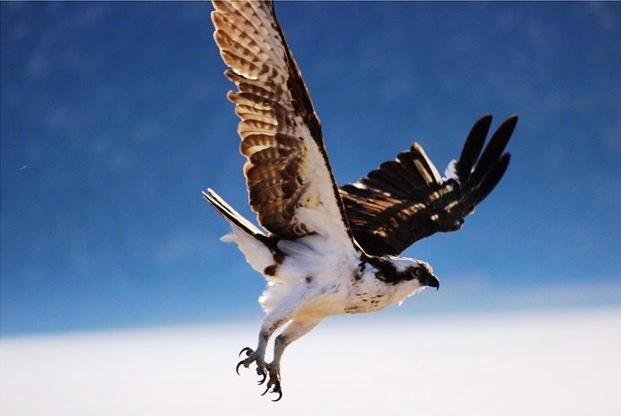 Respect the park's resources!  This for your safety, and animals, and our heritage.  Remember, never feed or approach animals in the park.

-Brittlebush:   Also known as the Desert Encelia, the brittlebush is the most common plant found in the Coastal Sage Scrub habitat around Lake Perris. Like many other members of the daisy family, the brittlebush produces beautiful yellow flowers in the spring that attract butterflies. Its gray-green leaves are a steep V-shape, which reduces the amount of surface area and helps to minimize water evaporation and the amount of direct sunlight that it receives.  Additional adaptations to this Mediterranean climate are “waxy” leaves with a surface that also reduces evaporation for water conservation and a deep root system to reach groundwater. As the heat of summer increases, the brittlebush loses many of its leaves; that is to say, it is “drought deciduous”, dropping its leaves as heat increases, unlike deciduous trees that lose their leaves as temperatures decrease in the autumn.

-White Sage:  Hiking along the trails up to Terri Peak, this strongly aromatic bush becomes apparent. This plant was used by the local Native Americans as food and as an herb for cooking, but its scent was also rubbed on the body to cover the human smell of the hunters. The evergreen plant never loses its large, grayish-green leaves, and in the spring, there are many white flowers that are followed by large seed pods that provide another source of food.

-Chamise:  A member of the chaparral community, chamise, also known as greasewood (due to the oily leaves), can be found as green shrubs on the north side of the Bernasconi Hills and Russell Mountains.  Preferring a bit more shade and moister soils than other common species in the park, this plant rebounds well after fires, sprouting from its stump.  This member of the rose family has small, evergreen leaves that are spaced in groups along the brown, woody branches and tiny white flowers form at the tips of the branches. The shrub can grow to be quite tall (4m, about 12 ft).

-Buckwheat: Another one of the most common plants found throughout the park, this small shrub is very drought tolerant. It can flower wonderfully at any time during the year, but most commonly does so in spring.  Look for small white and pink flowers on a bunchy green bush in spring. It may turn brown in summer and drop all of its small narrow leaves (drought deciduous).

-Blue Elderberry: This small tree or large bush is native to California canyons and produces many small berries that are a favorite food for birds and small mammals. Historically, the berries were used by Native American tribes. The blue elderberry prefers a moister soil, and its presence can be seen as an indicator of higher water content in the soil. The white flowers of spring attract bees and other pollinators, and then the tree produces dense masses of blue berries. It will drop its leaves during the driest months.

Always remember to keep wildlife safe and healthy by not feeding or touching them.  Keep a respectful distance away from them, and you will see more of their natural behavior!  Here are some of the residents of the park:

Black-Tailed Jackrabbit:  A large member of the rabbit family, this creature has extremely strong legs and very large ears.  It can be seen anywhere in the park.

California Ground Squirrels: These little animals are arguably the most commonly seen mammal in the park.  They are primarily active in the daytime (diurnal), when you may see them foraging. They dig burrows underground and live in colonies.

Mountain Lion: The largest carnivore in California, the mountain lion (also called Cougar, Puma, or Panther) is a solitary creature, preferring to spend its days high in the hills or in remote valleys away from people. Its territory (the land it uses exclusively) can be over 100 square miles, so the same individual is not often seen in the same place on consecutive days.  Its main food source in this area is Mule Deer, and to catch it, the mountain lion can leap up to 20 feet!  The mountain lion is more related to a house cat than to any of the other large cats such as a lion or jaguar. It can purr like your house cat; it cannot roar!

Red-Diamond Rattlesnake:  The Red Diamond rattlesnake is endemic to the warm region around Yucaipa down into Baja California.  It is an amazing creature to be admired from afar as it is highly venomous. The tail rattle of all rattlesnakes is made of keratin (same material as your fingernails), and it can vibrate up to 50 times per second, which produces the rattling sound. If you hear this sound, you are being warned, so do not approach or try to find the snake!

Granite Spiny Lizard: Watch for these little creatures in warm weather when you will find them basking on rocks.  Males are dark with orange and blue tints and, while females are brown with orange markings.

Red-Tailed Hawk:  These grand raptors (birds of prey) ride thermal air waves in the sky as they search the ground for their next meal, which may be a rodent, reptile, or even another bird.  The characteristic red feathers on their tails are most obvious as they soar above you with the sun beaming through the feathers.

Turkey Vulture:  Another large bird you may see soaring in the park is the turkey vulture. These birds circling in the sky are usually the first sign that an animal has died.  Their extremely powerful noses are much more sensitive than other birds, and they can smell a decomposing body from a distance. They prefer freshly dead animals, but they are sometimes seen eating live fish in drought areas where the water is drying up.