Californians in The Civil War

This newspaper advertisement appeared throughout Northern California's newspapers in late 1862.  The response was so overwhelming that hundreds had to be turned away.  This regiment, known popularly as the "California 100" would become the most famous of all California units during the war, participating in such important battles as Petersburg and Gettysburg. 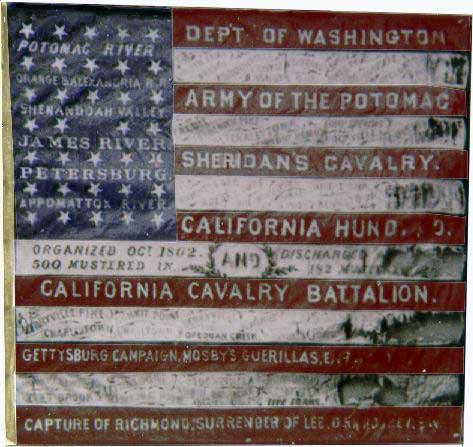 Flag presented to the members of the "California 100" after the war, illustrating the many important battles this veteran unit participated in.

This photo shows the Third Infantry of California Volunteers band in 1861, shortly before their departure to protect mail routes in the West.  This unit's principle military actions would be against the Shoshone in eastern Idaho, and in the Battle of Bear Creek (also known as the Bear Creek Massacre), the California 3rd lost 14 of its men, while killing hundreds of Shoshone men, women, and children, and effectively opening up the Cache Creek region of Idaho for widespread white settlement.  Like many California units, the men of the California 3rd were disappointed to be serving outside the main theatre of war, and the men went so far as to offer $30,000 of their own pay in asking to be sent east.  While this change in theatre was not approved, the regiment was sent in 1862 to establish Fort Douglas, near Salt Lake City to calm fears of Mormon secession and to ensure that California (and her valuable gold shipments) would not be cut off from the rest of the Union.  Fort Douglas, named by Lincoln himself for his former opponent Stephen A. Douglas, would remain an active army post until 1991. 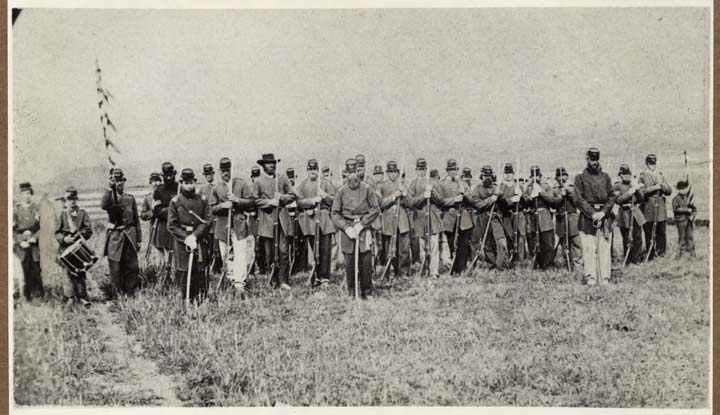 Companies were formed throughout the young state, as the patriotic fervour that swept throught the Northern states was similarly felt in the Union state of California.  This company, formed in Hayward in 1861, would see most of its action in protecting white settlements and overland routes of the American West, much to the dismay of the young recruits who dreamed of fighting the "traitors" of the Confederate rebellion.