Colonel Allen Allensworth, born a slave, rose to prominence as the highest ranking black officer of his time by the time he retired in 1906.  In 1908, Allensworth created the town named in his honor to operate as an independent and self-governed ranching and farming colony for free blacks.  Complete with its own school, a church, and a bank, the town of Allensworth offered a safe haven for over 300 families of free blacks that had continued to be oppressed and controlled under a Southern sharcropping system that was designed to keep blacks on the same plantations that they were working before the war.  His courageous story, as well as the story of other 19th century African-American war veterans, personifies the gains made by black Americans after the war in terms of respect, but also shows us how some African Americans delt with continued injustice after the war.  Upon Allensworth's death in 1914, however, the town had little political power left, and slowly deteriorated. Many of the town's orignal structures, which offer an eduring insight into Allensworth's vision for a free black society, can still be visited. 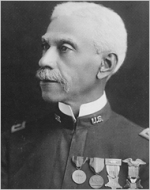