For more information about each of these facilities, including upcoming special events and exhibits, please scroll down to the various links below: 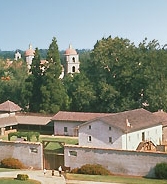 Sutter's Fort State Historic Park
From 1839 to 1849, Sutter’s Fort was the economic center of the first permanent European colonial settlement in the Central Valley. During that time, the Fort catalyzed patterns of change across California. No one felt those changes more acutely than the diverse Native peoples who helped build the Fort, and whose exploited labor made its many industries possible. Self-guided tours take visitors through an orientation exhibit as well as several recreated historic rooms. Visit the Sutter's Fort SHP website.

State Indian Museum
The State Indian Museum, opened in 1940, depicts three major themes of California Indian life: Nature, Spirit, and Family. Cultural items on display include traditional baskets, a redwood dugout canoe, ceremonial regalia, beadwork, and hunting & fishing tools.  There is also a hands-on area where visitors learn to use the pump drill to make holes in shells for beads and the mortar & pestle to grind acorns.
Visit the State Indian Museum website.     Learn about the CIHC.

Woodland Opera House
Built in 1885, the original Opera House burned down in the 1892.  It was rebuilt on the same site, using some of the remaining foundations and bricks from the walls, reopening in 1896. It became the stopping place for such performers a Nance O' Neil and Harry Davenport. The great Polish actress Madame Helen Modjeska and John Philip Sousa were some of those who preformed on its stage.
View the Woodland Opera House website.