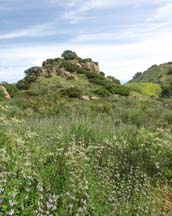 Santa Susana Pass State Historic Park
Santa Susana Pass State Historic Park is located in Los Angeles County, south of the Ronald Reagan Freeway (State Route 118).  The Park is bordered on the west by Ventura County line, on the east by Chatsworth Park South, as well as the community of Chatsworth along the east and south.  As stated in the Commission's classification documents, the Park land was acquired primarily to protect cultural resources, including the Old Santa Susana Stage Road, a feature listed on the National Register.  Recognizing the importance of preserving these significant resouces, California State Parks is committed to developing a long-range plan for protection, management, and enjoyment by current as well as future generations.

Wildfire engulfed the Park In the fall of 2005, burning much of the existing vegetation, and exposing some of the cultural resources.  Therefore, the development of this general plan comes at a timely juncture of the Park’s development.

General Plan Process
A General Plan is mandated for all state park units by the California Public Resources Code.  As a primary management document for a unit of the State Park System, the General Plan establishes the purpose and management direction for the future.  The plan does not provide specific design solutions or location of facilities.  However, it does provide vision, goals, and guidelines for future management decisions as well as Park development.

Second Public Meeting -- June 20, 2006
Held at Chatsworth Recreation Center (Chatsworth Park South), this meeting was for presentation of updated progress/alternatives on the General planning effort, based upon ongoing research and planning, as well as the valuable input received from the first public meeting.

Third Public Meeting -- October 25, 2006
Also held at Chatsworth Recreation Center, the goal of this meeting was to present the preferred alternative, based on public input along with research information gathered by staff.  (Note documents from this meeting  along the right side bar)

California State Park and Recreation Commission Briefing -- February 28, 2008
Site visit of the park by the Commissioners guided by the District and Service Center staff