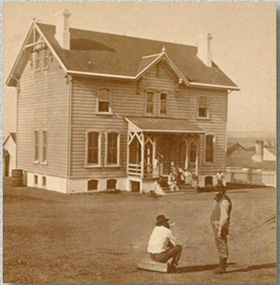 The early lighthouse Keepers lived with their families in a Victorian-style house located where the Hostelling International bungalows stand today. The bungalows were built in 1962 for the last Keepers of the light--the men of the U.S. Coast Guard who manned the station from 1939 until 1972, the year the facility was automated. From 1871, when the lighthouse was built, until 1910, the operations were administered by the United States Lighthouse Board, and the Keepers were appointed by the President of the United States. In 1910 management was assigned to the Bureau of Lighthouses under the Department of Commerce, and in 1939 the U.S. Coast Guard assumed responsibility for aids to navigation.

The early Keepers worked a grueling round of difficult jobs every day. Before the light was lit at sunset, they washed the windows of the lantern room, cleaned the Fresnel lens, hauled fuel to the top of the tower, trimmed the lantern wicks and adjusted the air flow through the light apparatus. They stood watch over the light throughout the night and kept the fog signal operating when visibility was obscured. To maintain the buildings and machinery, the Keepers were also skilled as carpenters, painters, steeplejacks and mechanics.

The remote location of Pigeon Point, and the lack of reliable roads along the coast, made it necessary for steamers from San Francisco to supply the station with mail, fuel, and hardware once a month. The Keepers' families maintained produce fields, an orchard, a dairy farm and livestock to supply themselves with food.

In 1962 the Coast Guard demolished the original Victorian structure. In its place they built four bungalows for the Coast Guard personal and their families. These are now rented by the Hostel.