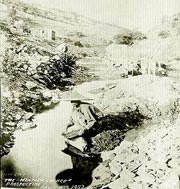 The gold rush of the Trinity Alps began about the same time as the one in the Sierra Nevada foothills, in the mid-1800s. The news of gold in California quickly spread around the world, and some of the gold seekers came from China. In July 1848 Major Pierson B. Reading found gold on a sandbar in the Trinity River, and the following gold rush duplicated those in other parts of California.

Though a few Chinese had probably come to California in 1840, there were only 54 Chinese men and one Chinese woman here by early 1848. But several thousand-most from the province of Kwangtung-arrived with the thousands of other gold seekers who came to the region. Some from a small area that included the Pearl River Delta, arrived in Trinity County around 1851. By 1854, about 2,500 Chinese were working in the placer mines. The miners spread out and quickly established claims on the creek and cuts in the mountains, and large Chinese settlements grew up not only in Weaverville but in Douglas City, Lewiston, Junction City, Quinby on New River, and Don Juan Bar. They often reworked mines that had been abandoned, achieving success through hard work and diligence.

Life in the mining camps was rugged, and most of the Chinese in Trinity County during this period were men, although some brought their families when finances and laws permitted. Some returned to China after they had accumulated enough money from their mining efforts to give them a better life back home. The Chinese worked hard and many were successful despite the high tax -- $4 each per month on foreign miners; they sent much of the money they earned back to their families in China.

Many others moved to other parts of California to continue mining or take up other trades. Many opened businesses, and in Weaverville the Chinese had their own stores, a bakery, and a restaurant. For entertainment they had an opera house, and traveling troupes of Chinese actors played at the two theatres.Their prosperity triggered jealous resentment in the other miners, leading to several outright conflicts.

By 1865 mining began to fade as a source of income, and the railroads needed workers, so many Chinese left Weaverville to work on the Central and Union Pacific Railroads. The number of Chinese employed by the railroads jumped from 2,000 in 1865 to 15,000 in 1869. Many more left when the main part of Weaverville's Chinatown burned down in 1906.