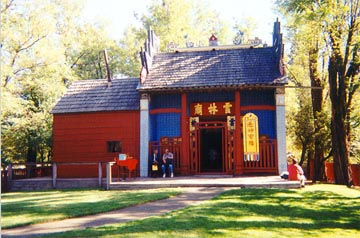 About 1852 or 1853, the Chinese erected a place of Taoist worship at Chimney Point in Weaverville. In its original form, Tao -"The Way"- aimed at serenity through harmony with nature, to be achieved by each individual's eliminating ambition and attaining purity and simplicity.

Elements of other eastern religions were incorporated, including Buddhism, Confucianism, and reverence for ancestors. They revered many spirits and forces, both natural and supernatural. There were beneficent spirits (shen) and malevolent spirits (gui). Throughout their beliefs is the essential unity of mankind and the environment.

In June, 1873 a nearby cabin caught fire, and the fire jumped to the Joss House and destroyed it. The original temple building and most of its furnishings, some of which had come from China, were destroyed in that fire. In October, 1873 local Chinese contributed generously to build a new temple (a record of the contributors' names, written in Chinese, still hangs in the conference room next to the temple).

Construction of the new temple began in February 1874, and it was dedicated the following April. This new structure was called the "Temple of the Forest Beneath the Clouds." It is this temple-a wooden structure-that still stands. Fire was always a hazard. The Joss House escaped major fires in Weaverville in 1896 and 1905. The 1905 fire destroyed most of the buildings of the Chinese community. The temple caught fire in 1907, but the fire was quickly extinguished.