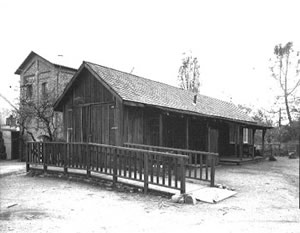 Gold mining had created the town of Folsom, and indirectly lead to the construction of the Folsom Powerhouse. The man who first sought to harness the American River for generating power for industrial purposes came to California in 1850 following the lure of gold. By the early 1860s, Horatio Gates Livermore had gained control of the Natoma Water and Mining Company, a firm that had built a network of dams, ditches, and reservoirs that supplied water to the numerous gold mines in the American River area. Looking beyond the immediate service to these mines, Livermore hoped to apply water power to operating a sawmill and other industries in and around Folsom. In the mid 1860s, he started construction on a dam to provide a holding pond for the logs cut in the higher foothills, and sent down the river. This task was more formidable than he had anticipated, since labor costs would be so expensive for quarrying the stone and building the dam and system of canals and ditches. The Natoma Company (Livermore) start built. By the late 1880s, a settlement was finally reached, and state officials agreed to provide prisoners for the dam construction.

Much had changed, however, while the delays held up the project. Livermore had died, and his vision of providing water power for infant industries in Folsom had to be revised. His two sons (Horatio P. and Charles E.) pressed ahead with the dam construction and the sawmill project. However, instead of building a system providing water for an industrial network driven by water wheels, the Livermores had embraced a new technology in their plans - hydroelectric power, that is, electrical generators powered by water turbines. Emerging from its experimental stages, the electrical power industry was trying to gain a foothold in manufacturing and transportation. A few electrical power plants had been successful on a limited basis in Germany and New York in the late 1880s and early 1890s; however, nothing had been attempted that was on the scale of the Livermore's endeavor. They sought to construct a canal 9,500 feet long providing water power to four of the largest electrical generators that had been built up the stone dam across the American River, and the bulkhead and headgates for the canal, and the canal itself was finished in 1893.

Folsom State Prison was the first to benefit from the dam when it put its own hydroelectric powerhouse into operation, also in 1893. Within two years, the Natoma Company's main powerhouse complex was completed, and was ready to transmit power to Sacramento. It consisted of four 750 kilowatt electrical generators (also called "dynamos"), each more than eight feet high, weighing more than 57,000 pounds. They were manufactured by the General Electric Company, and to quote a contemporary account: "these are without doubt the largest three-phase dynamos yet constructed..." (Journal of Electricity, vol 1, No. 3, Sept. 1895). Driving these generators were four McCormick dual turbines with a capacity of 1260 horsepower for each pair, which in turn were driven by water surging through four eight-foot- diameter penstocks. The generators have been altered a little over the years, and the governors for the turbines were replaced early in this century. However, the basic equipment is still in place, and was in operation until the hydroelectric plant shut down in 1952.

The Livermore brothers, in partnership with Albert Gallatin (president of the Huntington, Hopkins Hardware Company) formed the Folsom Water Power Company, controlling the dam and the canal, which supplied water to the Sacramento Electric Power and Light Company, also owned by the Livermores and Gallatin. The latter firm operated the power plant at Folsom, the substation in Sacramento, and the streetcar lines in that city. On July 13, 1895, with only two generators in actual operation, electricity was successfully transmitted over uninsulated copper wires the full 22 miles to Sacramento. Newspapers in Sacramento and San Francisco covered this event in detail on their front pages the next day. Sacramento celebrated this technological breakthrough with a "Grand Electric Carnival" on September 9, 1895, stringing electric lights along its downtown streets, and decorating the State Capitol with thousands of bulbs. The whole affair caught the attention of the entire state, and even the nation.