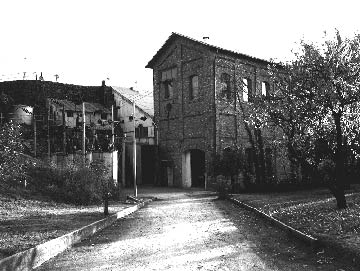 ..."It was 4 a.m. in Sacramento when a 100 gun salute shattered the quiet. People not planning on getting up early that morning never forgot it. But it was a memorable day for other reasons, too. It was when electric power arrived in Sacramento over 22 miles of line from the new Folsom Powerhouse."
- San Francisco Chronicle July 13, 1895

The Folsom Powerhouse, located on the west bank of the American River, may have seen more than one American or Canadian fur trapper in the 1830s and 1840s. While habitat for fur-bearing animals best suited for the fur trade was farther up stream, the gently sloping, thinly wooded terrain for the Folsom Powerhouse environs made it preferable for transportation by foot traffic and pack animals. There is no evidence that this was an often- used campsite by trappers, but it is likely that many passed this way.

The Gold Rush Era
The Gold Rush, as it did in so many other places in California, changed this dramatically. There is no documentation found so far that verifies gold mining at this particular location as early as 1848. However, it has been established that miners were working all along the stretch of the American River by late summer of that year. In 1849, the mining camp of Negro Bar was formed on the river terrace, just downstream from where the powerhouse is today. A few of the town's buildings may have been located this far up-river, but no features or historical documentation clearly indicates their presence. There are placer mining features within the powerhouse project area that pre-date the hydroelectric plant's construction; but so far, no evidence has been found indicating whether they date as far back as the period when Negro Bar was in existence (1849-1854). Placer gold mining in this general area of the American River was a continuous activity for more than 50 years after James Marshall's discovery.

The California Central Railroad
In 1856 the first railroad west of the Rocky Mountains was established between Sacramento and the new town of Folsom. The California Central Railroad's (CCRR) track skirted the site of the future powerhouse on the east, roughly following the route of present-day Riley Street and Leidesdorff Street. A substantial railroad trestle crossed the American River at about where the Rainbow Bridge is today. The Sacramento Valley Railroad (SVRR) endeavored to create a rail link between the rapidly growing river city and the gold mining towns of the central foothills. The SVRR built shops (substantial buildings made of brick) and a rail yard in Folsom, also near the present location of the powerhouse. Keeping up with the region's expanding economy and population, the CCRR constructed a rail line between Folsom and Lincoln, just west of Auburn, in 1861. The Central Pacific Railroad acquired the CCRR, and removed its tracks between Folsom and Roseville in 1868.