Fannette is the only island to be found in all of Lake Tahoe. It is located in beautiful Emerald Bay on the west shore of the lake. A sparsely timbered, brush covered upthrust of granite that rises 150 feet above the water, Fannette Island was not always known by that name. During the past 100 years it has been known as Coquette, Fannette, Baranoff, Dead Man's, Hermit's, and Emerald Isle. Fannette was the name that finally stuck.

Geologists know that Emerald Bay was gouged out by glaciers thousands of years ago. So why did Fannette Island remain? It is believed that the island is a resistant rib of granite rock which was overridden by the glacial ice.

The stone structure on top that looks like a miniature castle is the "Tea House" built during the same time that Vikingsholm was constructed, from 1928-29. After being transported to the island by motorboat, Mrs. Knight and her guests would occasionally be served tea there. A small fireplace in the corner and a large oak table and four oak chairs in the center of the 16 by 16 foot room gave it a very rustic appearance.

The tea house has been vandalized in recent years and today only the stone shell remains.

Camping is prohibited and dogs are not allowed on the island.

Pack it in / Pack it out. Please help keep the island and waters clean. 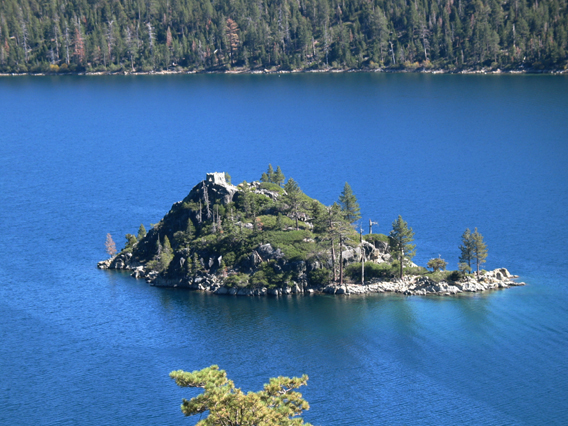 Day use only
Sunrise - Sunset