This park unit is open at limited capacity. Please take the time to read the information contained on this webpage to find out what is open and closed, and what COVID-19 guidelines are in place. - (May 28, 2021)

The park is 70 miles northwest of Los Angeles, near the top of Grapevine Canyon, via the Fort Tejon exit off I-5.

Fort Tejon is located in the Grapevine Canyon, the main route between California's Great Central Valley and Southern California. The fort was established to protect and control the Indians who were living on the Sebastian Indian Reservation, and to protect both the Indians and white settlers from raids by the Paiutes, Chemeheui, Mojave, and other Indian groups of the desert regions to the southeast. Fort Tejon was first garrisoned by the United States Army on August 10, 1854 and was abandoned ten years later on September 11, 1864.

There are restored adobes from the original fort and the park’s museum features exhibits on army life and local history. The park also has a number of beautiful 400 year-old Valley Oak trees.

The park is approximately 76 miles northwest of Los Angeles along the "Grapevine" section of the I-5 freeway, via the Fort Tejon exit (Exit 210 heading north or south).

Seasons/Climate/Recommended Clothing
The weather can be changeable. Layered clothing is recommended.

Experience frontier California life of the 1850s and 1860s 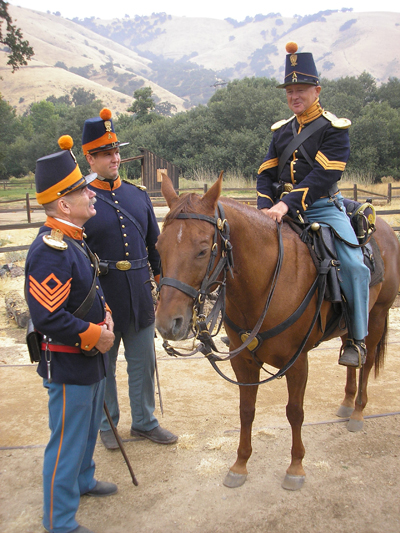 Talk with soldiers who grumble about fatigue details. Visit the blacksmith at his forge, the carpenter in his shop, or the soldiers in the barracks. Servants, cooks, officers, laundresses, and laborers are eager to share their stories with you.

Surround yourself with the sounds, sights and colors of the past. Smell and hear the bubbling stew simmering over an open hearth fire place. Hear the musketoons fire, the blast of the cannon, and see clothing of the era. You can witness women mending clothes, soldiers polishing brass, people stomping around in the adobe brick pit, cooks churning butter or children playing a game of graces.

Come take a step back in time and join with the men, women and children of Fort Tejon. Relive a day out of the past. These Living History demonstrations take place on the first Saturday of each month year around. At Fort Tejon visitors are always welcome and the modern world is checked at the gate.

The 1857 Fort Tejon earthquake was one of the greatest earthquakes ever recorded in the U.S. (Magnitude was about Mw 8.0). The earthquake left a surface rupture scar over 350 kilometers in length along the San Andreas fault. Despite the immense scale of this quake, only two people were reported killed by the effects of the shock.
For more information:
Southern California Earthquake Data Center
The Fort Tejon earthquake of 1857
http://scedc.caltech.edu/significant/forttejon1857.html

The following District Superintendent Orders have been implemented:

You can schedule a virtual PORTS program of Fort Tejon State Historic Park for your class.