Yes
Dogs are welcome at the park but not allowed on trails, in the river, on beaches, and must always be on a leash. 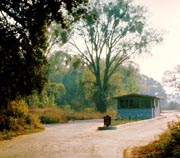