Bienvenido a las Fiestas Patrias in Old Town San Diego!  Fiestas Patrias are traditional celebrations of Mexican national pride, independence, and culture that take place both in Mexico, and across the United States.  These celebrations coincide with our National Hispanic Heritage Month, which is observed from September 15 to October 15 every year.

While there are five political holidays that typically make up Fiestas Patrias, the most famous is El Diez y Seis de Septiembre, also known as “El Grito de Dolores.”  It began in 1810 when Father Miguel Hidalgo y Costilla preached to his church goers in Dolores, Guanajuato, Mexico, that it was time to rise up and break free from Spanish rule.

Although Mexico officially won its independence from Spain on August 24, 1821, September 16th is still considered the original independence day.  The celebration traditionally starts just before midnight when a grito, or cry, for freedom is done to begin the festivities. The exclamation that is repeated every year “Mexicanos, viva México!” is in remembrance of the sacrifice that Father Hidalgo Costilla and his independence fighters made to start the revolution.

The main purpose of this event is to bolster a sense of national pride and unity among citizens of Mexico as well as Mexican Americans in the U.S.  For Mexican Americans, fiestas patrias have historically served to teach the community about Mexican history and culture, celebrate pride in their cultural roots, and claim a sense of place and empowerment in a society that has historically marginalized them.

While each community commemorates the occasion differently, here in Old Town we celebrate with music, dancing, living history activities, and more.  Though we’re disappointed we can’t celebrate together, we hope you enjoy this year’s Virtual Fiestas Patrias at Old Town San Diego State Historic Park.

"The most important Mexican Holiday, celebrated throughout the United States by Chicanos and Mexicanos, because it commemorates the start of the rebellion against Spain that eventually led to Mexico’s independence. Father Miguel Hidalgo y Costilla, triumphantly gave El Grito de Dolores, in the town of Dolores, Guanajuato, a cry for independence from Spain domination. The following year Hidalgo and several of his men were captured and beheaded, and their heads were placed on display. Ten years later, in 1821, Mexico gained its independence from Spain, but El Diez y Seis de Septiembre is still considered Mexico’s independence day. Chicanos continue to celebrate this holiday in the United States because they feel a part of Mexico, maybe not the political nation, but the Mexican culture. For more than 300 years Spain ruled territories that are now the states of California, New Mexico, Arizona, Colorado, and Texas. After 1821 a Mexican government ruled this territory for twenty-seven years, and the American Occupation, as it is called in the Southwest, began in 1848 after the U.S.-Mexican War of 1846-1848. It was possible in one person’s lifetime to have been a citizen of Spain, Mexico, and the United States. Yet because of the Spanish language, the Catholic religion, and the culture, many Mexican Americans continued to maintain allegiance to the Mexican nation. Celebrating El Diez y Seis de Septiembre is one of the ways this allegiance is expressed.

In many parts of the Southwest, especially Texas, this celebration is referred to as one of  Las Fiestas Patrias and has been celebrated there since the 1830s. Typically the celebration consists of parades, the election of a queen, fairs, food, lots of music, and an evening dance. It is a tradition that at midnight on the night of September 15, el grito de independencia is yelled. In Mexico City the president of the country carries out this custom on the balcony of the presidential palace, but in the United States el grito may be shouted throughout the day.

One of the first Chicano journals to be published at the beginning of the Chicano movement was titled El Grito: A Journal of Contemporary Mexican American Thought, published in Berkeley in 1967 by Dr. Octavio Paz. Later there were many other periodicals with similar titles, such as El Grito del Norte, El Grito del Pueblo and  El Grto de Aztlán. All these titles allude to a cry for independence, and for Chicanos in the United States a cry for self-determination."

Excerpt from Rafaela G. Castro, Chicano Folklore: A Guide to the Folktales, Traditions, Rituals and Religious Practices of Mexican Americans

Interested in learning more about the cultural significance of Fiestas Patrias?  While this list is in no way comprehensive, it is a great place to get started.

This introductory article describes the five political events that make up “Fiestas Patrias” as well as the origin of the Cinco the Mayo celebrations.

This Spanish-language article on the origins of Fiesta Patrias is easily translated via Google Translate for English speakers. The article explains that while Fiestas Patrias was originally a religious event, its festive nature was added later to bolster national identity and a sense of unity.

This website gives an excellent overview of the "most important people, events, and ideas that have been contributed to our regional history by native peoples, Spaniards, Mexicans, and Chicanos."

Did you know that barrio is a term for a Chicano neighborhood, and that some of the oldest barrios can be found in major U.S. cities, like Los Angeles, Chicago, El Paso, and San Antonio? Or that menudo is actually a soup-type dish made with tripe, the stomach lining of a cow, and typically eaten early in the morning after big holiday celebrations to cure a hangover?

Chicano Folklore is replete with such interesting and often surprising facts about Mexican American culture. Even before the United States-Mexican War in 1848, when 80,000 Spanish-Mexican-Indian people suddenly became inhabitants of the United States, people of Spanish and Mexican descent had a rich and unique culture in what is now the American southwest. Understanding Chicano folklore, or the customs, rituals, and traditional cultural forms that Mexican Americans share, is extremely significant to comprehending the Chicano experience. Chicano Folklore is the first reference book to focus wholly on this subject. From burrito (literally little burro or little donkey) to zoot suit (a style of suit worn by Mexican Americans, African Americans, and Filipino Americans during the 1930s and 1940s), the dictionary's more than 225 in-depth passages thoroughly explain the meaning and background of each cultural term. We learn about the music, religious practices, food, and key historical and mythical figures that make Chicano folklore so vibrant.

The detailed, immensely informative passages of Chicano Folklore will entertain and educate anyone interested in understanding Chicano culture and the colorful impact it has had on America as a whole.

Chapter 3 (titled “Village Culture, Lifestyle, and Organization”) discusses the community preparation needed to have a successful Fiesta Patrias celebration. While selling tickets, building floats, and preparing food were among important aspects of the event, it was also an important opportunity for community leaders to seize the political moment to bolster support for their communities. 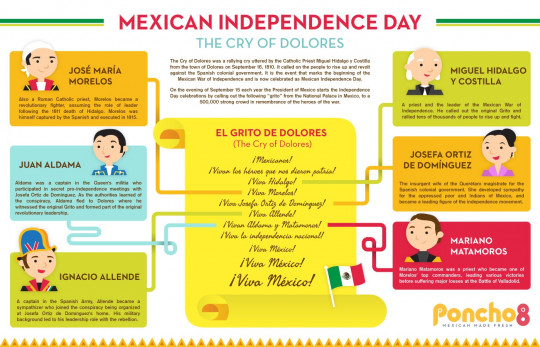 This Spanish-language video gives a brief overview of Mexican history, leading up to the fight for independence.

This English-language video gives a brief overview of Mexican history, leading up to the fight for independence. It features various entertaining examples of gritos, from modern Mexicans and Mexican Americans to vintage movie clips.

This two-part learning lesson encourages both reading comprehension and creative writing. After reading a page on the history of the Independence of Mexico, students are given a prompt to take the information that they read, plus the interpretation they made from the pictures, and create a short historical fiction account. It can be amusing with their own opinions but must include accurate facts of the event. A grading rubric is included for teachers.

Grades 3-6: Story of the Liberation of México: El Grito! Written and Illustrated by the Students of Solano Avenue School, Music by Lalo Guerrero

A fun, artistic assignment  for children is writing a corrido. A corrido is a type of Mexican poetry that became popular during revolutionary times, and remains in practice today. They are stories, usually about struggle or oppression, that are in the style of musical ballads. Story of the Liberation of México: El Grito! features student samples of corridos based on the popular book, El Grito!  Teachers can use this booklet as an example of a project to do with their class.

Grades 6-8: Mexican Culture and History through Its National Holidays (EDSITEment)

A Note of Thanks

While we are extremely grateful for all of the historians and others who have dedicated their time creating these valuable resources, we would like to extend our personal thanks to historian Steven Moreno-Terrill, Professor of Chicana/o Studies, San Diego Mesa and MiraCosta Colleges, for sharing his expertise during the creation of the 2020 and 2021 Fiestas Patrias virtual events. Thank you, Professor Moreno-Terrill!