The historic zones of China Camp State Park are vulnerable to any potential rise in sea level created by Global Climate Change. Cultural Resources throughout the California State Parks system are being threatened from the effects of the climate change that is already underway.

As the climate is disrupted by human activities, scientists feel that winter storms are likely to become more frequent and powerful. Wildfires, often projected to occur in conjunction with climate change, will increase the potential threat to museums and their artifacts, as well as cultural landscapes, historic structures, and prehistoric sites and features. State Parks along California's coastlines could see the effects of a projected rise in the level of the oceans, subsequently affecting archaeological sites located near the shore. In 2008, California Governor Arnold Schwarzenegger issued an Executive Order directing state agencies to plan for Global Climate Change issues like sea level rise. Read Governor's Executive Order


Acquired by the State in 1977, China Camp State Park is one of the least disturbed natural watersheds remaining along the shores of San Pablo Bay. China Camp State Park is located on the southwest shore of San Pablo Bay, three miles from downtown San Rafael in Marin County. China Camp has a natural watershed along the shores of San Francisco Bay. Features include meadow and oak habitats that are home to a variety of wildlife, including deer, squirrels and numerous birds, as well as extensive inter-tidal marshes.

Historical significance of the prehistory and history of China Camp is an important dimension to the park. What is now called Point San Pedro was originally part of Coast Miwok territory. The Coast Miwok made baskets and clamshell disk beads, and traded them for such locally unobtainable resources as high-grade obsidian from Lake County tribes. Their China Camp village site probably consisted of ten or twelve households, with eight to ten individuals living in each. The remains of numerous archaeological sites have been found in the park. Houses were built of grass and tule thatching over a dome framework of small poles.

A Chinese shrimp-fishing village thrived on this site in the 1880s. Nearly 500 people, originally from Canton, China, lived in the village. In its heyday, there were three general stores, a marine supply store and a barber shop.  The Chinese, like many other immigrant groups, came to California with the prospect of mining. There were three general stores, a marine supply store and a barbershop.  Currently the Chinese fishing village consists of the remains of a few buildings along the water's edge, with only fragments of foundations. Several historic structures have been preserved, and an informative museum exhibit makes it easy for visitors to imagine a way of life that has been generally forgotten in California history. The settlers were fisherman by trade in their native country. Over 90% of the shrimp they netted were dried and shipped to China or Chinese communities throughout the United States.

Since several of the historic structures have been preserved, their location along the water's edge is leading cultural preservationists, archaeologists, and historians to begin a re-evaluation of historic building planning policy guidance. Should California State Parks change historic building rules to allow for climate change?

Sarah Staniforth, the historic properties director at the National Trust in the United Kingdom, has indicated such changes are necessary. "Refreshed guidance should explicitly refer to historic buildings in the context of mitigating against and adapting to climate change. This will make it easier to make essential changes to historic buildings: to make them more resilient to climate changes," states Staniforth. "Improved guidance will also make the process more consistent. At present, attitudes on how to deal with historic buildings differ from one local authority to another." Go to United Kingdom National Trust Website 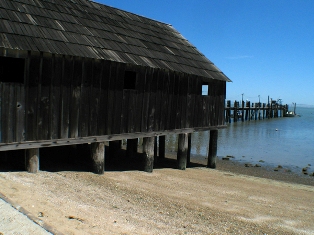 Cultural resource professionals agree that we shouldn't alter appearance of historic structure like the China Camp buildings, but traditional materials can be re-used with changes to capacity or design.

Making sympathetic changes to historic buildings is ultimately the lesser of two evils. Without improved resilience, the fabric, and sometimes the priceless contents, could be seriously compromised.

The extent that these impacts from adaptive responses will affect the resources at China Camp is one of the primary issues that State Parks resource managers are working on. The San Francisco Bay Commission on Development Commission (BCDC) has developed sea level rise models that show the urgency of addressing the preservation of China Camp's water front historic structures. Go to BCDC Website

Primary among the major concerns that will need to be addressed at China Camp are the following:

New flood defenses, particularly in historic towns, which can cause major archaeological damage along historic waterfronts and may impair the character of historic waterside buildings. Additionally, the design integrity of some historic buildings and landscapes could be damaged by the need to provide new and more effective preservation, up to and including relocation of the buildings to higher ground.