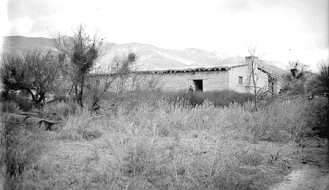 There was no time to be lost on the Overland Mail Company line. John Butterfield gave specific instructions to his employees in 1858 about keeping to the schedule.This Schedule may not be exact—Superintendents, Agents, Station-men, Conductors, Drivers and all employees are particularly directed to use every possible exertion to get the Stages through in quick time, even though they may be ahead of this time.

If they are behind this time, it will be necessary to urge the animals on to the highest speed that they can be driven without injury.

On the contrary, if each driver gains that amount of time, it leaves a margin of time against accidents and extra delays. All hands will see the great necessity of promptness and dispatch: every minute of time is valuable as the Company are under heavy forfeit if the mail is behind time. Conductors must note the hour and date of departure from Stations, the causes of delay, if any, and all particulars. They must also report the same fully to their respective Superintendents. 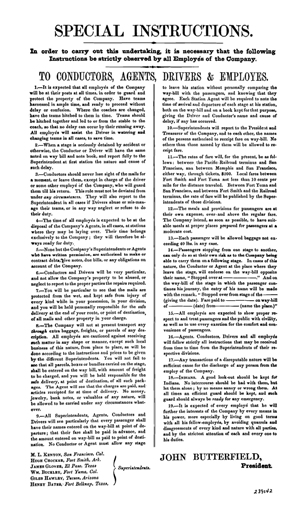 When a mile or two from a scheduled stop, stage conductors blew a small brass bugle or trumpet to alert the station staff of the impending arrival. When close to the station, another long blast of the horn was sounded. The first call told a station keeper it was time to prepare meals for incoming the passengers and to ready a fresh team for the stage. The second marked the stage’s arrival.

There were two types of way stations—home and swing stations. Usually ten minutes was all that was needed at a swing station to exchange teams and to allow passengers a moment to stretch before the stage was on its way.

The overland stage stops Mark Twain described on the central overland route in the 1860s were operated for service, not comfort.

The station buildings were long, low huts, made of sun-dried, mud-colored bricks, laid up without mortar (adobes, the Spaniards call these brick, and Americans shorten it to “’dobies”). The roofs, which had no slant to them worth speaking of, were thatched and then sodded or covered with a thick layer of earth, and from this sprang a pretty rank growth of weeds and grass. It was the first time we had ever seen a man’s front yard on top of his hours. The buildings consisted of barns, stable-room for twelve or fifteen horses, and a hut for an eating-room for passengers. This latter had bunks in it for the station-keeper and a hostler or two. You could rest your elbow on its eaves, and you had to bend in order to get in at the door. In place of a window there was a square hole about large enough for a man to crawl through, but this had no glass in it. There was no flooring, but the ground was packed hard. There was no stove, but the fire-place served all needful purposes. There were no shelves, no cupboards, no closets. In a corner stood an open sack of four, and nestling against its base were a couple of black and venerable tin coffee-pots, a tin teapot, a little bag of salt, and a side of bacon.

By the door of the station-keeper’s den, outside, was a tin wash-basin, on the ground. Near it was a pail of water and a piece of yellow bar soap, and from the eaves hung a hoary blue woolen shirt, significantly—but this latter was the station-keeper’s private towel, and only two persons in all the party might venture to use it—the stage-driver and the conductor. The latter would not, from a sense of decency; the former would not, because he did not choose to encourage the advances of a station-keeper… 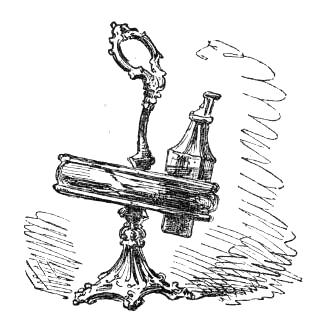 The furniture of the hut was neither gorgeous nor much in the way. The rocking-chairs and sofas were not present, and never had been, but they were represented by two three-legged stools, a pine-board bench four feet long, and two empty candle-boxes. The table was a greasy board on stilts, and the table-cloth and napkins had not come—and they were not looking for them, either. A battered tin platter, a knife and fork, and a ware saucer that had seen better days… There was one isolated piece of table furniture that bore about it a touching air of grandeur in misfortune. This was the caster.

It was German silver, and crippled and rusty, but it was so preposterously out of place there that it was suggestive of a tattered exiled king among barbarians, and the majesty of its native position compelled respect even in its degradation. (1)

At home stations, travelers had time for a hasty meal. Food varied greatly from station to station. Chicory coffee sweetened with molasses or brown sugar, hot biscuits, fried pork floating in grease, and corn bread were described in one account. (2)   At a way station in West Texas in 1858, Waterman L. Ormsby breakfasted on jerked beef cooked on buffalo chips, along with raw onions, slightly wormy crackers, and a bit of bacon. (3)   He stated

…the fare, though rough, is better than could be expected so far from civilized districts. It consists of bread, tea, and fried steaks of bacon, venison, antelope, or mule flesh—the latter though tough enough. Milk, butter, vegetables were only met with towards the two ends of the trip. (4)

One traveler, English writer William Tallack, described his experience in 1860 at a way station in Southern California:

The Tejon station was a store kept by a dry sort of Yankee, who, after moving about very leisurely, and scarcely deigning to answer any questions put him, set before us a supper of goat’s flesh and coffee.  (5)

Mark Twain and his brother Orion Clemens dined even less satisfactorily at one station in the early 1860s. He wrote about it in his book, Roughing It: 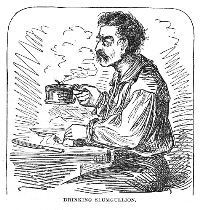 The station-keeper up-ended a disk of last week’s bread, of the shape and size of an old-time cheese, and carved some slabs from it which were as good as Nicolson pavement, and tenderer.

He sliced off a piece of bacon for each man, but only the experienced old hands made out to eat it, for it was condemned army bacon which the United States would not feed to its soldiers in the forts, and the stage company had bought it cheap for the sustenance of their passengers and employés. We may have found this condemned army bacon further out on the plains than the section I am locating it in, but we found it—there is no gainsaying that.

Then he poured for us a beverage which he called “Slumgullion,” and it is hard to think he was not inspired when he named it. It really pretended to be tea, but there was too much dish-rag, and sand, and old bacon-rind in it to deceive the intelligent traveler. He had no sugar and no milk—not even a spoon to stir the ingredients with. We could not eat the bread or the meat, nor drink the “slumgullion.” (6)