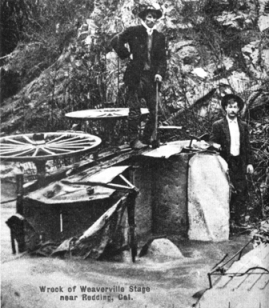 …[Major Benjamin C.] Truman… told about William Clift, who in 1868, out on the “Coastal route,” drove out of Los Angeles on the coast line for San Francisco, with Truman at his side. They were presently held up by hooded highwaymen. The Sheriff of San Diego County, James McCoy, helped to round up the men who had spent nearly their whole take in one week. The men were sentenced to ten years in San Quentin. Truman says that when Fred Ames, one of the culprits received his sentence, he sent word to the Judge that he would play him a game of “seven-up” to see whether he would make it twenty years or nothing!

On another occasion Truman wrote of the coastal route between Los Angeles and San Diego where in 1878, George H. Smith, or “Smithy” was driving between Santa Ana and Las Flores. About 11 o’clock one evening a highwayman attempted to hold him up near San Juan Capistrano. Truman said that Smith cut the leaders with his whip and gave the wheelers a sharp word. The robber fired a bullet which cut through Smithy’s left hand wounding him severely. Judge Richard Egan was the only passenger; and up to this time since they had left Santa Ana, he had been curled up asleep on the inside back seat.

The words and gunfire awoke the “Oracle of Capistrano,” who opened the right-hand door of the vehicle and climbed up to take the reins from the wounded driver. According to Truman, Egan had had credit for performing various kinds of work in his life and for doing all sorts of things which he had undertaken, but that this was his first effort at driving a horse mail coach. The Judge made a stop at Capistrano, let the wounded driver off, drove on to Las Flores, where he tendered his resignation.  (1)

John Butterfield advised his passengers at the start of their overland stage travel with a poster:

Drivers, conductors and passengers nervously kept their weapons ready for any situation that might arise. On his 1858 trip, Waterman Ormsby found quite a different reception.

The stage frequently passed Native Americans. Not only in their villages at San Felipe, Vallecito, and Fort Yuma, but also along the road “crossing the desert on foot, carrying their water gourds… these did us no more harm than to make faces at us and grin as our horses shied from them. I found the journey quite unpleasant in the wagons; but they seemed to enjoy the walk, as if used to it.” Emigrant trains were also a common sight with “many cattle and oxen dying on the desert from want of water,” as they had in 1849 and 50.  (3) 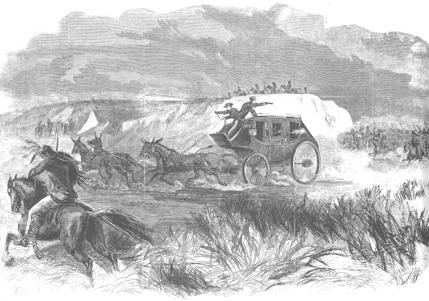 The Butterfield Overland Dispatch coach under attack in 1866.
Published by Harper's Weekly on April 21, 1866. 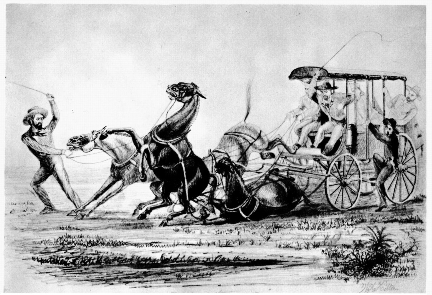 From: “A Ride on a Butterfield Stagecoach” in The Butterfield Trail and Overland Mail Company in Arizona, 1858-1861, Gerald T. Ahnert, Canasota Publishing Company.  Email Gerald Ahnert

However, concerns were particularly high when traveling through the Mescalero Apache country of West Texas and the Chiricahua Apache regions in Southern New Mexico and Arizona. The San Diego Union of March 16, 1871, reported an attack by Indians on the stage and of a raid on Gila Bend. The Apaches, while stealing horses from the corral, were frightened off by the sound of noises from within the station. The newspaper reported that Apaches had raided the stage company stock in March 1871, in March 1872, and on numerous other occasions. (4)

H.D. Barrows, who traveled across southern Arizona by stage en route to Missouri in late 1860 reflected at the end of his journey:

To many people, doubtless, who think more of their ease than they do of robust physical health, a stage ride of a thousand or two thousand miles, may seem a very formidable undertaking. But for those who had a liking for adventure, and a desire to see something of the world, a long ride of two or three weeks, practically in the open air, not in hot, stuffy cars, possesses a wonderful charm, especially in remembrance… (5)