Salton Sea Recreation Area: From the New Deal to a Great Deal

From the New Deal to a Great Deal:
The CCC Then and Now

The original Civilian Conservation Corps helped to solve the country’s unemployment problems during the Great Depression.  Congress stopped funding the CCC in the early 40’s when the country entered World War II.  The CCC’s legacy lives on, however, with the California Conservation Corps, which was created in 1976 by Governor Jerry Brown.

The California Conservation Corps, modeled on the original CCC as an employment and an environmental conservation program, offers young men and women a life-changing opportunity.  As CCC crewmembers, they learn both job and interpersonal skills that increase their ability to make a living and a good life for themselves.

Today the California Conservation Corps maintains a strong connection to California State Parks.  Recently, a San Diego-based crew of 11 members completed a massive project in only a week at the Salton Sea State Recreation Area.  The Bombay Beach section of the SRA had been plagued by illegal off-road vehicle use and constant damage by cars and RV’s getting stuck in the sand.  In order to protect the area’s natural resources and state park visitors, the CCC crew restored the salt flat and constructed a vehicle barrier to prevent further damage.  A similar project is planned for the Salt Creek area in the near future. 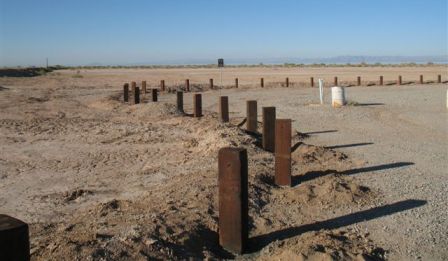 The CCC crew, led by Rogelio Ramos out of San Diego, did a fantastic job in temperatures in excess of 110F! They reported at 5:30 AM and worked until 1:30 PM. In the evenings they loaded up their gear for the following day. Despite the heat and horse flies the size of small hummingbirds, the crew persevered with great attitude. They just kept moving their shade structure over the work area and kept on keeping on.

Back when I was in the CCC as a corps member (reaching way back to 1984) the motto was “hard work, low pay and miserable conditions”. In fact, we used to chant that slogan. But, the corps members of today say they can’t say that anymore. However, they all smiled when I said it and we nodded to each other in knowing the truth in that former disclosure. 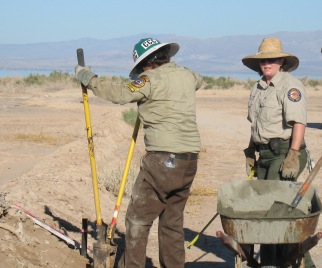 The C’s have been involved on many projects in the Salton Sea area, including removing non-native Tamarisk and planting native plants at Dos Palmas.

The maintenance crew at the Salton Sea State Recreation Area has strong personal ties to the California Conservation Corps.  Both Maintenance Chief Linda Stonestreet and Park Maintenance Assistant Lynn Jamerson began their careers in the CCC. Their experiences as CCC crew members helped them get into careers with California State Parks.