Days after becoming the 32nd President of the United States, Roosevelt outlined plans to put young men to work in the nation’s forests, parks, and range lands. He called it the Emergency Conservation Work program, but it soon became known as the CCC – the Civilian Conservation Corps.  Of all the "New Deal" programs, the CCC was the most popular. It accomplished two important goals – preservation of the nation’s natural resources and its human resources. 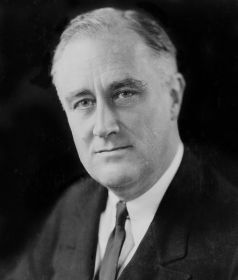 I welcome the opportunity to extend, through the medium of the columns of Happy Days*, a greeting to the men who constitute the Civilian Conservation

Corps.  Congratulations are due those responsible for the successful accomplishment of the gigantic task of creating the camps, arranging for the enlistments and launching the greatest peacetime movement this country has ever seen.

It is my belief that what is being accomplished will conserve our natural resources, create future national wealth and prove of moral and spiritual value not only to those of you who are taking part, but to the rest of the country as well.

You young men who are enrolled in this work are to be congratulated as well. It is my honest conviction that what you are doing in the way of constructive service will bring to you, personally and individually, returns the value of which it is difficult to estimate. Physically fit, as demonstrated by the examinations you took before entering the camps, the clean life and hard work in which you are engaged cannot fail to help your physical condition and you should emerge from this experience strong and rugged and ready for a reentrance into the ranks of industry, better equipped than before.

Opportunities for employment in work for which individually you are best suited are increasing daily and you should emerge from this experience splendidly equipped for the competitive fields of endeavor which always mark the industrial life of America.

I want to congratulate you on the opportunity you have and to express to you my appreciation for the hearty cooperation which you have given this movement which is so vital a step in the Nation's fight against the depression and to wish you all a pleasant, wholesome and constructively helpful stay in the woods.  (July 8, 1933)