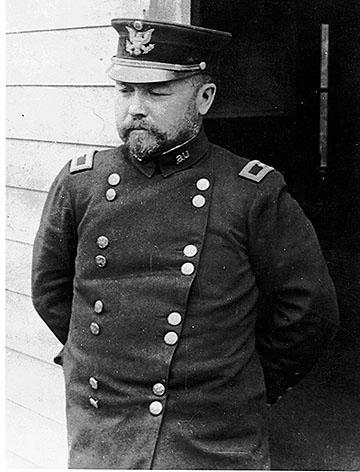 On April 18, 1906, Brigadier General Frederick Funston was in command of the Presidio in San Francisco.

The severity of the earthquake destroyed the center of the city, and over 300,000 people were left homeless.

He was instrumental in the establishment of communications, sanitation, medical facilities, housing and reestablishing general order to a destroyed city.

General Funston was regarded as a national hero,
and the media of the time called him
"The man who saved San Francisco."

How The Army Worked To Save San Francisco

How lucky it was for San Francisco that Gen. Frederick Funston threw himself and his men so boldly into the breach when the fire-fighters were waging their unequal combat with the flames caused by the great earthquake of April 18th, has been remarked on every hand.

The newspapers and weekly periodicals have covered the ground of the great catastrophe so far as general description goes, but the Cosmopolitan Magazine  had been singularly fortunate in securing from General Funston the following and spirited account of how he summoned his men from the Presidio, how they dashed down to the scene of the conflagration to help the firemen, to patrol the city, to save lives, to care for the wounded and to feed the hungry, and of their subsequent deeds.

Modesty is written on every page of this report. General Funston gives a fine account of what he saw at the beginning of the catastrophe: he tells how the policing-squads were organized, and gives much valuable information not before set forth. But as to how heroically he and his men worked in the vain fight to save the city with dynamite, he is silent, and of the numberless instances of lives saved and hungry mouths fed he makes little account. In this respect he is like Kipling's heroic soldier -- "he has done the fighting, but he can't tell about it."  Still the narrative stands as a unique contribution to the history of the great disaster, and is vitally interesting throughout.

Click Here To Read General Funston's Entire 1906 Report About
"How The Army Worked To Save San Francisco (27.1kb)"