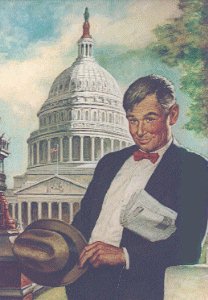 Will Rogers was born on November 4th in 1879.  Let's all remember that old cowboy and what he gave to this country.

Some lesser known quotes from Will:

3)     The quickest way to double your money
is to fold it and put it back in your pocket.

4)     There are three kinds of men:
The ones that learn by reading.
The few who learn by observation.
The rest of them have to touch an electric fence.

6)      If you’re riding’ ahead of the herd, take a look back every now and then
to make sure it’s still there.

8)     There are two theories to arguing with women….neither work. 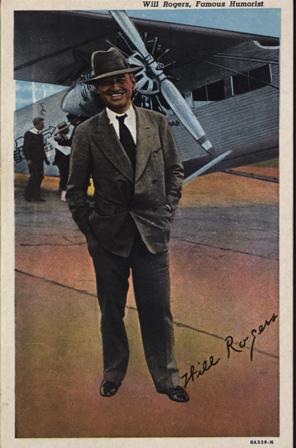 Will had an article about growing old and he listed:

First-  Eventually you reach a point when you stop lying about your age and start bragging about it.

Second-  The older we get, the fewer things seem worth waiting for.

Third-  Some people try to turn back to odometers.   Not me, I want people to know “why” I look this way.   I’ve traveled a long way and some of the roads weren’t paved.

Fourth-  When you are dissatisfied and would like to go back to youth, think Algebra.

Fifth-  You know you are getting old when everything either dries up or leaks.

Sixth-  I don’t know how I got over the hill without getting to the top.

Seventh-  One of the many things no one tells you about aging is that it is such a nice change from being young.

Eighth-  One must wait until the evening to see how splendid the day has been.

Ninth-  Being young is beautiful, but being old is comfortable.

Tenth-  Long ago when men cursed and beat the ground with sticks, it was called witchcraft.   Today it’s called golf.

They may call me a 'rube' and a 'hick,' but I'd a lot rather be the man who
bought the Brooklyn Bridge than the man who sold it.

No nation in the history of the world was ever sitting as pretty. If we want
anything, all we have to do is go and buy it on credit.

So that leaves us without any economic problems whatsoever, except perhaps
some day to have to pay for them.

We'll show the world we are prosperous, even if we have to go broke to do it.

We will never get anywhere with our finances till we pass a law saying that
every time we appropriate something we got to pass another bill along with it
stating where the money is coming from.

One way to solve the traffic problem would be to keep all the cars that are
not paid for off the streets. Children could use the streets for playgrounds
then.

You know horses are smarter than people. You never heard of a horse going
broke betting on people.

The average life of the movie is till it reaches the critic.

The average life of the movie hero is till he is found out.

The funnies occupy four pages of the paper and editorials two columns. That
proves that merit will tell.

Keeping mighty close to home, riding the old Ponies out in the hills and
looking Nature over and seeing how it was making out during the long spell of
Republicanism.

It just looks like everything is doing fine but humans. Animals are having a
great year, grass was never higher, flowers were never more in bloom, trees
are throwing out an abundance of shade for us to loaf under. Everything the
Lord has a hand in is going great, but the minute you notice anything that is in
any way under the supervision of man, why it's 'cockeyed.

You must judge a man's greatness by how much he will be missed.