The "pioneer cabin" at Andrew Molera State Park on the Big Sur coast, once part of the El Sur land grant, has long been an object of historical interest and romantic reflection. This three-room structure was built of hand-hewn redwood logs with lap-jointed and pegged corners, and roofed with hand-split redwood shingles. Its construction date has, until now, been a matter of speculation. Historical documents have indicated that a succession of structures was built on the rancho starting from its earliest days, and specifications for more than one of these appeared to correspond reasonably well with the existing cabin. However, thanks to modern scientific techniques, the cabin's construction date can be fixed with certainty, down to a two-month period in a long-ago springtime. 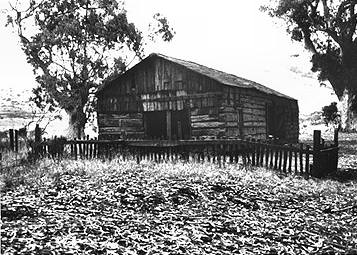 The Cooper Cabin, in 1888, remains an attraction for history enthusiasts.

The El Sur grant was made in 1834 by Governor Jose Figueroa to Juan Bautista Alvardo. The grant was for two leagues of land, or roughly 8,880 acres. The expedient filed by Alvarado on May 14, 1834 stated that he had first petitioned for a provisional grant on August 12, 1830, and repeated his petition on February 26, 1831. It further asserted that he maintained "at this time . . . more than three hundred head of large cattle and nearly an (sic) hundred horses, all my own property, and have built a house and pens." [1]

Soon after the grant was made, the property was acquired by Captain J.B.R. Cooper, Alvarado's uncle by marriage. Although no official transfer was made until 1840, Cooper seems to have been directly involved in the management of the ranch as early as 1834, when he entered into an agreement with Job Dye for the latter to raise mules on the property.

This contract, dated June 16, 1834, referred to "his (Cooper's) farm called the Sur (about 30 miles from Monterey)," and arranged for Dye, a Kentuckian who had arrived in California in 1832, to breed mules from the mares and jackasses already on the place. It further called for Dye to construct "a well built log house with shingled roof, the body to be at least fifteen yards long and five and a half yards wide." Cooper was to provide the tools and "let the men that are in this employ on said farm assist . . . Dye in building (the) dwelling". He was also to pay Dye one hundred dollars for this work, with Dye to receive further recompense "should said men in said Cooper's employ not do their part in building said house."  [2]

Though there is no proof that the structure was built as specified, the duration of Dye's stay makes it likely that a dwelling was constructed. Furthermore, the dimensions of 15 yards by 4-1/2 yards match closely those of the pioneer cabin, which measures 45.66 feet long by 20.5 feet wide. If this were the cabin still in existence on the Big Sur River, it would clearly be the earliest log structure in all of California.

But there were other candidates: in 1851, Cooper entered into another contract that called for the construction of a dwelling. The lessees, Robert Fisher, Jose Maria Smith, and Manual Smith were to build a

good and Substantial house (emphasis added) of adobes to have a stone foundation three feet in depth the house to contain two rooms sixteen feet square with a passage way between of the width of eight feet, Story to be nine feet high, the walls to be twelve feet high from the stone foundation to the floor, and the under part of the loft floor to be planed, the house well finished with doors and windows and covered with shingles. [3]

This structure seemed less likely to be the current cabin, but since adobe was cited only as a building material option, it could not be ruled out altogether. Yet another possibility was the structure specified in a third contract, made on February 23, 1861, between Cooper and George Austin, for a house to be built on the "Sud Ranch." Austin, a native of Massachusetts who came to California in 1847 as a midshipman on the Independence, had a long record of employment with Cooper. [4] He served as a chairman on the U.S. Surveyor General's 1860 survey of the rancho, and later was employed as caretaker of Cooper's Monterey dwelling. [5] At the time of Cooper's death in 1872, Austin wrote to Cooper's widow, Encarnacion, that he "had lost the best friend (he) ever had in the world." [6] Austin's occupation was variously listed as laborer, constable, and farmer, in the 1860 and 1970 Monterey censuses and an 1875 county directory, respectively. [2] Austin's 1861 contract called for him to build a "block house" 46 feet long and 20 feet wide. It was to have three rooms, "the middle room to be one window to each room on the front and back of the house - and 2 doors - one at the front and one at the back of the middle room."[7] As noted above, the extant building measures 45.66 feet by 20.5 feet and has three rooms. The center room has interior dimensions of 19 by 19.5 feet; those on the ends measure 11 by 19 feet and 12 by 19 feet, respectively. The two side rooms have two windows each, one on the front and one on the rear, while the central room has a door on the front and a window on the rear.


Though no specific construction technique was indicated, the structure was clearly to be made of hewed logs and covered with shingles or clapboards. It is interesting to note that the use of lap jointed corners, also known as false corner-timbering, is common to the New England states, but is quite rare in the west. [8]

As was the case with the earlier cabin, there was no proof that his structure was built to these specifications, or indeed that it was built at all. However, a hand-written note, possibly by Andrew Molera, records the following information, which tends to associate the existing structure more closely with the 1861 construction date. [2] 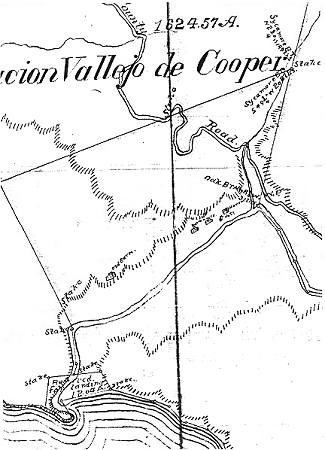 By 1904, the cabin had achieved a venerable age and was being popularly imbued with a fanciful and romantic past. In a Sunset Magazine article entitled "The Romance of the Spanish Grants," (ignoring the fact that the Rancho El Sur was a Mexican grant), author Mary Bell described the cabin:

. . . in one of the hushed places, the home-builder erected his dwelling from shafts of the sequoias. The stately spanish lady, his wife, never visited the house in the wilderness, but one can fancy that the captain planted the spreading rose-bush, which is still aflame with pink blossoms every month of the year, for Dona Encarnacion to enjoy. The house still stands, windowless and doorless, behind the long windbreak of eucalypts (sic) . . . [10]

The romance of the place has been in no way decreased by the revelation of its actual construction date. Retired forester Lester O. White, volunteering for the California Department of Parks and Recreation, took samples of five of the cabin's logs for tree-ring dating, using an increment borer and taking rubbings of exposed log ends. He then established a chronology of wet and dry weather cycles by taking samples from living redwoods in the area. With these data, he was able to establish that the logs were originally harvested in the spring of 1861, probably during the months of April and May, within two months of the signing of the contract between Captain Cooper and George Austin. There was no doubt as to this date, as consecutive drought years from 1857 to 1859 made the tree-ring sequence quite distinctive. Mr. White, who requires a rough time frame within which to work, had been told only that the cabin had been built sometime between 1825 and 1875.

Though the cabin is not the earliest log structure in the state, it is still clearly the earliest surviving structure on the south coast. Preservation efforts will be enhanced by the knowledge of exactly when and by whom it was built.