COLOMA, Calif.— California State Parks, the Locke Foundation and members of the Chinese American community celebrated the opening of the Gam Saan Trail on Friday, February 11, that connects Hennigsen Lotus Park in Lotus, CA with Marshall Gold Discovery State Historic Park. Gam Saan, meaning Gold Mountain in Cantonese, was the historical name given to the gold fields of California by Chinese forty-niners and miners.

“State Parks is honored to pay tribute to the Chinese miners who were a significant part of California’s gold rush era that saw the greatest voluntary migration of people in the world,” said California State Parks Director Armando Quintero. “Through our Reexamining Our Past Initiative, the department continues to understand and reveal the fuller histories of places such as Marshall Gold Discovery State Historic Park. As we develop and expand the stories of the many cultures that have contributed to the evolution of California, at State Parks, we continue to listen and share the voices that are the fabric of California.”

California State Parks and the Locke Foundation in partnerships with the County of El Dorado, the Chinese American Council of Sacramento, the American River Conservancy, the Chinese Benevolent Association of Stockton, the Gold Discovery Parks Association, and the Asian Pacific Islander American Public Affairs came together to honor and celebrate the Gam Saan Trail grand opening. Starting with a blessing of the 2.5-mile trail by the Venerable Ru Hsian, a Buddhist monk from the Fo Guang Shan Bodhi Temple in Sacramento, the ceremony included guest speakers from State Parks and represented Chinese organizations. Held on the 10th day of the Lunar New Year of the Water Tiger, the ceremony concluded with a ribbon-cutting and lion dancing to bring good luck, and honor and celebrate the past, present and future.

The land between the historic towns of Lotus and Coloma near the Gam Saan Trail have been used by many diverse populations through time, beginning with local Native American groups of the Nisenan, Maidu and Miwok people.

Through historic research, and a historical report completed in 1991 for a real estate sale in the area, it was revealed that a Chinese miner by the name of Toy Kee purchased a few acres near the project area in 1875 for a $55 gold coin. A few years later in 1881, the Lin Hing and Man Lee Companies purchased additional acreage and operated businesses, stores, a bank, and mining companies in the area from the 1870s through the early 1900s.

The lands purchased by these Chinese individuals served a greater purpose. Combined with the American River’s west flowing waters and a hillside facing towards the setting sun, the “feng shui” landscape elements important for directing the spirits of those that have passed was found. Many of the Chinese in early California feared that when they died, their spirits would not rest until their remains were buried in a proper grave in China. The property between Coloma and Lotus historically purchased by Chinese miners served to provide a path for the spirits, while temporarily holding the mortal remains of the deceased until they could be exhumed, packaged and sent home to China.

Once this historical land use was understood and shared with the local Chinese American communities, State Parks worked with the Locke Foundation and its partners to complete the Gam Saan Trail to honor everyone who contributed to the rich fabric of California’s history. 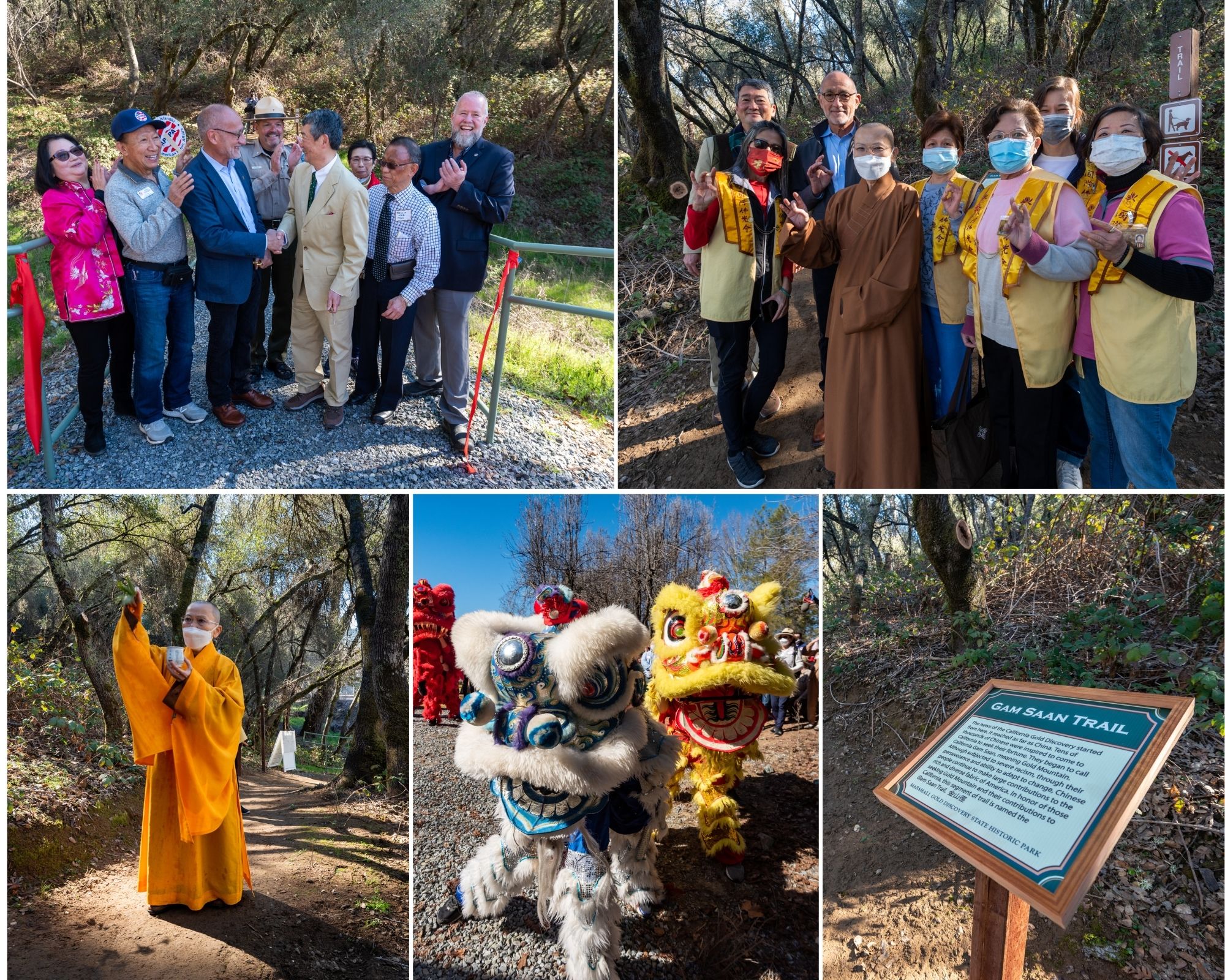 “News of the California Gold Discovery started in Coloma and reached as far as China. Tens of thousands of Chinese were inspired to come here to seek their fortune and began calling California Gam Saan, meaning Gold Mountain. Although subjected to severe racism, through their perseverance and ability to adapt to change, Chinese people continue to make contributions to the rich and diverse fabric of America. In honor of those seeking Gold Mountain, this trail segment is named the Gam Saan Trail.”