The park surrounds the town of Mendocino, just off Highway One.

In any season, a visit to the Mendocino Headlands will provide a memorable experience. You might come to see the spring wildflowers, enjoy a crisp and clear fall day, escape to a cool summer climate or witness the winter migration of grey whale. The park provides Mendocino with a buffer area that preserves the town's historical presence. In return, the town provides a view of a unique blend of natural, ecological, cultural and social diversity. Activities range from hiking and surfing to fishing. Photographers and painters frequently visit various parts of Mendocino Headlands enjoying and capturing the scenic wonders. There are no camping facilities; visitors are day users only. 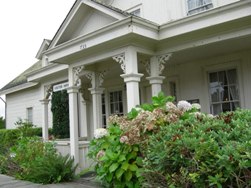 The Historic Ford House is a museum located on Main Street in Mendocino and is the Visitors Center for the Mendocino Headlands State Park. The Ford House provides current and historic information about to Mendocino visitors. It has a scale model exhibit of the Mendocino in 1890, built by local craftsman Len Peterson and the Museum offers a number of videos for viewing with topics ranging from the great migration of the gray whales to the steam whistle logging era of the early Twentieth Century. All videos are presented upon request and at no charge. Jerome B. Ford had the house built for his bride, Martha, in 1854. Ford was the superintendent of the first sawmill in Mendocino and is credited by many as being the founder of the city.

Exhibits at the Ford House carry the visitor back to another era. Throughout the house, are historic photographs, tools and relics that tell the story from the felling of the redwoods to the shipping of the lumber aboard the legendary doghole schooners. There is a small display of California Indian implements and seasonal exhibits on the local flora and fauna. Interpretive walks are led by docents and they also provide weekend lectures on area wildlife. The Mendocino Area Parks Association operates the Historic Ford House. 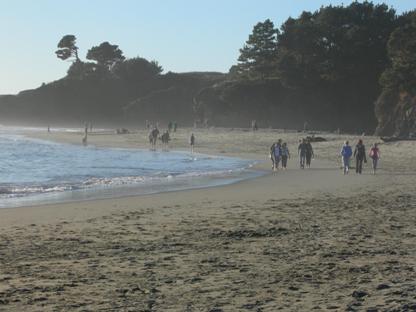 On the south side of Mendocino, accessible by vehicle from Highway 1, or by trails down the bluffs, is Big River Beach. This beach is used by picnickers, sun bathers and players in the surf. Mendocino Headlands State Park began operation in 1974. In 2002 the Big River wetlands was added to the park creating a 7,400-acre wildlife corridor which links diverse coastal and inland habitats into the largest piece of connected public land entirely within Mendocino County. Reaching from the Big River's mouth to 800-foot elevation inland ridges, the Big River wetlands includes a wide range of habitats. On the north it adjoins Jackson Demonstration State Forest and Mendocino Woodlands State Park. Public lands reach to the sea from Jackson Demonstration State Forest at Jug Handle State Reserve and Russian Gulch State Park. To the south, separated by a narrow strip of private land and Comptche Ukiah Road, lies Van Damme State Park with an RV campground and ocean access. Learn More about Big River Beach

The Headlands are also home to the Mendocino Music Festival. Held in July of each year, the Festival is over two decades old and is a magical blend of fine music by outstanding performers. Evenings include breathtaking concerts featuring the glorious Festival Orchestra, the popular Big Band concert, chamber music ensembles, dance, blues, jazz, world, and folk music. Days include chamber concerts at beautiful venues throughout Mendocino Village. Go to Festival Website.

Location/Directions
The park surrounds the town of Mendocino, California, just off Highway One.

Look for Whales at MacKerricher

Visitation is for Day Use only. The Headlands has no camping facilities.