California State Parks is completing the final phase of a barrier removal project from July-December 2016 at Leo Carrillo State Park to improve endangered steelhead trout habitat, beach access, and water quality. Pedestrian access to the beach and individual campsite reservations will not be affected during project construction.

During the project, construction will occur 7:30 a.m.-7:00 p.m., Monday-Friday. The project will remove two low-water “Arizona Crossings” and replace them with freespan bridges. Utilities will be relocated out of the floodway and year-round beach access will result.  Some construction noise may be heard.

Thank you for your patience and support while we strive to create an improved park for wildlife and people.

Other beaches in the area where more parking is available:

Sycamore Canyon: Day use hiking, mountain bike and equestrian.  Camping reservations through ReserveCalifornia.  Dogs on leash allowed in campground, but not on trails. 8 a.m.-Sunset daily. 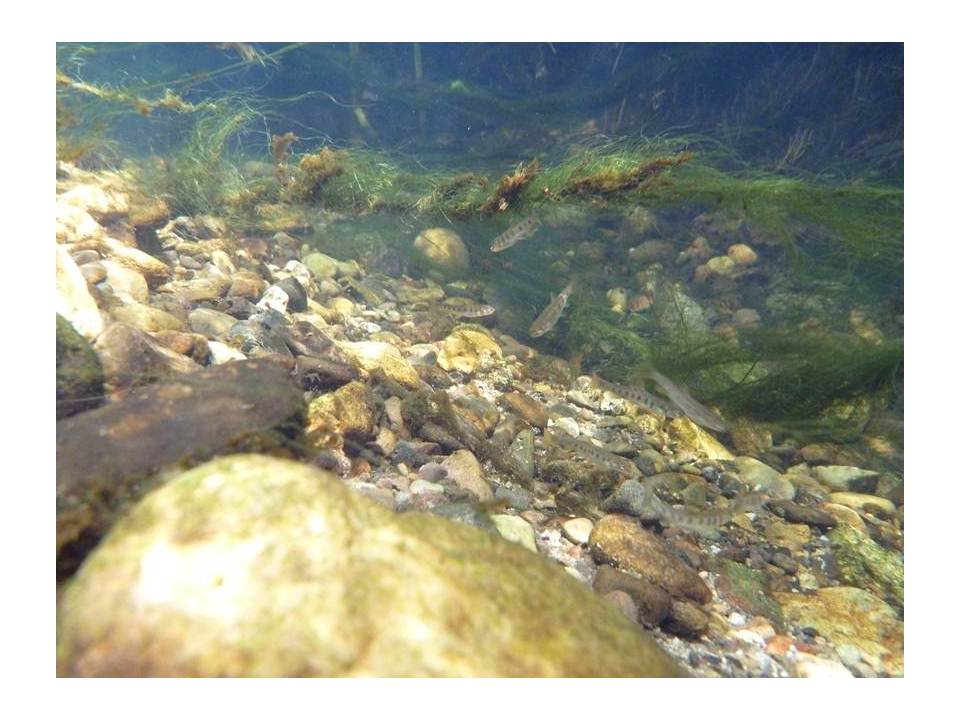 Southern California steelhead trout are a federally listed endangered species. They are also a California state listed Species of Special Concern. They are considered to be the most jeopardized of all populations within California (McEwan and Jackson 1996). School of young steelhead. Photo: RCDSMM Stream Team

Only a handful of clean streams remain for steelhead trout.

The Southern California Steelhead trout, Distinct Population Segment (DPS) are endangered and only found from the Santa Maria River in central California to the Mexican border. Historically, thousands of fish spawned each year throughout the streams in the Santa Monica Mountains. Today only three streams, Arroyo Sequit, Malibu, and Topanga creeks, are known to contain steelhead trout, and their numbers are few.

This project will allow steelhead to reconnect with 4½ miles of historic habitat within the Arroyo Sequit Creek watershed by removing two existing road crossings that block steelhead migration and replacing them with freespan bridges.

Work can only begin in the summer when the creek is dry.

California State Parks protects and preserves unique natural resources. When projects are planned, they must follow state and federal laws, and are designed and implemented to avoid and minimize harm to the environment.

Arroyo Sequit Creek is the “cleanest of the clean" in terms of water quality and is habitat for other sensitive species, such as California newt. Work is only allowed to occur when the creek is dry during the summer and fall. This project is starting in late summer to minimize overlap with the bird nesting season, and therefore, potential disturbance to nesting birds and their fragile young.

Although there will be short-term inconveniences associated with this project, they are outweighed by the significant long term-benefits to fisheries restoration, improved public access, and water quality. 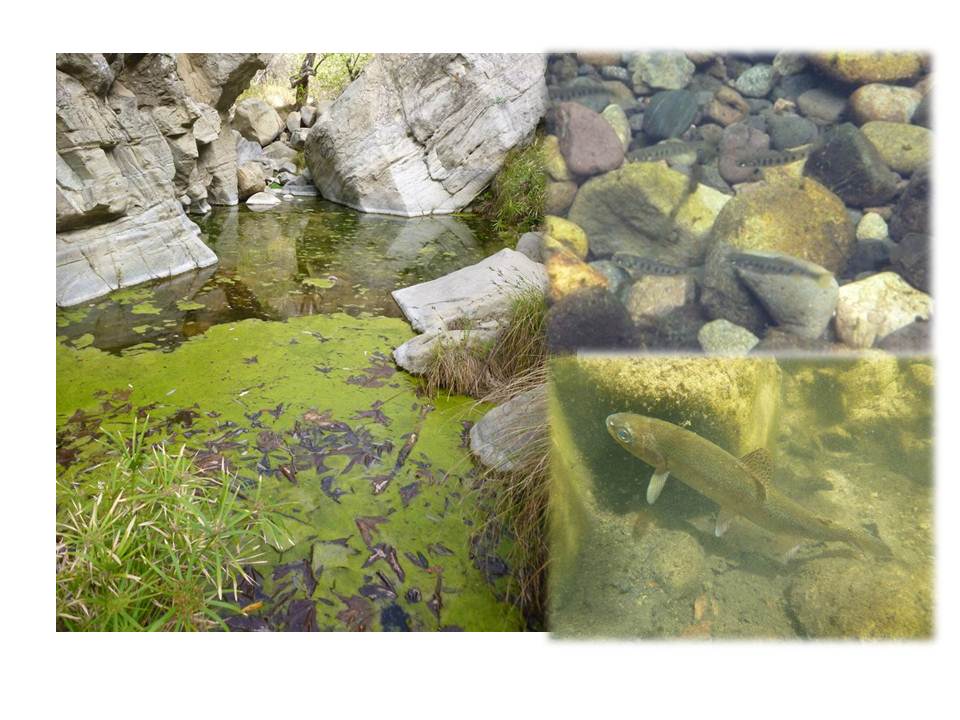 Southern California steelhead have lost habitat everywhere, so it is imperative to regain access to quality historic habitat, such as is found in Arroyo Sequit Creek. Only two other creeks host steelhead in the Santa Monica Mountains, Topanga and Malibu creeks. Left: Perennial pools in Arroyo Sequit Creek are key to steelhead survival. Right: Young “fry” and adult steelhead. Photo: RCDSMM Stream Team 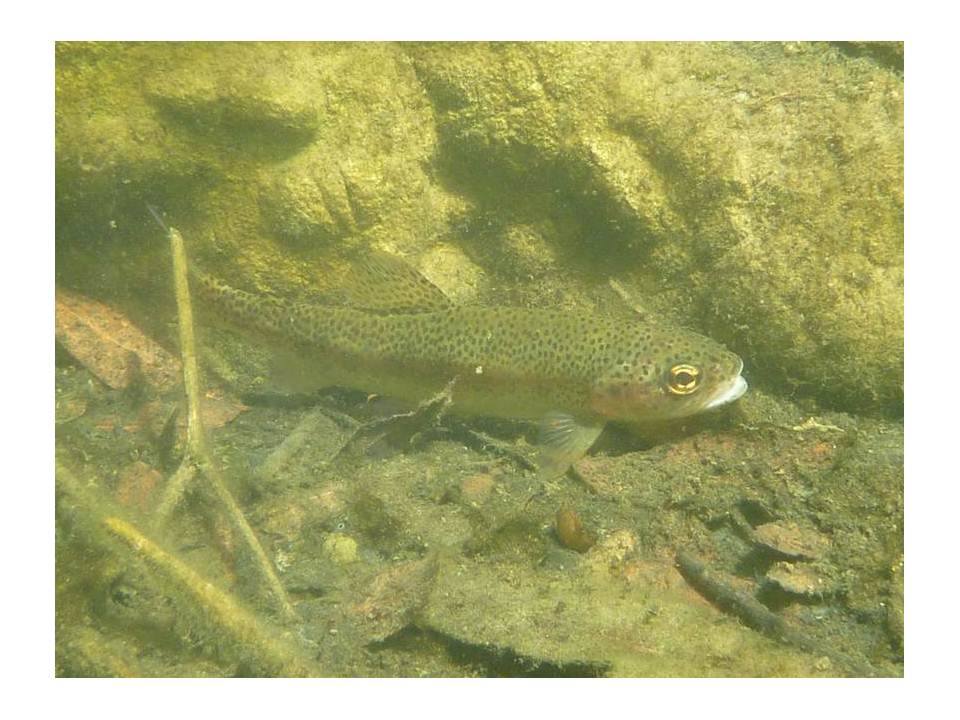 The Southern California Steelhead Trout Recovery Plan (National Marine Fisheries Service (NMFS 2012) estimates that only 500 anadromous (ocean-going) adult steelhead remain of the once tens of thousands that were present between San Luis Obispo and the Mexican border. Dams and other fish passage barriers are some of the greatest threats to the survival of this species.
Photo: RCDSMM Stream Team 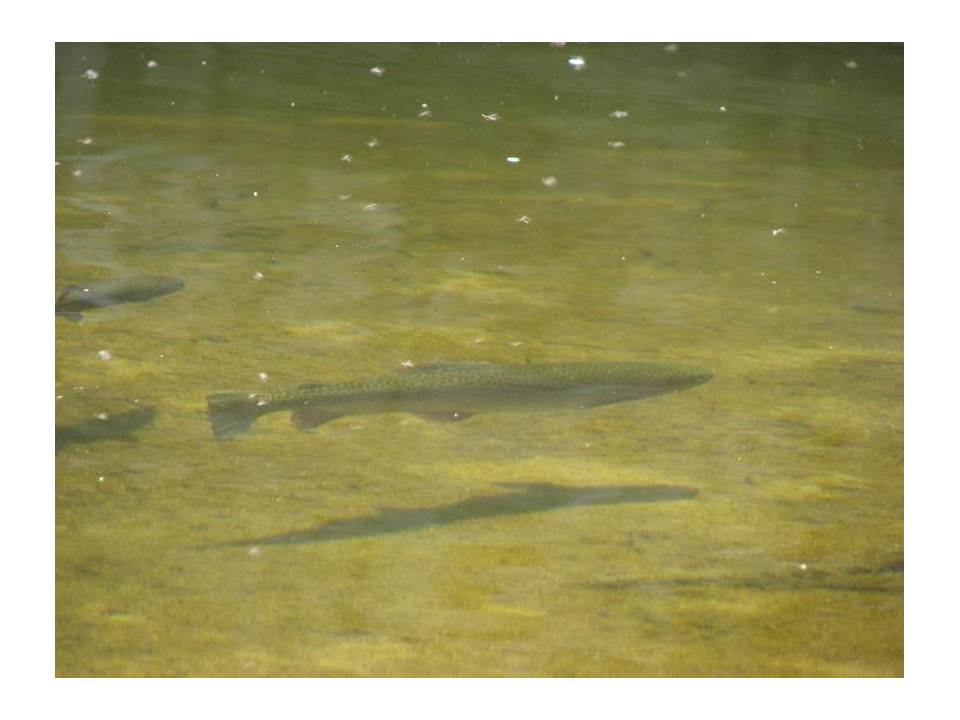 Southern steelhead are unique – they have several life history stories. Some fish, called “fresh-water residents” or “rainbow-trout”, stay in the creek, spawn, and never leave. Others, called “anadromous” head downstream with the first rains, explore the ocean for a few years, and return to an accessible creek to spawn. Unlike other salmonids, they live for five to seven years, and can spawn multiple times. Photo: RCDSMM Stream Team 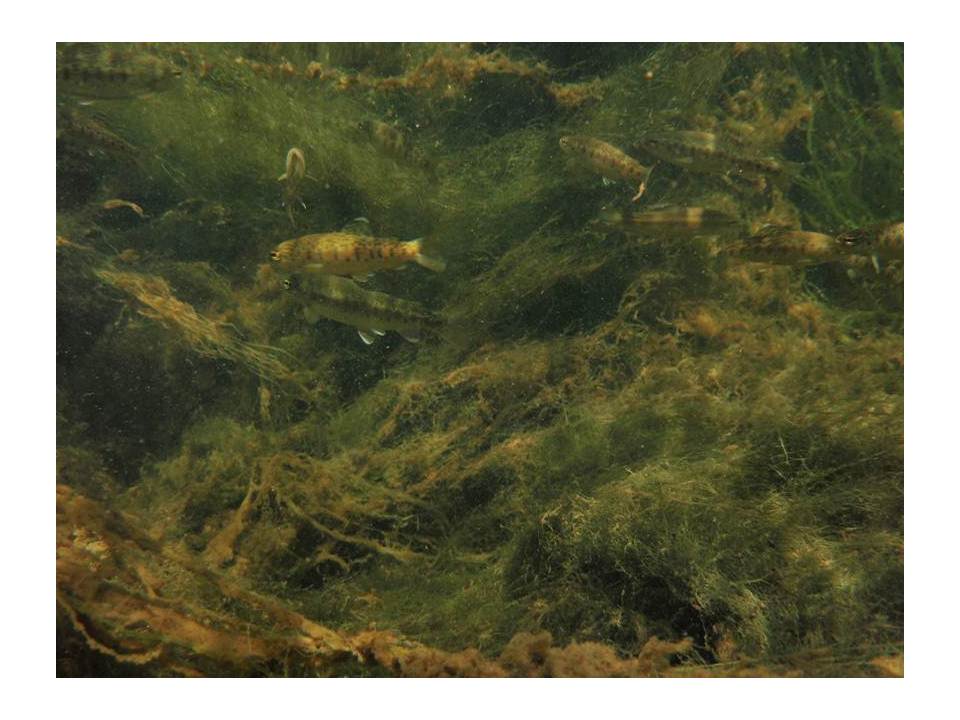 The small young of the year trout emerge in early summer. They find shallow, protected areas along the creek edge and defend their small territory. They feed on detritus, macro-invertebrates and algae. As they grow, their food preferences grow with them, but are very dependent on the bugs living in the creek. Research in the Santa Monica Mountains suggests that fish grow somewhat slowly from emergence until their first winter, but during the winter-spring they can grow quickly. Their growth rate is dependent on adequate food resources as well as supportive water quality. The mortality rate for young of the year is quite high. They are attractive prey for invasive exotic fish predators like largemouth bass, and even adult steelhead. Raccoons, birds and even bullfrogs also hunt young steelhead. A school of juvenile steelhead in Malibu Creek. Photo: RCDSMM Stream Team 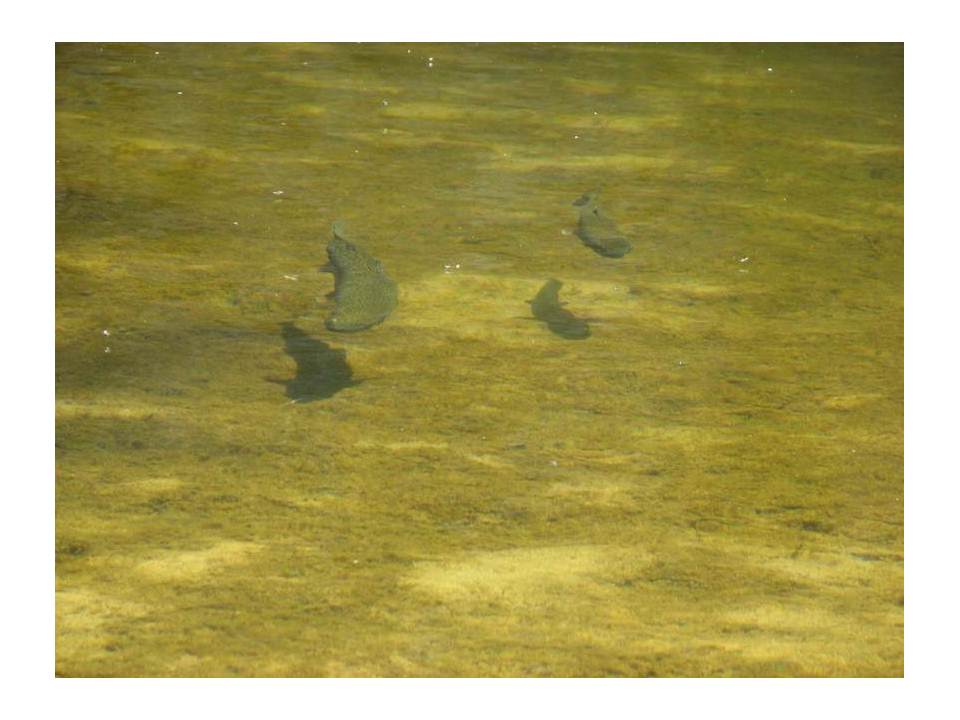 Southern steelhead trout are rainbow trout that have successfully swum downstream as silvery smolts, and then made the transition into the ocean. Unlike their brethren that remain residents in the creek, the ocean going trout undergo physical transformation into adulthood - the jaw comes forward, the gills adapt to ocean salinity, the body gets sturdier and bigger, and the rainbow colors fade to a steely gray, hence the name steelhead. Steelhead trout spend two to four years wandering the seas. We don’t really know where they go and what they feed upon. Very few southern steelhead trout have ever been captured in the ocean, so this part of their life story remains a mystery.

At some point, the fish migrate back along the California coast. When a storm drives sediment-laden creek water into the sea, steelhead detect and select individual creeks to enter. The transformation from the high salinity waters of the ocean to the low salinity of freshwater creeks is a remarkable feat. Unlike their northern cousins, southern steelhead trout do not always return to the creek where they were born. They are able to select creeks that are most appealing and/or available. This is a valuable adaptation in southern California, where rainfall is erratic and access to their natal creek may not be possible. Photo: RCDSMM Stream Team


This project was only possible through the generous support of: